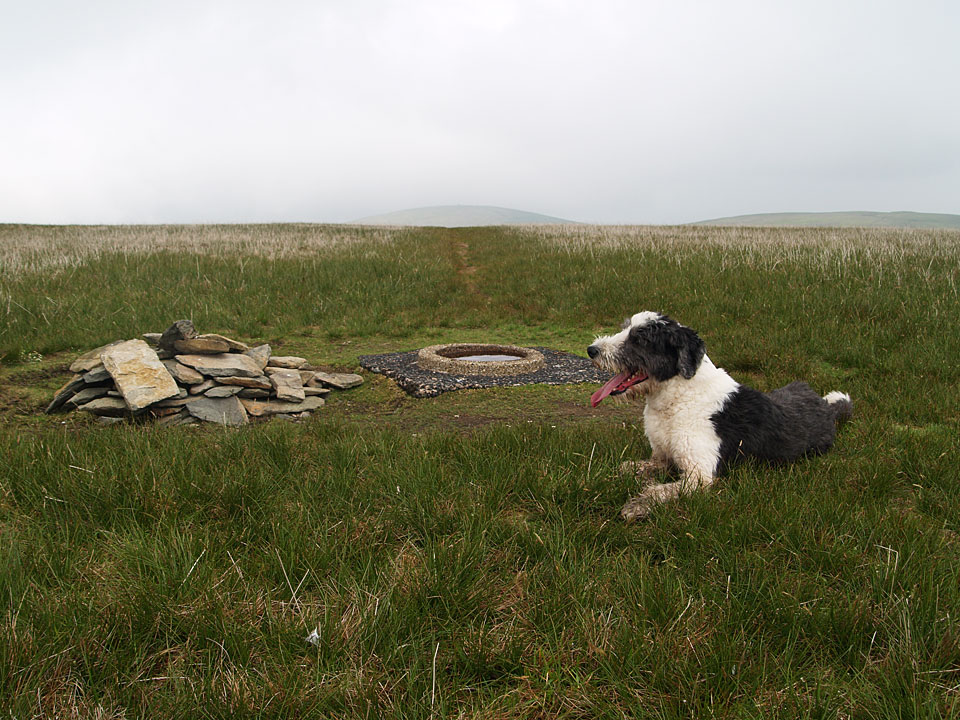 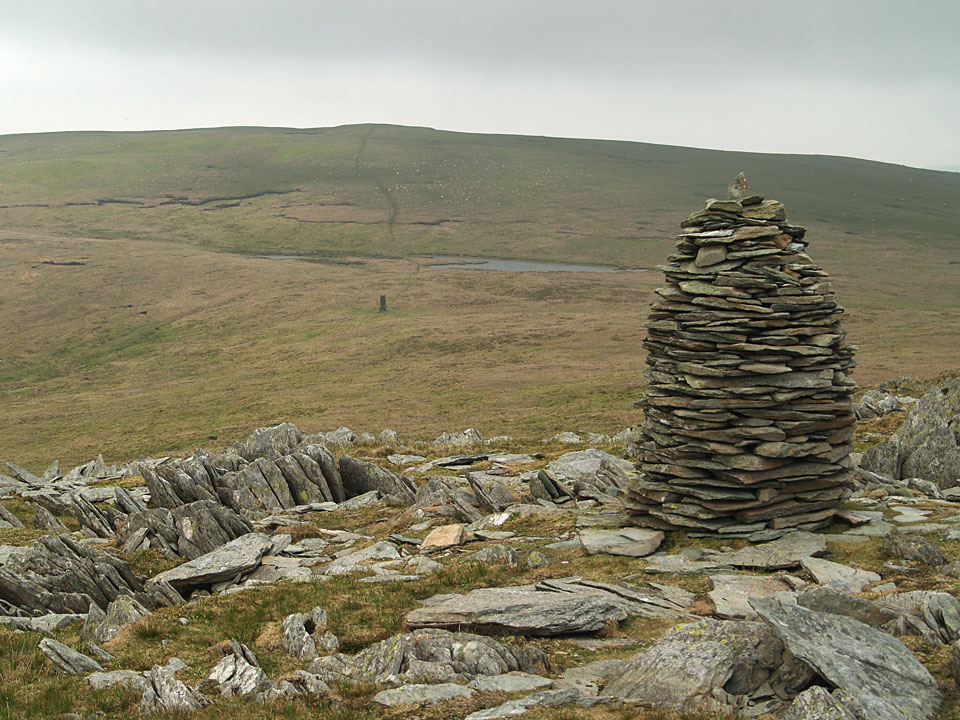 One of the cairns on Artle Crag below Branstree summit

Start Point: Roadside parking near the head of Haweswater (NY 479 119)

What a gorgeous day it turned out to be today – there was an early mist but once the sun burned through it was really warm so I was down to shirt sleeves and it really did feel like a summer’s day. It was just about perfect and the sort of day I have been dreaming about for the last 12 months! 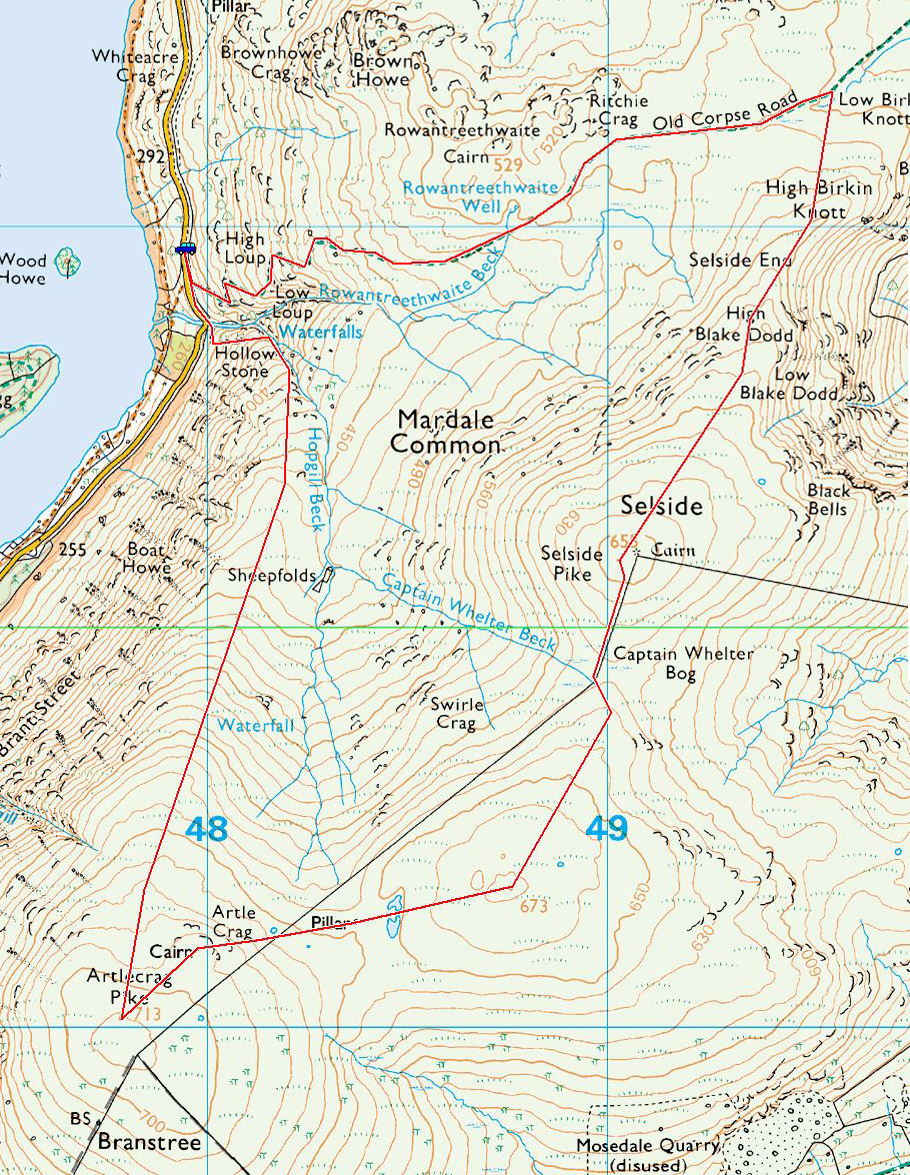 A misty start to the day over Haweswater.

The mist was quickly burning off as the sun rose higher.

Panorama from the start of the climb of the Old Corpse Road.

Looking back along the Old Corpse Road - the nearest ridge is the one used in descent.

Descending from Selside Pike - High Howes is straight ahead and Branstree central.

Looking back to Selside Pike.

Nothing to see on High Howes apart from two old grey monuments.

Passing between the two small tarns with the survey pillar central.

Looking back to Selside Pike and High Howes from Artle Crag - you can see the survey pillar and one of the small tarns centre right.

One of the cairns on Artle Crag.

The summit of Branstree - nothing much to see here either!

How it ended up at the head of Haweswater when all the mist was gone.

Today I had a walk in Longsleddale, one of the remotest valleys around and I certainly saw no-one today. It was wild on the tops today with a strong wind and some heavy showers which coupled with boggy terrain made the going arduous at times – nice to be out for a longer walk once more though and I enjoyed it.

Longsleddale from Sadgill - it all looks a bit ominous ahead.

Beautiful Longsleddale and the River Sprint.

Following the track, Goat Scar to the left and Buckbarrow Crag to the right.

Looking back into Longsleddale, the wind picking up and blowing some rain in now.

The top of Branstree is in cloud, looking across Wrengill Quarry. Once through the quarry the wind really started to pick up and the cloud was almost down to Gatescarth Pass.

Casper puts the handy dog water bowl to good use on the summit of Branstree.

Out of the clag once more on Selside Brow heading for Tarn Crag with more layers on than an onion, plus the obligatory hat and gloves.

...peat hags, typical terrain in these parts, looking into Mosedale.

Branstree looks pretty clear of cloud now looking back from the climb to Tarn Crag.

The survey post on Tarn Crag, the wind is whipping up the water in that puddle.

The cairn on Harrop Pike is clearly visible from the descent of Tarn Crag.

The cairn on Harrop Pike.

Dougal is getting used to the windswept look.

The summit of Grey Crag.

Dougal and Casper on Grey Crag.

Three old men of the fells.

Grey Crag and the survey post on Great Howe.

The easy gully leading back to Sadgill.

A great view of Longsleddale from the descent.

It was sunny and bright first thing this morning with hardly a cloud in the sky – fantastic conditions for a walk around Mardale Head. Once up to High Street, the clouds came in and made it all a bit flat and I felt in hindsight it might have been better walking anti-clockwise…but then again, who knows? You never can tell what the weather will do.

It's a lovely morning with sun shining at the head of Mardale.

The route from the road up to the north ridge of Branstree is certainly initially steep and direct. There is a great view over Haweswater into Riggindale, the rock in the foreground being the Hollow Stone.

High Street with a touch of snow on top from the old sheepfold.

Selside Pike from the north ridge.

The view to the west from the same place.

The summit of Branstree with a hot air balloon over Harter Fell.

Harter Fell from the descent of Branstree. The path used in ascent across Gatescarth Pass can be seen starting from the mid-left.

The path to Harter Fell.

Casper Wainwright (see Harter Fell 10, The Far Eastern Fells below). The benchmark in the Wainwright self-portrait can be seen on the rock in the photo. All you need now is a pipe Casper!

The summit of Harter Fell.

Looking back to Harter fell from the climb to Mardale Ill Bell.

Once on High Street, it started to cloud over. This view is to the western fells with the Scafells and Great Gable in the distance and Helvellyn mid distance on the right. That's an icy looking puddle!

The wall on High Street.

The flat top of Harter Fell from High Street.

Long Stile and Rough Crag, the route of descent.

Blea Water from the snowy eastern edge of High Street.

It has completely clouded over now looking back to High Street and Long Stile over Caspel Gate Tarn from Caspel Gate.

Colourful trees on The Rigg looking along Haweswater.

Autumn on The Rigg.

It has been very wet of late and the weather didn’t promise much today either but I managed to escape the rain for a walk starting from the remote valley of Swindale circling the even remoter valley of Mosedale. There were no views today, the skies were leaden with the merest peep of sunshine. The terrain is generally boggy in this area and I certainly got a good bootful of water today! The remoteness of this area has some advantages though as I only saw one other person all day.

Swindale Head with Selside Pike up to the right, the route of return.

The gash of Hobgrumble Gill.

Moraine in the glacial valley of Mosedale.

The footbridge across Mosedale Beck.

Following the fence to Harrop Pike - it looks a bit gloomy up there today.

The summit cairn on Harrop Pike.

Casper and Angus on Grey Crag. If you find a red collar up here it belongs to Casper - he managed to lose it shortly after this photo.

Heading for a gloomy Tarn Crag across the bog.

The summit of Tarn Crag with a survey column, a remnant from construction of the Haweswater aqueduct, beyond.

Branstree - the route is following the fence steeply up to the wall, the summit lying at the end of the wall.

Casper on the summit of Branstree. Angus thought the sunken dish of the trig. station made a good water bowl! You may have heard about the plague of caterpillars that has struck the Lake District recently. After seeing great swathes of them near Skiddaw House last week I can report that there were even more on the south-eastern slopes of Branstree today.

One of the cairns on Artlecrag Pike, Selside Pike beyond.

The O.S un-named top (Birkett - High Howes) from Artlecrag Pike. In the centre is another survey column with a couple of un-named tarns beyond. I don't know about a plague of caterpillars but there was a plague of gulls on the slopes of this fell seen as white dots in this photo.

The merest glimpse of Haweswater.

Angus and Casper manage a quick swim in the tarns beyond the survey column.

Cascades on the descent to Swindale Head.

This ancient walled track is the Old Corpse Road between Swindale and Mardale.

Today’s walk was a visit to some of the far eastern fells that I haven’t visited for a good while, starting from Longsleddale. Longsleddale is a lovely valley which is very quiet and Sadgill seems very remote at the end of the long valley road. The weather promised much but failed to deliver any sunshine although it was warm. Indeed, there were more than a few spots of rain towards the end.

Looking back to Sadgill on the way to Gatesgarth Pass, the River Sprint meandering down the valley.

Harter Fell from the summit tarn on Branstree.

A glimpse of Haweswater from the survey column between Branstree and High Howes.

Where HAVE you been?!

The survey tower on Tarn Crag, Windermere is in the centre distance.

Grey Crag from yet another survey column on Great Howe.

Angus in the River Sprint beneath Sadgill Bridge.

Started out fine with the snowline being at 500 metres, however on return the snow had made it down to the valley.

Sadgill Bridge at the start of the walk. Five hours later the valley was completely snowbound.

Looking up the lane from Sadgill, Buckbarrow Crag to the right.

Looking along the valley from Brownhowe Bottom, Sleddale Forest in the distance.

The summit cairn of Branstree, well above the snow line now.

One of the large cairns on Artlecrag Pike.

The approach to Selside Pike, High Howes is to the right.

Haweswater appears through the mist on the ascent of Selside Pike.

The summit cairn of Selside Pike.

The Haweswater survey column on the slopes of Branstree in-between two un-named tarns. Artlecrag Pike is behind the column.

...and a close up of the survey column.

The summit cairn of Tarn Crag, near blizzard conditions now.

The summit cairn of Grey Crag - white out!