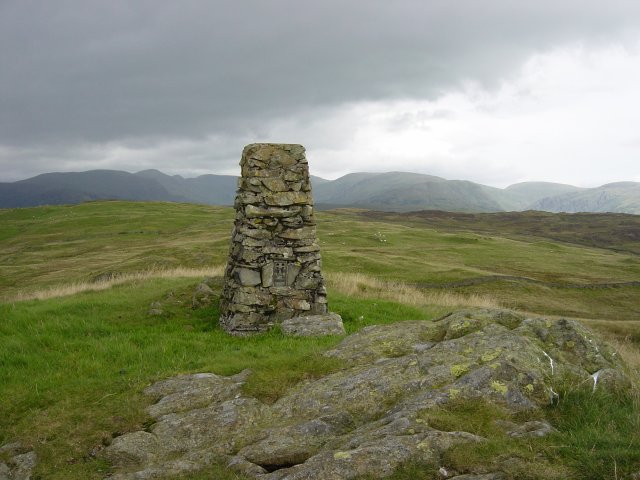 Weather: Started off bright but worsening with one heavy shower.

There are spaces for parking on the back road between Bowston and Staveley 100m beyond Hagg Foot Farm. A footpath signposted ‘Side House’ shows the way from the road, and the grassy path leads through woodland to reach it.

Side House. Round the back of the house, the path follows a walled lane. A 'no access' sign blocks the way of the Wainwright route; another signs points the permitted way to Potter Tarn. It is only a slight detour as you can then follow the wall up and resume the route above Potter Tarn.

Potter Tarn from the ascent to a nameless summit 1262'.

Rocky outcrop en-route to a nameless summit 1262'. Turning left at the rocky outcrop, there are many false summits before you reach the nameless grass summit. Directly ahead lies Brunt Knott, its cairn visible on the horizon.

Potter Tarn and Kendal beyond.

irkstone Pass and The Eastern Fells from a nameless summit 1262'. Following the wall down to a depression, note the wall running through a pool on the right, cross it and head for the steepening summit of Brunt Knott.

Wainwright's 'wall through a pool'.

From Brunt Knott summit: Yoke, Ill Bell and Froswick to the left, the flat summit of Thornthwaite Crag, centre, and Harter Fell, Kentmere Pike and Shipman Knotts to the right. I headed boggily eastwards, over a stile in the wire fence to a junction of walls, crossed it at the stile and then followed another wall to a heathery nameless summit.

The heathery slopes of a nameless summit 1266'.

The Eastern Fells from a nameless summit 1266'. The way to Ulgraves basically follows the line of the walls. I had to hunt for ways through all the cross walls and access here is difficult. On reaching the Ulgraves enclosure, there is gated access and it is a steep grassy climb past the cows to the large cairn on the summit. As I arrived here the heavens opened but there was still a magnificent full length view of the Longsleddale valley.

Looking along Longsleddale from the summit of Ulgraves. From Ulgraves, Gurnal Dubs reservoir can be seen below. I headed for this, crossed a fence and went around the south side of Gurnal Dubs although the path goes either way. The major path takes at its outlet takes you down to Potter Tarn.

Gurnal Dubs. I turned off at Potter Tarn dam outflow, the lovely track passes through woods and past a reservoir (Ghyll Pool) before descending back to the Bowston Road. On the way note the bridge carrying the Thirlmere aqueduct across the stream.