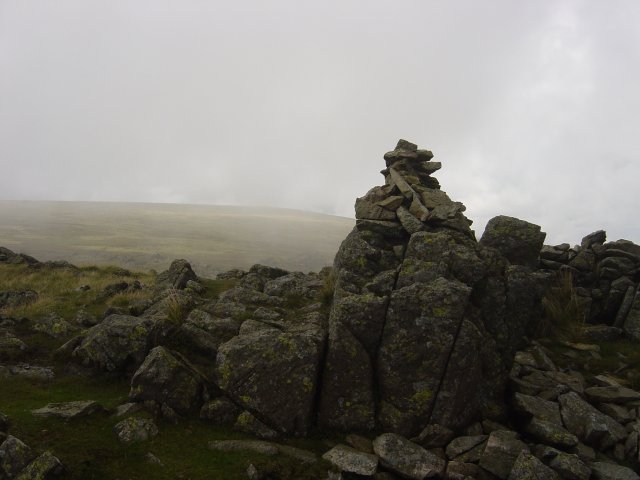 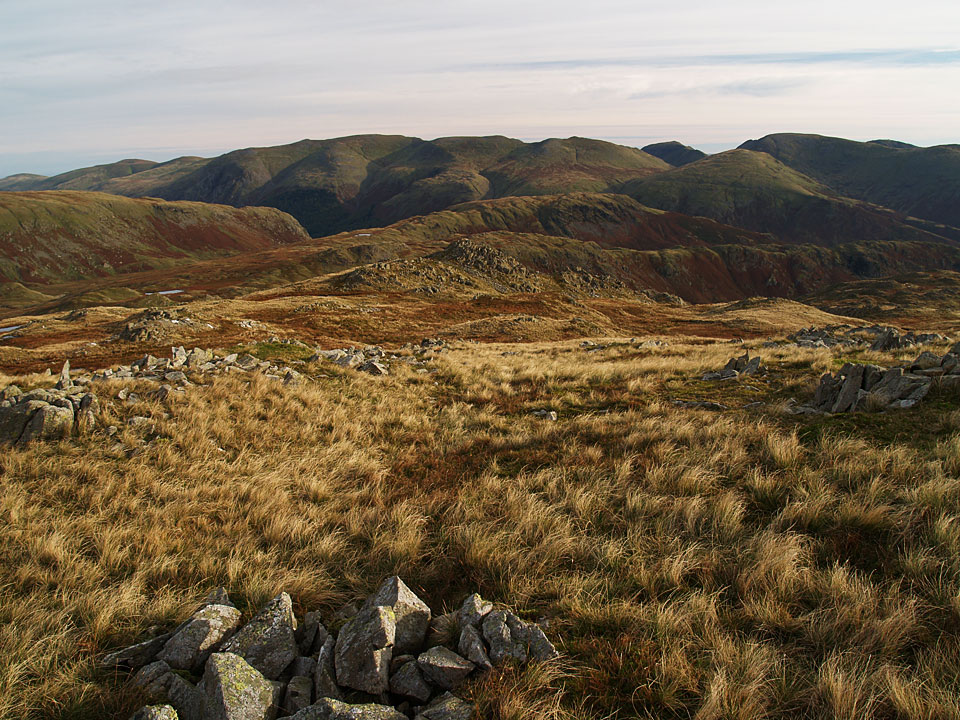 The Helvellyn massif from Codale Head

Today I met up with Andy Lang nice and early for a walk around Easedale and up onto High Raise, the centre of the Lake District. It was very clear this morning but the best of the sunshine was early on and once up onto High Raise the wind was icy. On the way up to Grasmere, all the  stretches of water I passed were covered in a thick blanket of mist – here comes winter.

All was frozen in Easedale before the sun came up...

...but when it did, it certainly gave a lovely golden glow.

Looking into Easedale from the top falls of Sourmilk Gill.

Beginning the climb of the Tarn Crag ridge - the second peak from the left is the summit.

Looking over to Helvellyn from Tarn Crag, Gibson Knott and Steel Fell in the foreground.

Looking into the sun, Grasmere and Windermere under a thick blanket of mist.

Codale Tarn from the Tarn Crag ridge with the Coniston fells beyond.

The Helvellyn massif from Codale Head.

On the skyline are Crinkle Crags, Bowfell and the Scafells with the pointed Sergeant Man in the middle distance.

Great Gable and Pillar beyond the Glaramara ridge from High Raise.

Skiddaw and Blencathra from High Raise, Derwent Water covered in mist. High Raise is the central point of the Lake District and there are great views from here.

A close-up of Skiddaw and Derwent Water.

Casper finds a comfortable place to sit on High Raise.

Fleetwith Pike in the centre with the High Stile ridge behind.

Looking back to the grassy dome of High Raise from Sergeant Man.

Stickle Tarn and Harrison Stickle from the ridge to Blea Rigg.

Looking down on two tarns - Codale and Easedale.

Heading for Blea Rigg, Windermere beyond.

Looking across to Crinkle Crags.

Having a rest on the way to Silver How.

Grasmere and Rydal Water from Silver How.

The Vale of Grasmere, Helvellyn to the left and Fairfield to the right.

The view from the summit of Silver How.

Helm Crag from the descent.

Weather: Dull and grey with the snow showers. 5°C

Looking across to Helm Crag from the steep ascent to Steel Fell.

Lots of OFC members and dogs on the way up to Steel Fell.

Looking across to the snow capped Helvellyn ridge across Dunmail Raise.

Looking back down Steel Fell to Helm Crag with Grasmere beyond with the snow falling now.

Helvellyn across an un-named tarn on the ridge to Gibson Knott.

Brownrigg Moss with Greenup Edge in the distance - the route to High Raise.

The central fells and Bassenthwaite Lake.

Steel Fell just beneath the clouds from Low White Stones.

Crinkle Crags from a frozen tarn below Sergeant Man's summit.

On the edge of Sergeant Man, Stickle Tarn below.

A snowy Saint Sunday Crag and Fairfield contrast against Dollywagon Pike and Seat Sandal with Steel Fell in the centre.

The Lion and The Lamb from the top of the Howitzer, the summit of Helm Crag; Grasmere and Loughrigg Fell beyond.

Grasmere from The Lion and The Lamb.

Today’s walk is a circuit of Grasmere Common, taking in the ever popular Easedale Tarn and the high point of High Raise.

Car parking for this walk is in the village of Grasmere, the popular car park for walks in this area on the Easedale Road has now been transformed into a mini housing estate!

Setting off in bright sunshine (surprising as it was pouring down earlier), I followed the Easedale Road up to Easedale, over the bridge and through an iron gate onto the well defined rocky path.

Helm Crag from Easedale. The path follows the stream with Sourmilk Gill waterfalls visible ahead and ascends adjacent to them. The falls were in full spate due to the amount of rain over the past few days.

Helm Crag from Easedale Tarn. Visible up to the right is Tarn Crag; I crossed Sourmilk Gill where it exits the tarn and followed the path around the tarn and then a diagonal ascent through the bracken to Tarn Crag.

Tarn Crag from Easedale Tarn. The summit of Tarn Crags is not easy to determine at the best of times as there are many rocky knolls, it was made harder as the mist descended over the top as I arrived. The highest point is up to the right as you arrive on the summit plateau.

Tarn Crag summitCodale Tarn, right. Carrying on westerly along the plateau, Codale Head can be seen ahead with Codale Tarn down to the left. There is an easy ascent to the large cairn; the remains of an old fence leads the way to the summit from half way up.

Codale Tarn, right. Carrying on westerly along the plateau, Codale Head can be seen ahead with Codale Tarn down to the left. There is an easy ascent to the large cairn; the remains of an old fence leads the way to the summit from half way up.

High Raise from Codale Head. To the south-west lies the attractive pyramid of Sergeant Man and it is an easy traverse to reach it.

Codale Head and Sergeant Man from the walk to High Raise.

Bright Beck from Sergeant Man. The clouds were lifting now giving fabulous glimpses of Bright Beck and the Langdale Pikes. From Sergeant Man, High Raise was an easy, if somewhat boggy, stroll - there is a trig column on the bouldery summit. From High Raise summit the views were clear - it looked as though it was raining elsewhere, especially over Keswick.

Pike O' Stickle from the summit of High Raise.

Looking across the Langstrath Valley to Glaramara with the High Stile ridge beyond. From High Raise I headed towards Codale Head again; I missed the path here and ended up descending a bit too far to Ferngill Crag. Once I realised my mistake, I contoured across to Broadstone Head and across the Greenup Edge/Far Easedale pass and an easy ascent to the summit of Calf Crag. Here the heavens opened as I arrived and from here on it was a monsoon all the way.

Looking along Far Easedale to Helm Crag from the walk to Calf Crag. Heron Pike is in the distance.

Loughrigg in the centre distance from the summit of Calf Crag. From Calf Crag, it is a pleasant walk along an undulating ridge to reach Gibson Knott, the summit being marked by a large cairn.

Helm Crag from the summit of Gibson Knott. Helm Crag can now be seen in the distance and it is another undulating walk to reach it followed by a sharp climb at the end. Once on Helm Crag ridge, the first large piece of rock is known as 'The Howitzer' due to its appearance from Dunmail Raise. The top of these rocks is the true summit of Helm Crag.

Steel Fell and Dunmail Raise from The Howitzer. Further along the ridge there are two lumps of rock, one large and one small. These are referred to as 'The Lion and The Lamb' due to their appearance from below.

The Lion and The Lamb on the summit of Helm Crag. Carrying on along the ridge, the obvious path descends toward Grasmere. Taking the path at the gap in the wall, down past the houses, across the road to another path which takes you to Easedale and the original path at the start of the walk. From here it is an easy walk back to Grasmere.