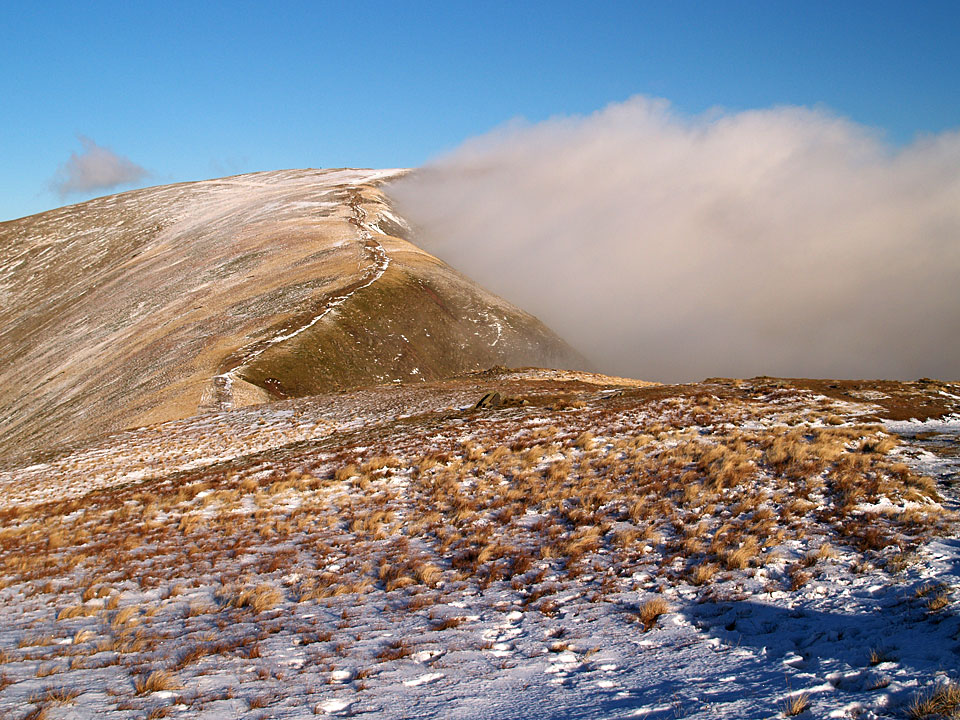 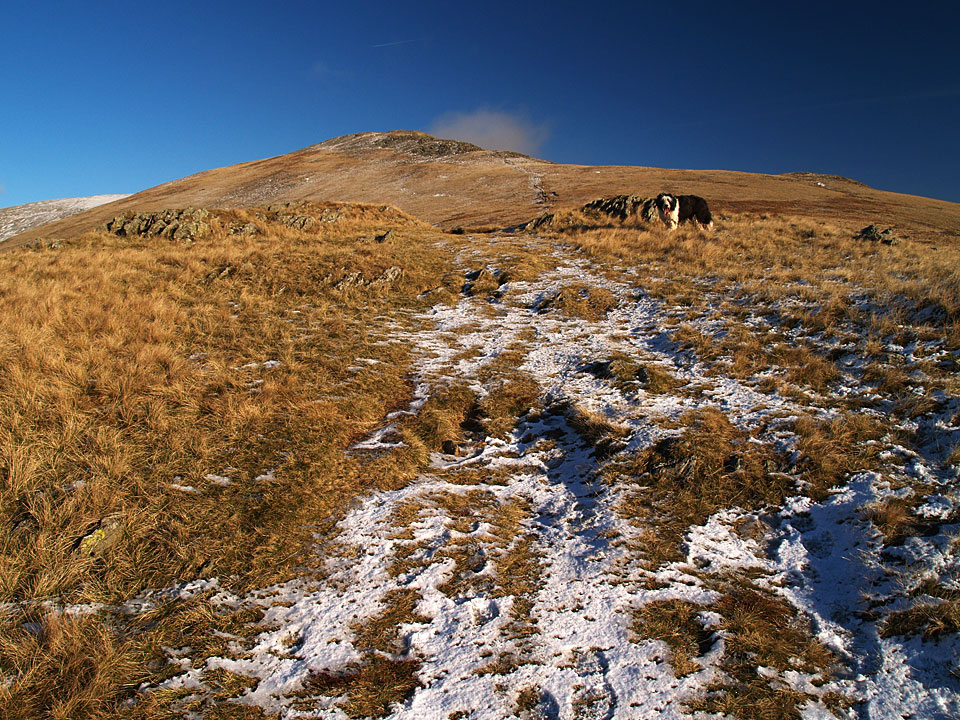 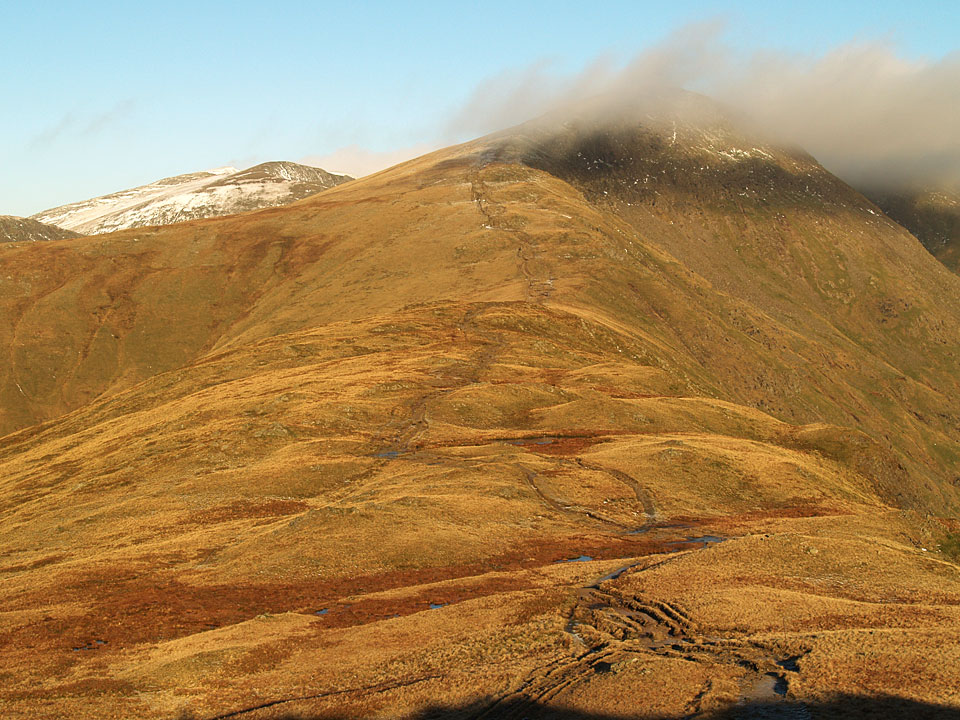 The climb to Great Rigg from Rydal Fell

The weather experts weren’t wrong today, it was an absolutely gorgeous morning for a walk around the Fairfield Horseshoe – one I haven’t done (unbelievably) since 2007. There wasn’t anyone around either until two thirds of the way when we met one or two people. I think this is the last day of the long hot summer as the weather is set to turn over the next few days… 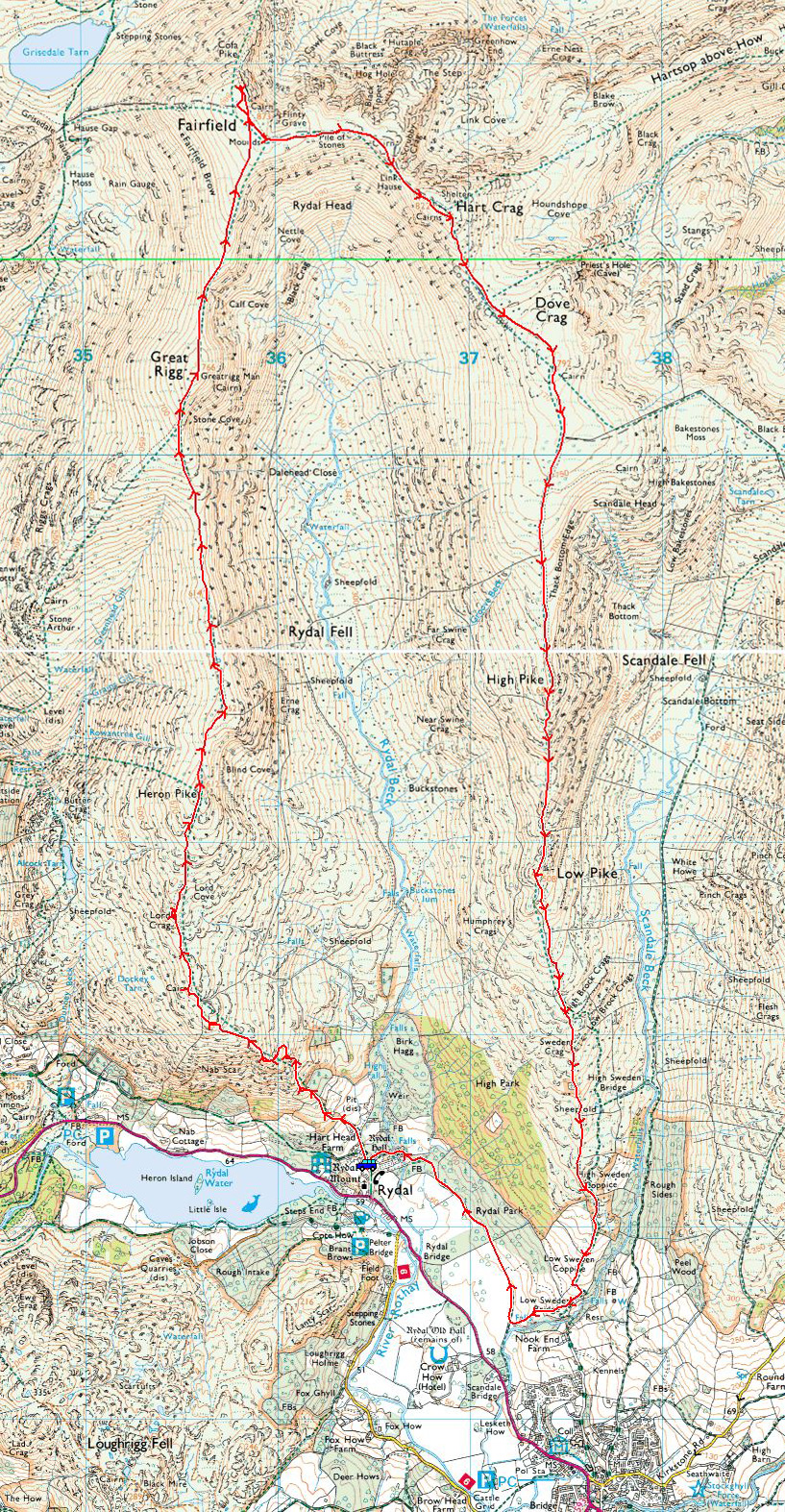 View along the jetty

What a beautiful sunrise

Inversion over Ambleside and Windermere from the climb to Nab Scar

Climbing to the sun, it is a gorgeous morning

The sun is starting to burn away the early mist

Looking back to the Coniston fells, Coniston Water is distant left

Heading for Rydal Fell, Great Rigg and Fairfield ahead

Lapping up the good weather

Grasmere and the Coniston fells

A great view of Dollywaggon Pike, Nethermost Pike and Helvellyn from Fairfield

Windermere and two sentinels of Rydal Head. I'll give you two guesses where Dougal is!

Looking the other way towards Patterdale

The outward leg of the Fairfield Horseshoe from Rydal Park

On the way back we met up with Louise and Fletcher at Fell Foot. He is growing by the day!

It was lovely and clear first thing this morning for a walk of the Fairfield Horseshoe with which I added a slight detour out to Stone Arthur above Grasmere. It was interesting to watch the weather almost constantly changing with clouds forming in the valleys before they lifted as I reached the top of Fairfield. The descent of Hart Crag and Dove Crag was done in very wintry mist with a covering of snow on these higher fells. By the time we got through that, the high cloud had come in to dull conditions somewhat and make it feel even cooler out of the sunshine.

Looking back down to a cold looking Rydal.

Looking over Grasmere to Crinkle Crags and Bowfell.

The summit of Heron Crag. Great Rigg, Fairfield and Hart Crag are covered by a blanket of cloud.

Casper enjoying the warm sunshine on Rydal Fell. Get it while you can!

Hart Crag clears from the cloud for a while.

Great Rigg ahead. I contoured around to the left to take in Stone Arthur.

Looks cold over to Bowfell and the Scafells.

Hart Crag and Dove Crag across a frozen pool.

A panoramic view looking across Rydal to the route of return - Hart Crag, Dove Crag, High Pike and Low Pike

High Raise and Helm Crag across the Vale of Grasmere, from Stone Arthur.

Seat Sandal from Stone Arthur with mine and Casper's shadow on the summit.

Dollywagon Pike through Grisedale Hause between Seat Sandal and Fairfield.

Looking back towards Heron Pike from Great Rigg.

At this point things were happening quickly with the cloud all around. It looked like there was an inversion over Great Langdale way and here too the clouds looked to be forming and dropping into Rydal valley and I had hopes of an inversion here too.

Seat Sandal with the Coledale fells in the distance. Here too the cloud was forming below the summit.

Looking back to Great Rigg from the climb to Fairfield.

Over on Dove Crag, the cloud seemed to be pouring over it into Dovedale.

The cloud over Hart Crag and Dove Crag.

All snowy and bright on the approach to Fairfield's summit.

Dollywagon Pike, Nethermost Pike and Helvellyn - plus of course Striding Edge - from the summit of Fairfield.

A cold wind whipped up whilst we were on Fairfield summit. That put paid to any chance of an inversion today I think.

In the cloud now leaving Fairfield for Hart Crag.

It really was cold between Hart Crag and Dove Crag.

Almost out of the mist now as it was blowing across the fell side here.

A glimpse of the eastern fells through a break in the clouds.

Looking back to Dove Crag from High Pike.

Back in the sunshine now son.

Looking across Rydal to the outward route.

Scandale Beck looks cold in the fading light. It didn't stop my canine companion from having a little dip though!

I knew it was going to be a warm one today – it was 23oC when I set off from Rydal this morning! It was hot and muggy with a welcome breeze on the higher parts, and very quiet up on the Fairfield Horseshoe. Angus and Casper kept themselves cool by wallowing in mud, glorious mud that baked on in the sun, and is proving impossible to get off.

The path to Nab Scar directly ahead.

Looking over Rydal Water to Loughrigg Fell from Nab Scar.

Long legs and a long tongue from Casper.

Wow Angus! Is it really that hot!

Rydal Fell with Great Rigg and Fairfield beyond.

Looking over Rydal Beck to High Pike and Low Pike (the return leg of the horseshoe), Red Screes beyond.

Looking back to Heron Pike and Windermere from Rydal Fell.

The top part of The Fairfield Horseshoe. Select on the image for a larger, annotated version.

The boys enjoy the view.

Cofa Pike and Saint Sunday Crag from the summit of Fairfield.

Casper on the summit of Hart Crag.

Desperate to get cool in the sweltering heat.

Low Pike along the wall from High Pike.

Looking back to High Pike from Low Pike, Little Hart Crag to the right.

Looking over to Nab Scar, Heron Pike, Rydal Fell and Great Rigg on the descent to Ambleside.

The same view from Rydal Park.

After a short lay off, it was good to get back out on the fells today with a classic round – The Fairfield Horseshoe. The weather looked promising but the haze never lifted although it was lovely and warm

From the car park at Ambleside, I followed the A591 to the delightful Rydal Park and walked through here to Rydal Mount.

Scandale Beck in Rydal Park. From Rydal Mount (Wordsworth's old residence) the path is a steep stairway up to Nab Scar. On the way, there is a great view over Rydal Water over to Loughrigg.

Loughrigg and Rydal Water from the ascent of Nab Scar. The summit cairn of Nab Scar is to the left of the main path - it was too hazy for views today.

and the path to Heron Pike. The path climbs again from Nab Scar to Heron Pike and flattens off to reveal a quartz summit stone.

Rydal Fell from Heron Pike summit. Great Rigg, Fairfield and Hart Crag are on the horizon. From Heron Pike, the path descends then ascends again. To the right of the main path at the end of a wall is another cairn. The actual top is not named on O.S maps, only the whole fell. Birkett has named the summit after the fell, namely Rydal Fell.

Heron Pike from Rydal Fell summit. From Rydal Fell, I made a detour from the usual Fairfield Horseshoe circuit by contouring around Greenhead Gill and striding out to Stone Arthur (which overlooks Grasmere) by picking up the main Stone Arthur - Great Rigg path.

Looking along Greenhead Gill to Grasmere.

Grasmere from the summit of Stone Arthur. The tarn on the left is Alcock Tarn. From Stone Arthur, it was back along the main path and a steep ascent to Great Rigg.

The path to Fairfield from Great Rigg summit.

..and again from further along Great Rigg. Fairfield is in easy reach from here.

Saint Sunday Crag from Fairfield summit. From Fairfield it is a rocky descent then another ascent to Hart Crag to begin the return leg of the horseshoe.

Hartsop above How from the rocky summit of Hart Crag. From the descent of Hart Crag, a wall guides you virtually all the way now. It is an easy ascent to Dove Crag from here.

Looking towards Ambleside along the wall from the summit of Dove Crag.

High Pike along the wall.

High Bakestones and Little Hart Crag from the summit of High Pike.

Windermere from the ascent of Nab Scar.

The Fairfield Ridge from Heron Pike.