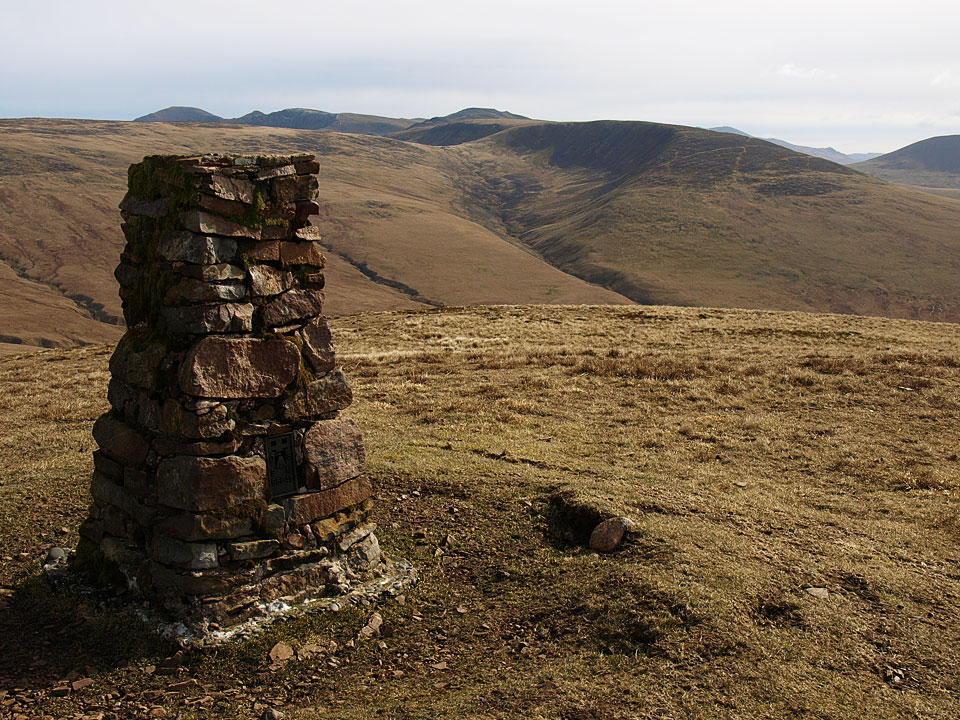 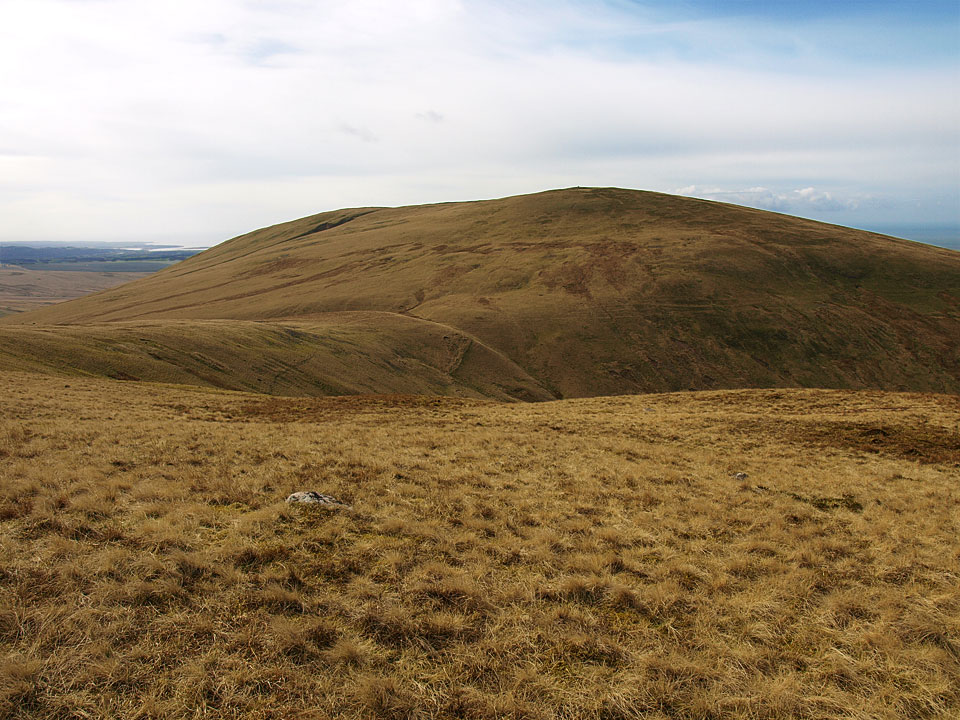 It was damp with a strong wind today making it feel decidedly chilly; I wore gloves throughout which shows how cold it was. There were quite a few showers but at least the strong wind made sure they blew away quickly.

Whoap and Lank Rigg from the climb to Blakeley Raise.

Grike ahead (there is a descent at the midline of this photo, so not quite as easy as it looks here!).

Criffel across the Solway Firth.

Whoap and Lank Rigg panorama - the return leg of the walk.

The summit cairns on Grike.

Ennerdale Fell, to the right is Whoap.

The boggy path to Crag Fell.

Looking back to Grike.

That sky is looking a bit ominous over the high fells at the head of Ennerdale.

Looking back to Whoap from the climb to Lank Rigg.

A panoramic view from the summit.

Wainwrights treasure seems to have moved but there are still plenty of coins - I added by two bob's worth!

Looking out to the west Cumbrian coast, Sellafield in view.

The summit of Lank Rigg.

Blakeley Raise from the descent.

Grike and Crag Fell from the direct descent of Lank Rigg - I could see where the car was from the top so I went for it. I knew it would be a bit boggy going this way but the heavens opened too making it a bit of a damp affair. Then I had to cross the River Calder...good job it wasn't far to the car after that! On the way home, you guessed it...

Weather: Sunny with slight haze but cool on the tops. 8°C.

This was another area I have left too long to visit since the last time I was here in 2004. The weather was much better than on any previous visit but the breeze had a cold edge to it and gloves were required throughout. Nice to see the hidden treasure had made a reappearance on Lank Rigg once more.

Dent from the start of the climb to Blakely Raise from the Cold Fell road.

Grike from the top of Blakely Raise.

The fells that are to be the return leg later, Whoap and Lank Rigg.

Frog spawn under ice on the descent from Blakely Raise.

The Calder Valley and Cold Fell with the towers of Sellafield in view over the top.

Flat Fell and Cleator Moor from the climb to Grike.

A silhouette of Pillar, Scoat Fell and Steeple beyond Iron Crag on Ennerdale Fell. My route after Crag Fell was to descend through the trees and climb with the wall to the kink, then head of to Whoap on the right.

The north-western fells from the summit of Crag Fell.

Looking back to Grike.

The view to the north across the end of Ennerdale Water.

Ennerdale - the High Stile ridge to the left and Pillar to the right.

Ennerdale Fell with Pillar beyond.

Crag Fell and the Ennerdale Fence.

The solitary boulder that marks the top of Whoap, here looking across Great Borne to Grasmoor.

Caw Fell with Haycock beyond and Seatallan to the right.

A view through to Grasmoor from the climb to Lank Rigg.

Another muggy, overcast day today and a walk where solitude is virtually guaranteed on the western fringe of the Lake District – a round of the Lank Rigg group of fells.

The walk starts from The Cold Fell road where there are plenty of verge parking places available. I made a direct ascent from the road up the grassy slope of Blakely Raise.

Grike from Blakely Raise summit. From the summit, I followed the fence down to a sheep intake and a gate which had to be climbed as it would not open and onto the main forest road. Following the road to a gate on the left, it was then up more grassy slopes to the summit of Grike, stepping over a wire fence en-route.

Crag Fell and Great Borne from the summit of Grike. An easy descent past a weather station and then a simple climb took me to the summit of Crag Fell with Ennerdale Water below and silhouettes of Pillar, Scoat Fell and Haycock visible through the murk.

Herdus and Great Borne with Starling Dodd to the right across Ennerdale Water from Crag Fell.

Looking to the head of Ennerdale Water from Crag Fell, the High Stile ridge to the left and Pillar just visible on the right. I followed the track down another easy descent to a forest fire break, through the break and over a stile to the stone wall of the Ennerdale Fence. This wall continues for many miles over many summits.

The Ennerdale Fence. I followed the fence until the first gate and then swung right to ascend another grassy slope, Whoap.

Lank Rigg from the stone marking the summit of Whoap. From Whoap, another descent to a dip and then steeply up to the summit Lank Rigg, the high point of this round.

Whoap from the summit of Lank Rigg. From here, I passed an un-named summit tarn and then descended past an ancient cairn on a grassy track between the rocks. Across the very wet Poukes Moss to an un-named grassy mound on O.S maps - Birkett has christened it Kinniside.

Latter Barrow from the summit cairn on Kinniside. From here it's an easy traverse to Latter Barrow, clearly visible ahead.

Kinniside and Lank Rigg from Latter Barrow. From Latter Barrow, I had a steep descent to the River Calder, decisions-decisions on the best place to cross and then steeply up the bracken slopes to Swarth Fell. For this part of the journey I was accompanied by a buzzard soaring overhead - I'm not sure if he thought I was on my last legs...

and a buzzard circles overhead

Lank Rigg, Kinniside and Latter Barrow from the summit cairn of Swarth Fell. From Swarth Fell it is an easy descent to Burn Edge, the summit is marked with scattered stones. From here, all the fells of the completed round can be seen - a great viewpoint.

Crag Fell and Whoap from Burn Edge. From Burn Edge, the grassy shoulder leads directly down to the road and the start point of the walk.