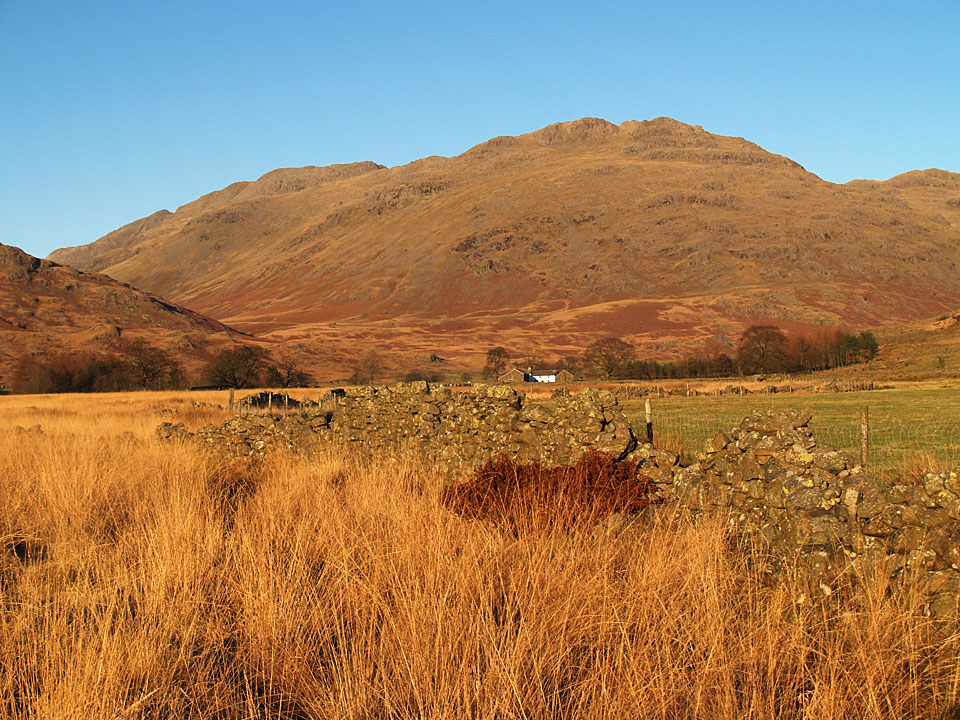 Little Stand and Crinkle Crags from the Duddon Valley 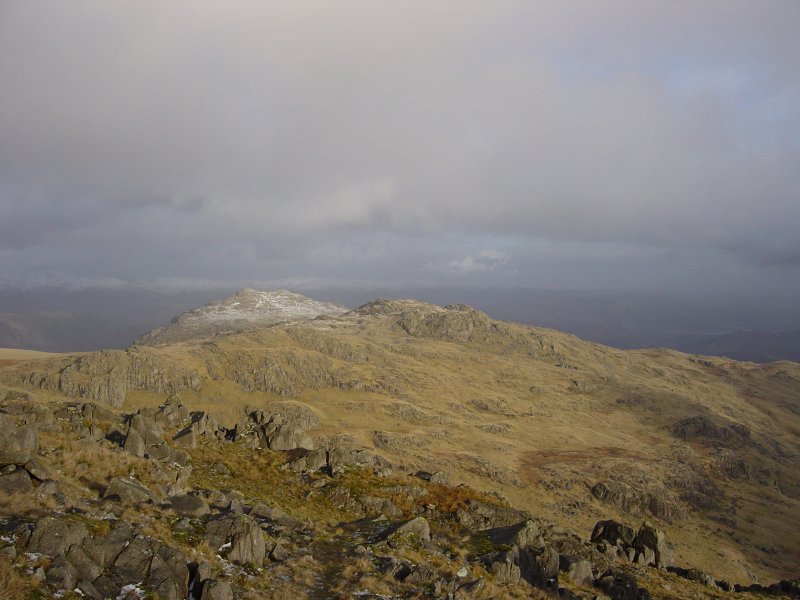 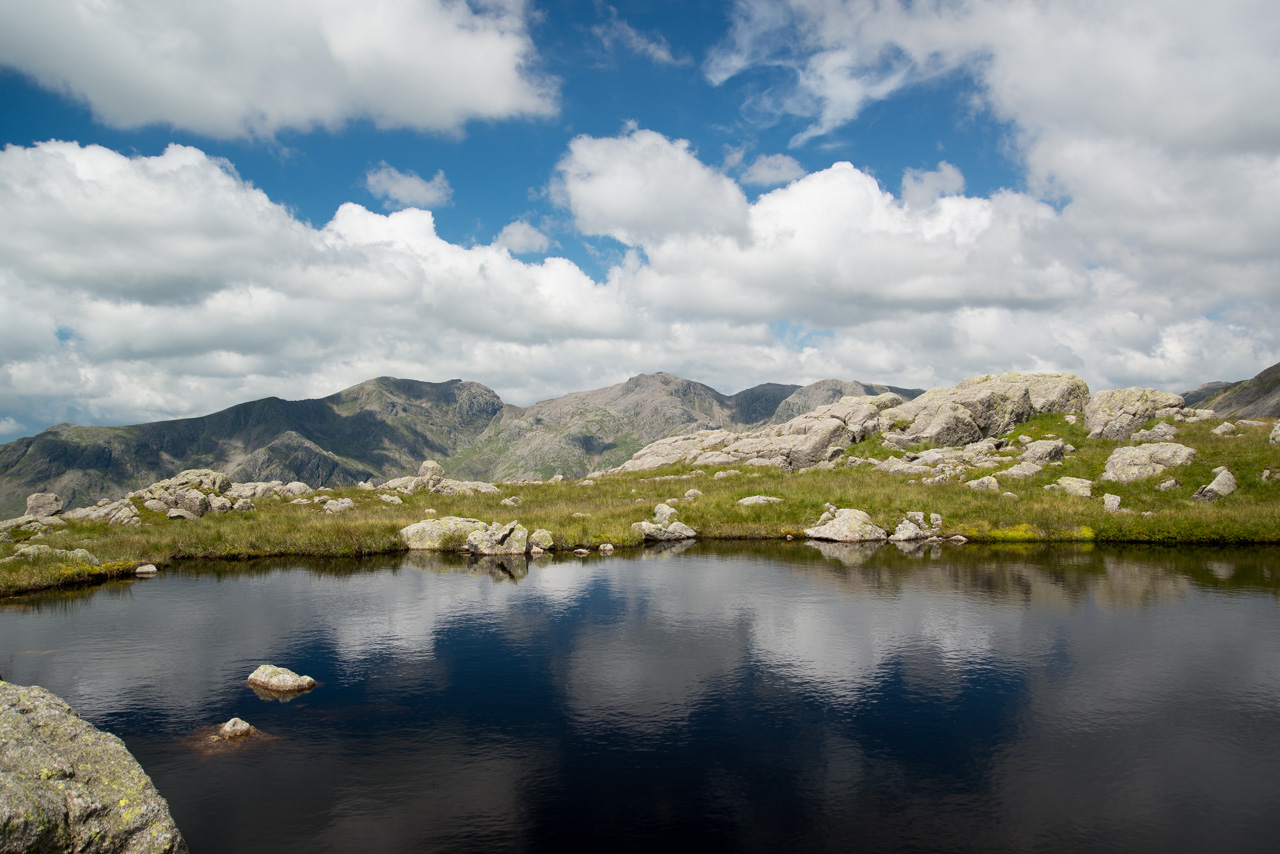 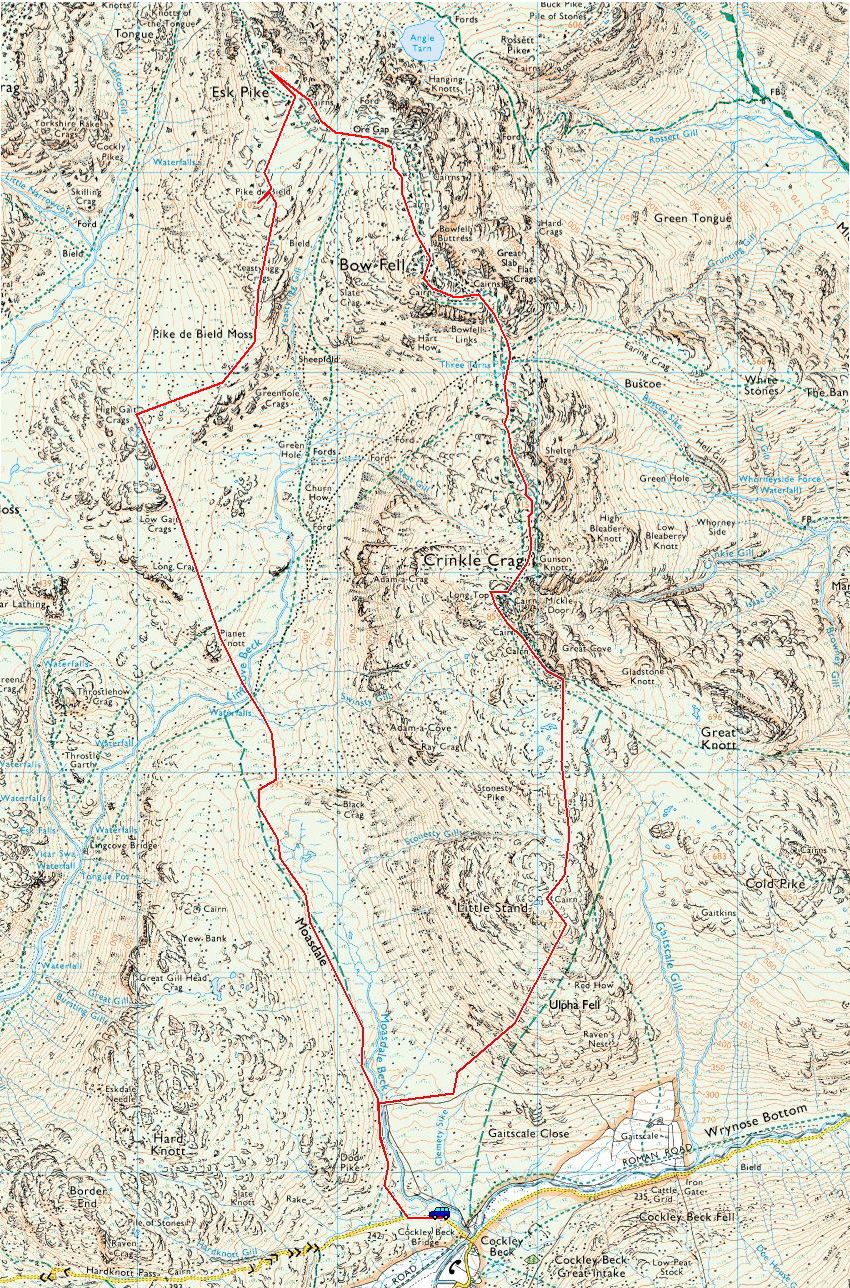 The weather looked promising early on, but alas it was not to be. You have to accept that you cannot always get clear days on the fells and today was one of those days. I had an early start from Cockley Beck and it was probably too early as everywhere seemed to be a lot brighter by lunchtime. No views to take photos of today…

Whitfell and the Duddon Estuary.

Black Combe. Who knew what the day would bring, it certainly looked promising if the low level mist would rise - enventually it did, but it was just not far enough!

Lingcove Beck. The walk through Moasdale had been a boggy affair and this view was about the best of the day since the start of Moasdale. Once up the steep section to Three Tarns there were still no views and the wind and rain really whipped up so I decided to miss out my intended traget of Bowfell and carry on across Crinkle Crags. That was a good navigational exercise, as ever!

Casper on Long Top, the summit of Crinkle Crags.

A wet looking Bad Step from below. I was completely sodden now.

As if by magic...the clouds parted on the descent from Little Stand.

Harter Fell and the Hardknott Pass road snaking beneath it.

As if you aren't wet enough already Casper. I think I'll come and lie down in there with you and see if I can dry off a bit!

I wasn’t sure how it would turn out today as it was a bit overcast when I set off for Bowfell from Cockley Beck at the head of the Duddon Valley. It turned out to be a fantastic day in real winter conditions and this is just how I like my walking – the going was rough, rugged and remote and the weather was quite changeable with lots of sunny spells but there was still a strong, icy cold wind. Not to worry though, it is winter after all! The icing on the cake was the climb to Bowfell in fresh snow and under a blue sky – just heaven. Thankfully I managed to get the settings in the new camera right today as well after a bit more messing about. Hopefully they will not need too much tweaking from now on.

An interesting prospect in view - Bowfell, Crinkle Crags, Little Stand towering above the Duddon Valley and the River Duddon.

Ulpha Fell at the start of the walk.

Little Stand from Moasdale. The final route of descent later was along the diagonal scree gully running left to right at the right of the fell.

First sight of the high fells from the rise up from Moasdale, the Scafells covered in cloud. Esk Buttress is directly in line with Casper. I got pelted in a hail shower along here which didn't give me great hope for the rest of the days weather - but you never quite know how it will turn out...

A close up of Esk Pike with Yeastyrigg Gill running up to Ore Gap on the right.

Following Lingcove Beck heading up to the right to Three Tarns below Bowfell.

Casper checks out the way to Bowfell - yep, all the way up there!

One of the Three Tarns, completely frozen and the view to the Scafells obliterated by the low lying cloud.

Suddenly it is all starting to look good on the climb to Bowfell from Three Tarns. It was fantastic here being the first to climb the virgin snow, sometimes up to knee depth and then the sunny spells and blue sky making the day a real joy to be out.

Looking eastwards over the Langdale Pikes and a smattering of snow on the highest fells.

It all looks a bit dark over that way - Bowfell's summit is to the left. Who knows what Casper is up to?!

A snowy Great Slab on Bowfell.

Heading for the summit of Bowfell.

A superb view into Great Langdale and to Windermere from the summit of Bowfell.

Crinkle Crags, the way we are heading next from Bowfell. Beyond the Coniston fells remain in cloud.

First to the top today Casper!

The Langdale Pikes in another sunny spell.

A view into Langstrath, Eagle Crag and Sergeant's Crag in the centre.

A black and white view to the south-east.

Descending back to Three Tarns, which can be seen below with Crinkle Crags beyond. Descending this section I met a couple of 'lads' climbing to Bowfell. We had a chat and talked about a few mutual acquaintances, but the thing that struck me was their ages - 75+ if they were a day! I hope I'm still going strong at that age! (Their advice to me? 'Keep out of the wind at your age'! I don't know if that means because I am old or because I am (to them) young).

The Langdales from Shelter Crags.

The summit of the Fifth Crinkle, Gunson Knott.

Climbing to the Second Crinkle looking at the Third (right) and Fourth (left).

Long Top, the Second and highest of the Crinkle Crags.

The summit of Long Top.

Bowfell from the secondary summit cairn.

The First Crinkle from the top of the 'Bad Step'.

Looking back up to the Bad Step (centre). The climb or descent is to the right of the chock stone.

Fleeting clouds across Little Stand and the Coniston fells from the First Crinkle.

All is frozen on Stonesty Pike.

Wetherlam across a frozen tarn on Little Stand.

Sunburst over the Duddon Valley, Harter Fell to the right.

The Scafells from the steep descent from Little Stand. Still under cloud but it did seem to lift during the descent - here Slight Side on the left is clear now.

Great Carrs and Grey Friar finally get to see the light of day across the Duddon Valley.

Today was an almost unseasonally warm day, just like midsummer. I had a walk from Cockley Beck at the head of the Duddon Valley up to Bow Fell and back along the Crinkle Crags. I had forgotten how rough the terrain was, especially for a dog, but Angus seemed to take it all in his stride. There isn’t a full set of photographs today as the camera battery decided to give up along the Climbers Traverse on Bow Fell – I must remember to recharge it in future! Hopefully the photographs I did manage to capture show the flavour of the walk terrain and conditions.

Little Stand and Ulpha Fell from Moasdale. The final route of descent was straight down the middle which was very rough - not recommended.

Looking back along Lingcove Beck from the approach to Three Tarns.

The Scafells across one of the Three Tarns.

The Crinkle Crags across Three Tarns from the climb to Bow Fell.

Angus on the summit of Bow Fell.

One man and his dog looking down The Great Slab on Bow Fell.

The Langdale Pikes across the infeasibly angled Great Slab of Flat Crags.

The Langdale Pikes and Mickleden from the Climbers Traverse.

Weather: Mainly clear interspersed with cloud and a biting wind on the tops. Snow above 600m.

Esk Pike and Bow Fell from above Lingcove Beck.

The River Esk and Great Moss from Pike de Bield.

The Langdales and Mickleden from the ascent of Bow Fell.

A contrast in colours - Lingcove Beck from Bow Fell summit.

'The Bad Step', right of centre, used in descent from the second Crinkle.

The Crinkle Crags from Stonesty Pike.