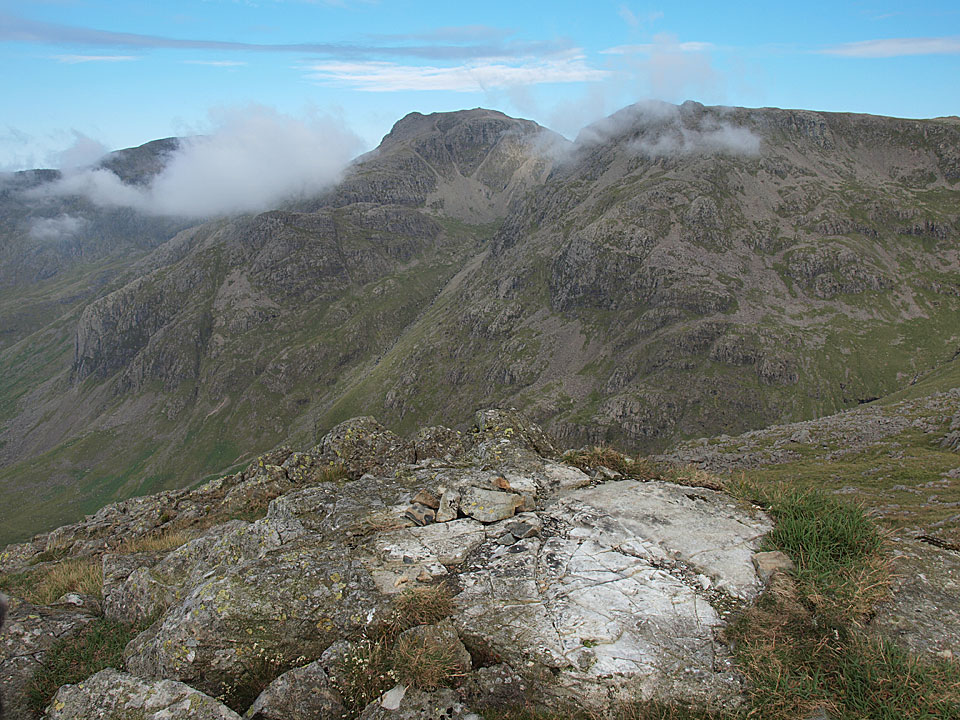 Today’s weather promised much but ended up being a mixed bag with clouds swirling in and out throughout the walk. Despite this it was really still and warm and very clear making it a good day to explore this quiet and remote area at the head of Eskdale.

Heading into Moasdale it looks like a promising morning.

Looking back to Grey Friar across Cockley Beck.

First sight of the Scafells. Mmm, they look quite tempting!

A great sheet of cloud was moving across from the east by the time I reached the head of Moasdale, Esk Pike and Bowfell ahead.

The route to Esk Pike is along the central ridge via High Gait Crags and Pike de Bield Moss.

Pike de Bield Moss, the route to Esk Pike via the south ridge.

The heads of state - Scafell and Scafell Pike.

On the summit of Pike de Bield. It was interesting to see how the clouds were forming around Scafell as I climbed.

The route to Esk Pike from Pike de Bield, clear for now but by the time I got there it was enveloped by clouds.

Looking through the mist to Bowfell, right.

Skiddaw and Derwent Water across Glaramara.

The clouds swirling around Scafell Pike.

Angle Tarn and Rossett Pike from the descent to Ore Gap.

A panoramic view across Ore Gap to Esk Pike from the climb to Bowfell.

Looking northwards from Bowfell, that way looks to be the clearest today, from Grasmoor to Skiddaw.

The summit of Bowfell.

The Langdale Pikes beyond The Great Slab of Flat Crags.

Crinkle Crags through there somewhere.

Shelter Crags and Crinkle Crags from the descent to Three Tarns...and there are three tarns again too!

Bowfell from the climb to Shelter Crags.

Shelter Crags and Bowfell from the fifth Crinkle, Gunson Knott.

Clearing over the Scafells once more but Dougal is too busy planning our route to look. The central darker ridge is the one used to climb Esk Pike.

The first and second Crinkle from the third.

Crinkle Crags Tarn, at 854m it is the highest tarn in the Lake District and in England.

At the foot of the Bad Step.

Back into Moasdale looking at Bowfell and Crinkle Crags.

Weather: Mainly clear interspersed with cloud and a biting wind on the tops. Snow above 600m.

Esk Pike and Bow Fell from above Lingcove Beck.

The River Esk and Great Moss from Pike de Bield.

The Langdales and Mickleden from the ascent of Bow Fell.

A contrast in colours - Lingcove Beck from Bow Fell summit.

'The Bad Step', right of centre, used in descent from the second Crinkle.

The Crinkle Crags from Stonesty Pike.