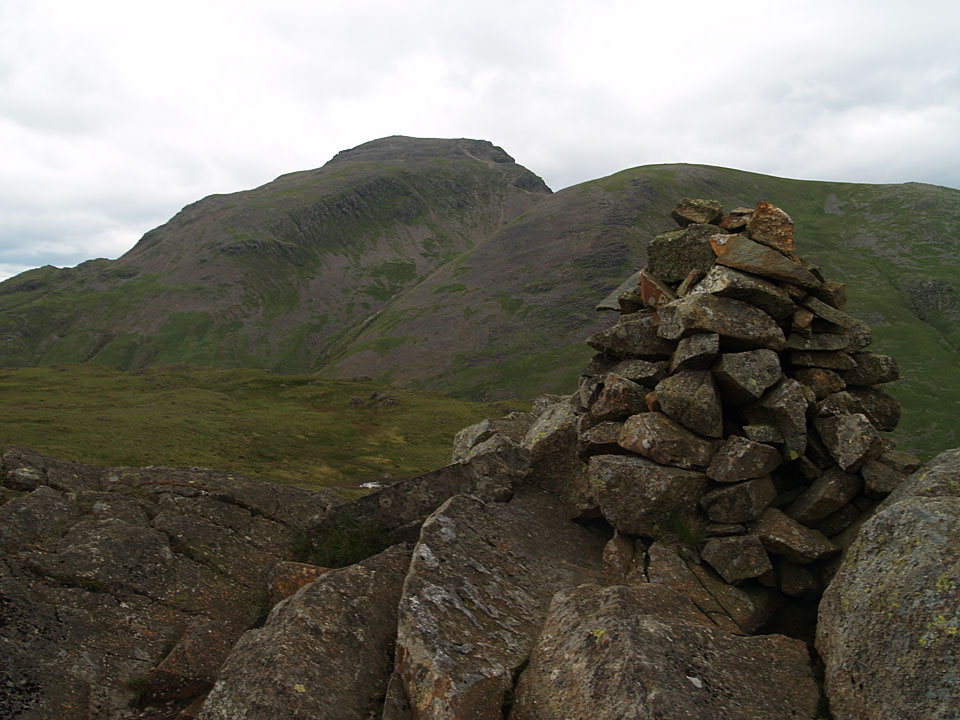 Great Gable from the Wainwright summit of Seathwaite Fell 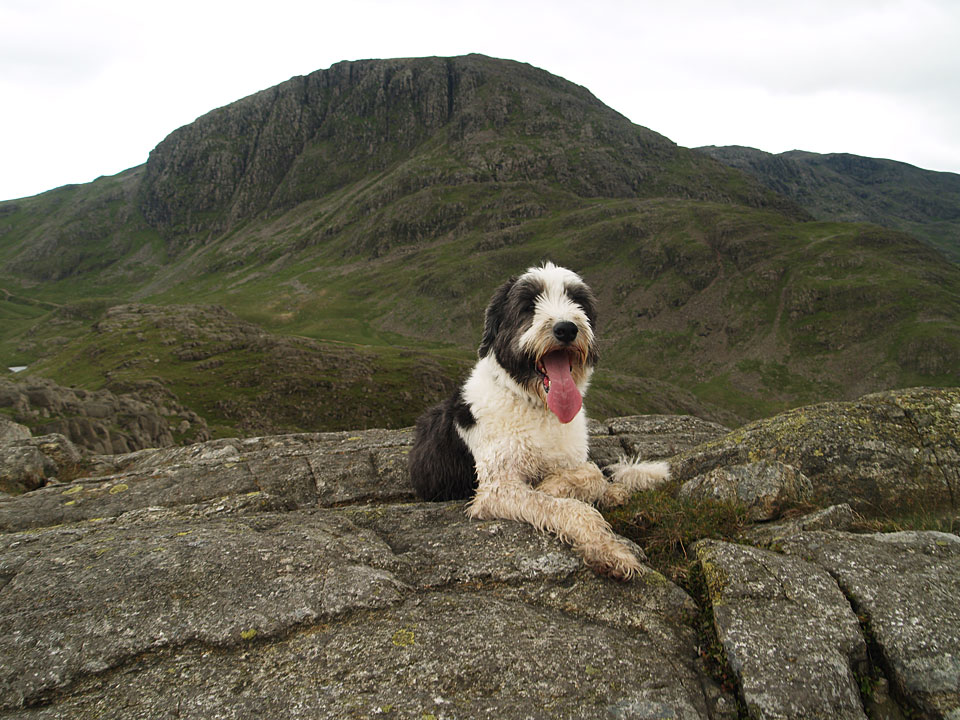 Casper on Great Slack, the highest and true summit of Seathwaite Fell with Great End behind

It’s a while since I have done these fells and it was nice to get back there for a visit. The weather was constantly changing and the summits were very windy with the clouds constantly blowing in and off. There was quite a number of dead sheep around today, a grizzly consequence of the heavy snowfall not so long ago.

Base Brown from Seathwaite.

Seathwaite Fell and Base Brown.

Early morning light at the top of Sour Milk Gill.

Borrowdale from the northern slopes of Base Brown.

Great and Green Gable from Base Brown.

Heading for Green Gable across Blackmoor Pols - it looks like Dougal has already been!

Looking back to Base Brown.

Great End and Skew Gill from the descent.

Dougal in traditional pose on the stretcher box.

The Wainwright summit of Seathwaite Fell from Great Slack, the highest point.

It was very windy along here but there is blue sky over Keswick way.

At least it was dry today but there was really rather a chilly wind on the tops today; it felt more like Autumn than summer. I parked at Strands Bridge this morning rather than the more popular Seathwaite, preferring to do the flat section first rather than last as I find it makes a good warm-up and the alternative car parking place was a lot quieter. Casper’s fame must be widening too as we were recognised by a party of walkers on Combe Head who were big StridingEdge fans – sorry, no Angus today!

Is this the right way? Following the Allerdale Ramble to Seathwaite from Strands Bridge, Base Brown ahead.

Base Brown looming large over Seathwaite.

Borrowdale from the steep climb to Seathwaite Fell.

Glaramara from Aaron Crags. The great cleft is Red Beck.

Great Gable from the Wainwright summit of Seathwaite Fell.

Looking north from Seathwaite Fell with a glimpse of Derwent Water.

Casper has a dip in the summit tarn on Seathwaite Fell, Great Gable and Green Gable beyond.

Casper on Great Slack, the highest and true summit of Seathwaite Fell with Great End behind.

A peep into Wasdale - Yewbarrow with Seatallan behind and Red Pike right.

The Langdale Pikes and Windermere.

Casper checks out the way ahead to Glaramara from Allen Crags.

Seathwaite Fell with Great and Green Gable behind.

Looking over to the north-western fells.

Skiddaw, Blencathra and Derwent Water from the summit of Glaramara.

The Combe and Rosthwaite Fell from Combe Head.

The rocky turret of Rosthwaite Cam.

Great Gable with one or two people on the top by the look of it.

The sunshine lights up Bessyboot and Tarn at Leaves from Rosthwaite Cam.

Tarn at Leaves. Bessyboot, the summit of Rosthwaite Fell is beyond the tarn to the left.

Today’s walk is another great one along that undulating, rocky ridge of Glaramara. The walk started and finished steeply with a harsh climb up to Seathwaite Fell and a straight down descent from Glaramara.

The sun shone brightly today with temperature reaching a heady 20oC with only a slightly cool breeze reminding me that it is still early on. However, this was the first airing of the year for my Lily-white, winter conditioned legs in shorts – a nice feeling – and the whole walk was completed in shorts and tee shirt only.

Seathwaite fell from the path to Stockley Bridge.

Glaramara from Seathwaite Fell whilst Angus finds a puddle to wallow in.

Great Gable and Green Gable across one of the many summit tarns on Seathwaite Fell. Can you spot the duck?

High House Tarn, the Langdale Pikes in view to the right.

Looking back to High House over Lincomb Tarns from Lincomb Head.

The main summit of Glaramara from Looking Stead, where Angus takes a break...

The hazy view from Glaramara.

Looking back from Seathwaite, the Glaramara ridge to the left, Seathwaite Fell on the right.

Clear and bright becoming hazy later in the day.

Great Gable across Sprinkling Tarn, the wettest place in England.

The Langdale Pikes from the summit of Rossett Pike.

Bessyboot across Tarn at Leaves.

Rosthwaite Cam across Tarn at Leaves from Bessyboot, the summit of Rosthwaite Fell.