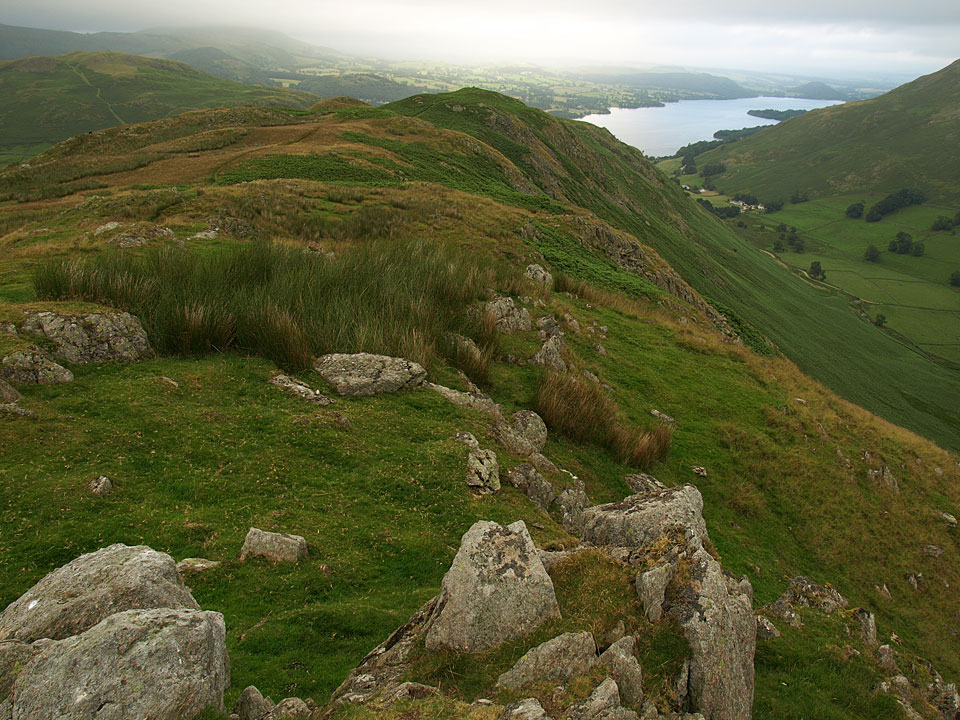 The view of Ullswater from Pikewassa, the summit of Steel Knotts 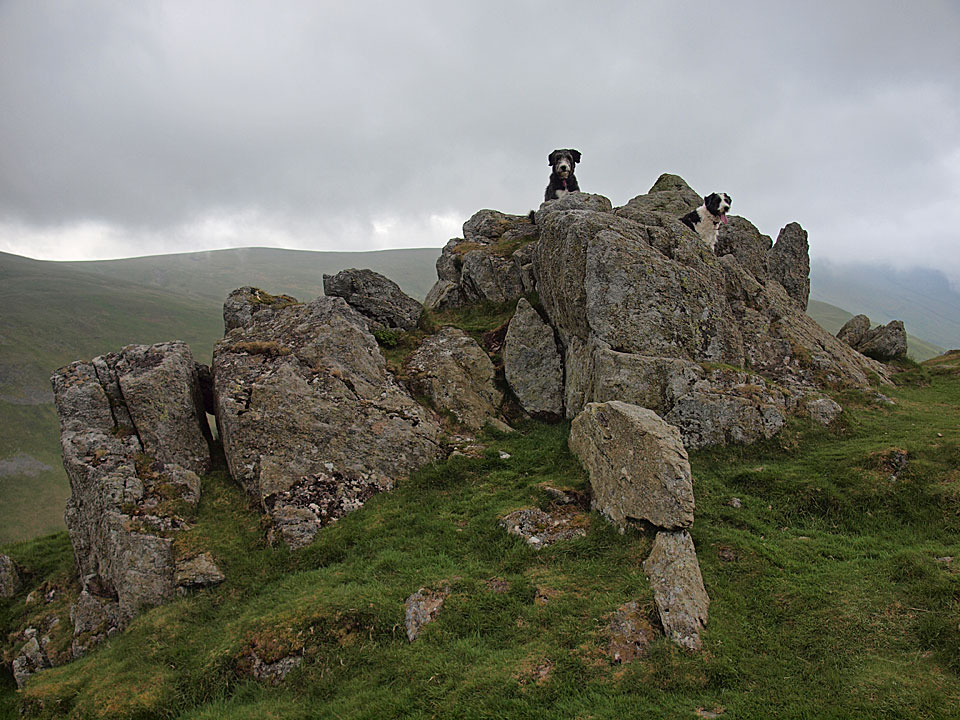 It started off fairly bright this morning but that soon changed once I was up onto Steel Knotts. Looking up to the High Street ridge, the clouds came down on it and I thought I was in for a day in the clag – fortunately it lifted before I got there but the breeze made it surprisingly cold today.

A little bit of early morning sunshine on the climb to Hallin Fell.

The Nab and Beda Fell again from higher up the climb.

Steel Knotts ahead, St Peter's Church can be seen in the trees in the centre.

Looking the other way across St Peter's Church to Hallin Fell beyond.

The weather gradually closed in on the climb of Steel Knotts. Dougal and Casper are hiding on the rock tor that is the summit of Steel Knotts, Pikeawassa.

Dougal does that sheepdog thang when they spot a sheep.

Looking back to Steel Knotts from Brownthwaite Crag.

The ruin at the head of Fusedale before the climb to the High Street ridge and Wether Hill. It was so cold now I had to put a jacket on along with hat and gloves, not great for May.

The summit of Wether Hill, at least the cloud has cleared now.

The grassy expanse leading to Loadpot Hill, on the left is a herd of wild fell ponies.

First we are heading for Arthur's Pike, which is on the right before cutting back to Bonscale Pike on the left in this photo.

Dougal's ear gives away the stiff breeze up here today.

Dougal checks out the twin towers on Bonscale Pike.

Hallin Fell and beyond.

Fusedale and Steel Knotts from the steep descent.

Weather: Overcast with some drizzle. 19ºC.

It has been a long time since I was over this way – in fact it seems like a long time since I have been over any way! However, needs must and I was glad to get out today even though I would have preferred the sunshine of yesterday. Normally I find this sort of terrain easy going and I thought I managed to do the walk surprisingly quickly as I felt a little unfit and was puffing and panting a bit on the climb up to Wether Hill. I must get out more to keep my fitness levels up…

Today’s walk was a round of remote Fusedale on the eastern side of Ullswater. It was a steep pull onto the High Street ridge from Steel Knotts, but once on the top, the going is easy and I followed the old Roman Road for part of the route. Although it was warm today, it remained overcast virtually throughout with the odd sunny moment and a heavy shower towards the end.

The large obelisk on Hallin Fell, looking along Ullswater.

Looking back to Steel Knotts from Brownthwaite Crag, Fusedale is to the right.

A launch on Ullswater from Bonscale Pike.

The head of Ullswater from Bonscale Pike.

Hallin Fell, the first fell of the round, from Swarth Fell.