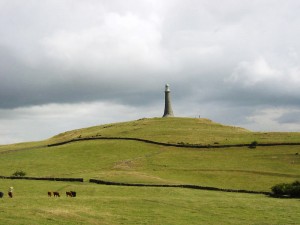 We had a short walk up to Hoad Hill today, a small hill (133m) which stands over the small market town of Ulverston, just outside the southern fringe of the Lake District National Park. Atop the hill is a monument which is a local landmark, The Hoad, officially named The Sir John Barrow Monument. It celebrates the famous Ulverston son who was a Naval administrator and traveller and is built in the style of The Eddystone Lighthouse.