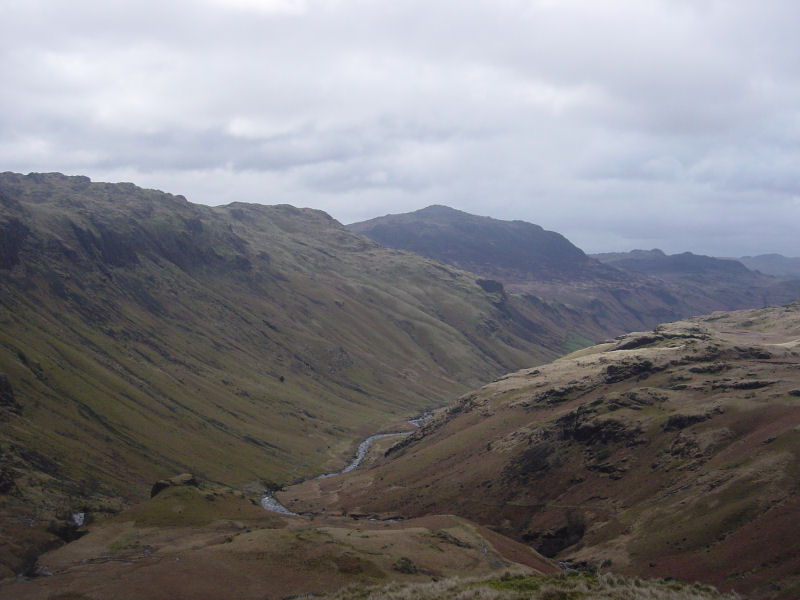 Looking along Eskdale to Harter Fell from Throstlehow Crag

Today’s walk is a round of Upper Eskdale, one of the wildest and best valleys in the Lake District. At the head of Eskdale lie the ‘heads of state’ of English mountains, namely Scafell Pike, Sca Fell, Esk Pike and Bow Fell and this area offers some of the finest views anywhere.

Once again, it seems winter has returned with snow showers present throughout the walk and fresh snow on top of the high fells.

Approaching Hard Knott. The many electric fences in this area (one can be seen to the right) certainly made Angus squeak when he 'got it wrong'.

Harter Fell through a snow storm from the summit of Hard Knott.

The Eskdale Needle from the south.

It was very windy on the summit of Yew Bank!

Across Lingcove Beck - the wall runs up to Throstlehow Crag, the next port of call with Scar Lathing the crag to the right. In the background are the Sca Fells complete with fresh snow.

Looking along Eskdale to Harter Fell from Throstlehow Crag. Can you spot the Eskdale Needle?

The view across Great Moss from Scar Lathing.

Slight Side from High Scarth.

Slight Side and High Scarth from Silverybield.

The impressive Yew Crags on the east face of Border End.

Mediobogdum - Hardknott Roman Fort. The fort walls are to the left and to the right is the parade ground.