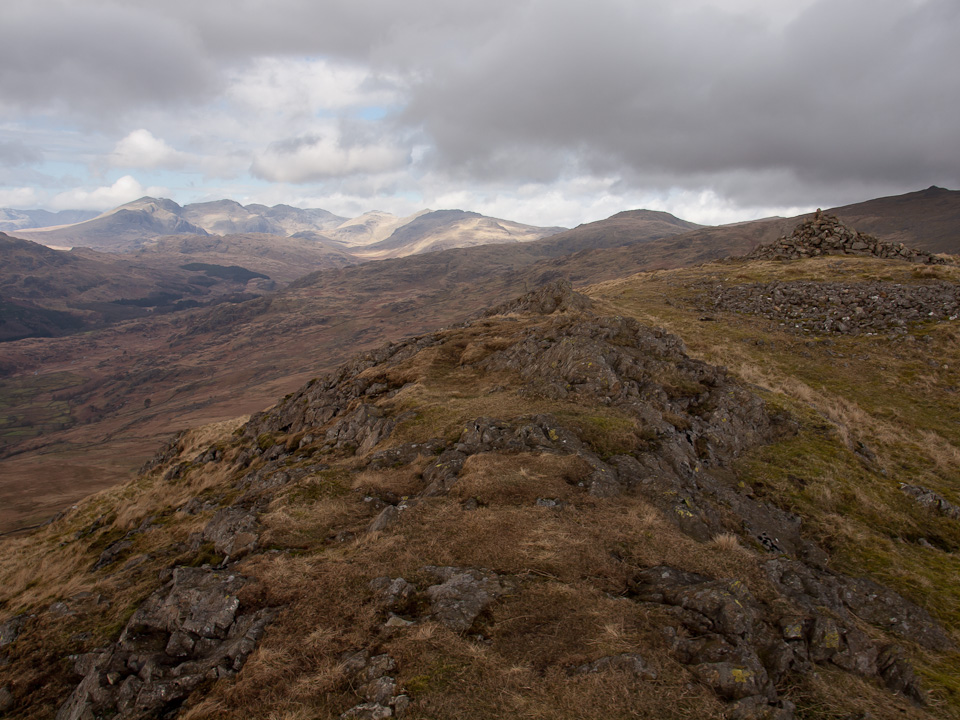 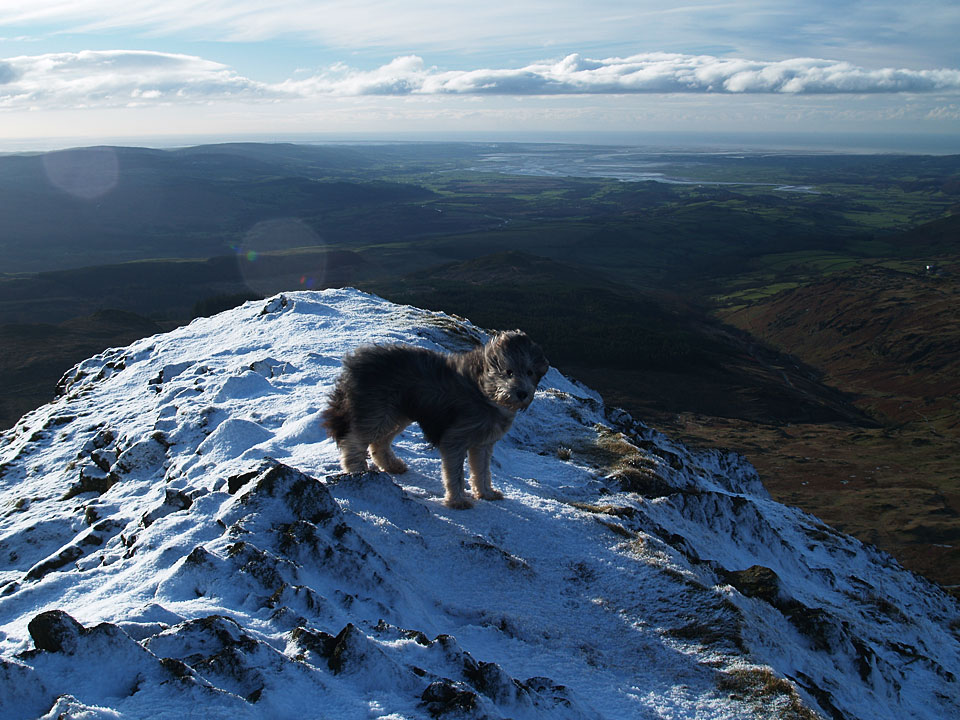 Angus on White Pike, the Duddon Estuary beyond

The weather was supposed to clear later in the day, unfortunately that never materialised but I was enjoying the fresh air so much I extended a planed shorter walk to Caw by linking it to the Coniston fells. It was an unusual route but it was worth it to see if it could be done (the answer is yes, but recommended? Probably not!).

Seathwaite and Wallowbarrow Crag from the Park Head Road.

Climbing the track, Fox Haw ahead.

Looking back along the Duddon Valley, Bowfell at its head. Shortly after this the path doubles back on itself to climb Caw.

Climbing through the old quarry workings.

Dougal decides the route for the rest of the day.

The next stop was Pikes, a conspicuous peak between Caw and White Pike, here looking back towards Caw from the summit.

I've never linked Caw with the Coniston fells, so why not? I went for the mine workings central in this photo - it was a bit boggy to say the least!

Harter Fell and the Scafells from the quarries on the slopes of White Pike.

A steep climb brought me to the top of White Pike.

A reverse view of one of the photos from above, looking back to Caw.

The route walked from Walna Scar. From here, I descended the Walna Scar road back to the old workings and back the boggy way I came to descend back into Seathwaite.

The snow seems to have disappeared from all the south western fells now. Today was a real mixed bag of weather but an enjoyable climb up through the Walna Scar Quarries up to White Pike and White Maiden. It seems like ages since I have been this way so it was a welcome (if a bit fresh) return.

There's a touch of blue sky up there, looking up to White Pike from the bottom of the Walna Scar Road.

Harter Fell across Long House Gill and it's looking a bit grey over there.

The view from higher up the track with a glimpse of Scafell to the right.

White Pike and the disused tips from the Walna Scar Quarry.

Light and dark, looking across to Black Scar.

The gentler south western side of Dow Crag. You would never guess what the eastern face of it was like from here.

The Scafells are missing in action over there somewhere.

From the quarry it is a steep and direct climb to White Pike. The wind really picked up climbing up here (as Casper and Dougal demonstrate) and with it came the rain.

...but the strong wind blew the clouds right away by the time I reached the summit cairn of White Pike and the Scafells are magically revealed once more.

Looking along Broughton Moor to the Duddon Estuary, Black Combe to the right.

Broughton Moor Slate Quarry below, beyond is Beacon Fell and Beacon Tarn with a glimpse of Coniston Water.

The Coniston fells from White Pike.

Scafell and Scafell Pike with the ridge of Hard Knott central.

A lovely view of the Scafells now across one of the un-named tarns on White Maiden.

The summit of White Maiden.

It's like a different day altogether walking the White Maiden ridge.

Heading for the small lump of Walna Scar looking to Dow Crag, Buck Pike and Brown Pike. On the distant right is The Old Man.

The top of Walna Scar and as if by magic the weather completely changed again as it went very grey...time for a quick exit.

Back down to the bottom of the Duddon side of the Walna Scar Road, this is Long House Gill from the small bridge.

It was sunny, snowy and cold up on the Coniston fells this morning and it was nice to get above the snow line and tread the crisp, new snow in sunshine for a while. The wind was constantly blowing in snow showers up on the Dow Crag ridge and it looks like there is more to come. I had intended to walk round to Grey Friar and descend that way but the ominous clouds and heavy snow showers put paid to that idea!

Above the snow line and above the ruins of Walna Scar Quarries looking to Harter Fell, the Scafell range covered by cloud. The wind was really strong and very cold from here - an icy blast.

A contrast in colours on the aptly named White Pike looking across to Caw with Black Combe beyond. I think Angus and Casper are trying to shelter from the oh-so cold wind!

Angus on White Pike, the Duddon Estuary beyond.

Next stop White Maiden, the summit is at the top of the wall.

Angus has beaten me there.

Casper on the sunny but cold White Maiden, Coniston Water behind.

On the summit of White Maiden. Angus is trying to remove the snow that has balled under his paws, an occupational hazard for a fell walking dog.

Angus caught in a windy snow shower on Walna Scar.

Looking back from Walna Scar to White Maiden and White Pike.

The view from Brown Pike looking back to Walna Scar, White Maiden and White Pike with a non-showy Caw and Black Combe beyond.

Heading for Buck Pike with The Old Man of Coniston to the right.

Blind Tarn and Brown Pike with Coniston Water and the Leven Estuary dazzling in the sunshine.

Casper with snowy chops! For some reason he likes to eat snow and doesn't get bothered with snow balling under his paws like Angus!

The route from Buck Pike to Dow Crag.

The frozen summit of Dow Crag.

Coniston Old Man with a snow shower blowing in.

Swirl How under cloud cover, Levers Hawse and Brim Fell on the descent to Goat's Hawse.

A frozen Far Gill on the descent to Seathwaite Tarn.

Seathwaite Tarn from the dam wall.

The sun was shining again today, with temperatures up to a pleasant 17°C at valley level, although at times it was quite chilly in the cold breeze on the tops. I had a walk up to the Coniston fells from Torver, using the gradual ascent up to Walna Scar via the ‘ignored by Wainwright’ south western fells. The view becomes increasingly better using this route with unrivalled views of the southern Coniston fells and great views along the Duddon Valley to Harter Fell and the Sca Fells beyond.

Brown Pike, Buck Pike, Dow Crag and The Old Man of Coniston from the Torver path.

Caw with Stickle Pike behind from White Pike. In the distance is Black Combe.

Harter Fell from the approach to Walna Scar. In the distance, behind Scafell on the right, is Pillar, the depression of Wind Gap, Scoat Fell and Haycock.

There was a stiff breeze on Walna Scar!

The path to Dow Crag.

The view towards the Sca Fells from Dow Crag.

Looking back along the ridge from Dow Crag, the Duddon Estuary in the distance.

The rocky face of Dow Crag from Goat's Hawse.

Bluebells in the woods near Torver.

Today’s walk takes in a circuit of Torver High Common and is truncated from what I originally planned due to the rather inclement weather. As it rained from start to finish, there are no promised great views of the Coniston Fells or the Sca Fells, but there are some nice water shots – seeing as there was so much of it around!

The shapely peak of High Pike Haw. In the foreground is an ancient cairn on Bleaberry Haws which is marked on the map. It consists of a circular hollow approximately 1.5 metres in diameter and 0.5 metres deep, surrounded by stones. This area yields much evidence of a Bronze Age settlement.

The force of Torver Beck under Cove Bridge...

...and the thunder of the waterfall further downstream.

The damp sign at Torver...it just about sums up the day!