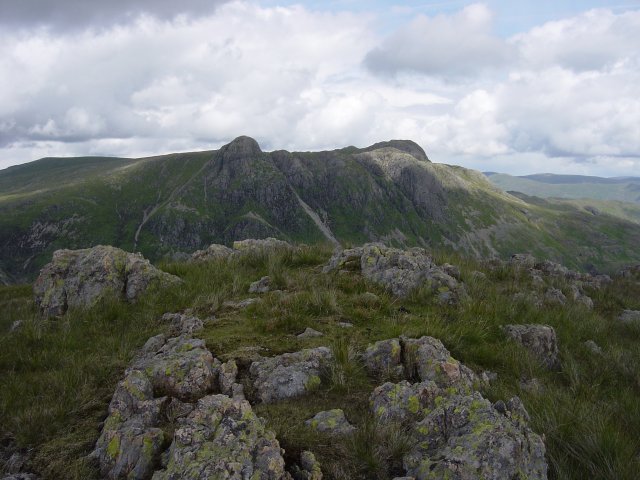 White Stones on The Band

Today’s round is a high ridge round with great views of the Langdale Pikes and the Scafell range. Today started off sunny, but the clouds on the tops looked ominous.

Up the tarmac from The Old Dungeon Ghyll car park, past Wall End and then a right turn onto the fell side for the ascent of Pike O' Blisco. This view of Mickleden over Wall End is from the road.

The rain set in as I reached the top. Here Windermere can be seen from Pike O' Blisco summit.

Red Tarn from the descent of Pike O' Blisco. The route I took was around the far left of the tarn from this view and then straight up the side of Cold Fell following the (electric) fence all the way to the summit.

Pike O' Blisco from the summit of Cold Pike. Then it's an easy descent to the main path going to Crinkle Crags and striking northwards from the path I headed for Great Knott summit.

The second Crinkle, Mickle Door and the third Crinkle across Great Cove. There are five Crinkles in all, each is a separate summit. The highest summit is the second Crinkle, named Long Top. The Crinkle Crags can be a very confusing place in mist as the path does not follow a direct line. At the start of the second Crinkles ascent, there is a vertical rock face approximately 3 metres high known as 'the bad step'. This requires either climbing the rock or circumventing the step by following the path to the left flank of the buttress.

The first Crinkle, left looking to the Scafells..

and the Third Crinkle looking over Mickleden.

The Langdale Pikes from the fourth Crinkle, left and the Coniston fells from the fifth Crinkle, named Gunson Knott. When walking the ridge it appears there are more than five Crinkles, indeed there seems to be seven. The first top after the Crinkles is named Shelter Crags and there is a further un-named peak just before the descent to Three Tarns.

Bowfell from the summit of Shelter Crags. As the cloud was clearing, I decided to press on to Bowfell.

Bowfell looms over Three Tarns. The steep path can clearly be seen rising up to the summit.

It was well worth climbing Bowfell for the spectacular views. Here Lingcove Beck, Hard Knott, Harter Fell and Black Combe can be seen from the summit.

A distant Grasmoor, Eel Crag, Sail and Grisedale Pike over Brandreth and Allen Crags from Bowfell.

Pillar from Bowfell. From here I took a different line of descent from the route of ascent. Following the path known as the climbers traverse from the summit alongside the Great Slab, a gigantic slab of steeply angled rock

The Great Slab of Flat Crags

The Langdale Pikes from the summit of White Stones on The Band. Picking up The Band again, it was a simple descent to Stool End and The Old Dungeon Ghyll car park.