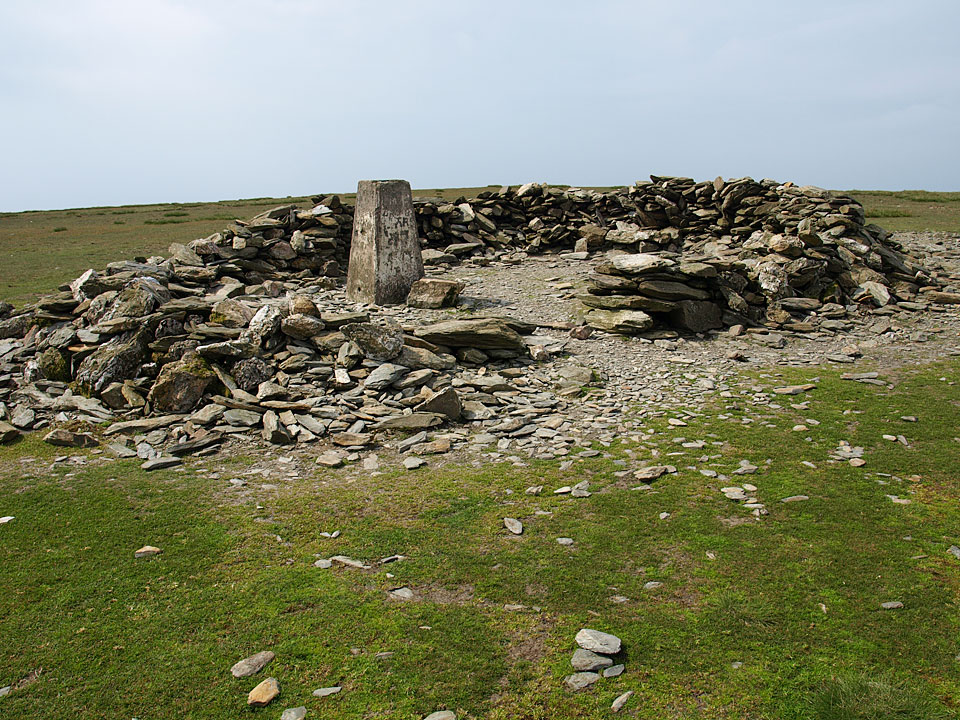 The shelter and trig column at the summit 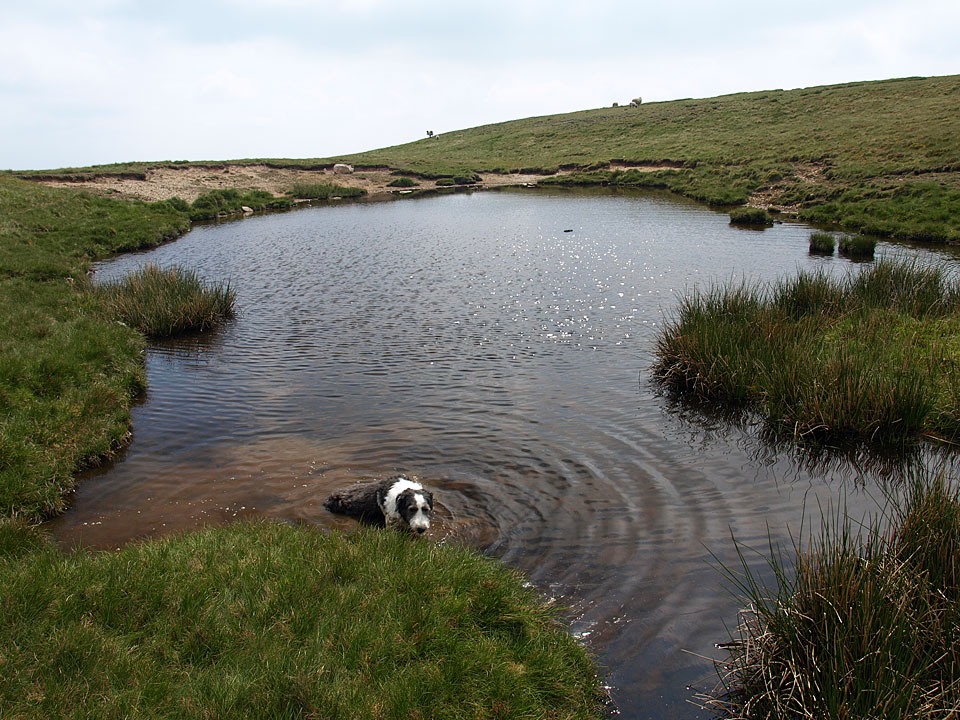 It feels like ages since I have been to Black Combe and even longer since I ascended from Whicham Church, the quickest and easiest way to get to the top. The weather wasn’t good for distant views as it was very hazy and the predicted rain came as I set off home in the car.

Looking across to Kirksanton and Silecroft Wind Farm. Some people complain about windmills spoiling the view but at Kirksanton there is an application to build a new nuclear power station right by that wind farm. I know which I would prefer.

Foxgloves at the foot of Black Combe.

'Which other fell can be ascended in carpet slippers?' said Wainwright about the climb to Black Combe along this path from Whicham.

Looking back from further up the path. There are virtually no distant views today as it is so hazy but the Furness Peninsular can be made out on the horizon.

Black Combe summit ahead. What's Casper up to?

Having a roll in the grass of course!

The summit of Black Combe.

Casper in the shelter.

My, what a long tongue you have little Beardie boy.

The South Top of Black Combe.

Looking back over the tarn to the summit from the South Top of Black Combe.

The large cairn on the South Top with the Duddon Estuary beyond.

Descending to the Whicham Valley. The main path drops down in the middle of these two rises but I detoured off to the right which is Seaness. Is that Sea as in the water beyond the coast or does it have the same name as me?!

The Cumbrian coast from Seaness, Walney Island beyond.

More cloud but no rain at least for our walk this morning up to Black Combe, that great hulk of fell at the south-western tip of the Lake District. It is a relatively easy ascent following Whitecombe Beck all the way to Whitecombe Head, the sting in the tail being the very steep descent to get back to the valley.

Looking across to Black Combe from the climb across the lower slopes of White Combe.

The same view from higher up, the clouds are down on the summit of Black Combe up to the right.

Looking along the valley to Barrow-in-Furness and Walney Island across the Duddon Estuary beyond Millom.

Angus and Casper on the misty summit of Black Combe.

A close-up of Barrow and Walney Island with Haverigg in the foreground.

White Combe from Black Combe. The path used in ascent can be seen zig-zagging to the left.

White Hall Knott from the descent.

Another day with non-existent views; the whole of the Lake District seemed to be enveloped in low lying cloud today with the promise of further (summer!) weather like this for a few days yet. I had a walk up to Black Combe, a relatively easy walk, and a nice one whatever the weather – at least the rain held off!

The way ahead following Whitecombe Beck. It is interesting to compare the predominately green colour of today's photos with those from last time here on 20th January

Yes Casper, all the way up there.

White Hall Knott from the climb to Black Combe alongside Blackcombe Beck.

Heading into the cloud.

Still need a drink though...

...from this boggy tarn!

A misty Black Combe summit - I found an England flag on the way up, so it now resides on the top of the trig. column!

Out of the mist briefly, approaching White Hall Knott.

Looking along the Whicham Valley from White Hall Knott.

The path used to ascend Black Combe is the main track from the left up to the groove of Blackcombe Beck and then the faint path through the bracken to the right of the beck.

Black Combe from the bottom, the top half still in cloud.

The ends of the horseshoe, Black Combe left and White Hall Knott, right.

Black Combe stands isolated at the south-western tip of the Lake District and today it stood isolated as the only cloud-free fell I could see! Well, it did at first, anyway – the mist soon rolled in to cover the very top of Black Combe by the time I arrived. The descent of Black Combe following this route is particularly attractive, following the beck all the way back to the start point.

Catching a brief moment of sunshine on the steep ascent to White Hall Knott.

Black Combe from White Hall Knott, Blackcombe Beck running down the centre. The path to the right of the beck is the path used in descent.

The Duddon Estuary and the Furness peninsula.

Panoramic Black Combe - two Angus' (Angi?!) in this one!

Looking along the valley from Whitecombe Head.

The Irish Sea and the West Cumbrian coastline through the mist from the summit of Black Combe.

Cold and windy by the tarn, it's blowing straight off the sea.

The wind is still blowing across this tarn further down. Behind is Whitecombe Head and beyond is Buck Barrow and Whitfell.

White Hall Knott on the descent.

The accompaniment all the way down was the delightful Blackcombe Beck...

The sun shone more than could have been expected this morning with the thick covering of cloud over the top of Black Combe lifting by the time I reached the summit. Black Combe is described in Wainwright’s Black Combe chapter in his book ‘The Outlying Fells of Lakeland’, page 176.

White Hall Knott with the White Combe ridge running to the left.

The Whicham Valley from the ascent of White Hall Knott.

The cloud hangs on the very top of Black Combe, from White Hall Knott. The route used in descent is the shoulder running from the top left down through the centre.

The Coniston Fells from White Combe. See below for an annotated version of this photo.

Sunrays over the Duddon Estuary.

Looking north to the Scafell range in heavy cloud from Stoupdale Head.

Looking back to Stoupdale Head from the ascent of Black Combe.

View from a sunny South Top of Black Combe, annotation below.

Looking over White Combe to the Coniston Fells.

A walk in the sunshine today around the Cirque of Black Combe, a remote fell in the extreme south west of the Lake District. Its detachment from other fells makes it unique and its unobstructed view allows great views of the high fells and to the Irish Sea.

“the amplest range of unobstructed prospect may be seen that British ground commands” – said William Wordsworth about Black Combe.

As well as taking in the Birkett tops, parts of this walk are described in Wainwright’s Black Combe chapter in his book ‘The Outlying Fells of Lakeland’, page 162.

The walk started at Beckside on the A595 where there are parking spaces by the side of the road. I followed the tarmac for a short way until just before the Fox and Goose cottages, and then a track almost hidden by dense trees and signposted for White Combe lead to the heavily brackened fell side. The track went up the side of the fell, I followed it to the col and then cut back left to the grassy, flat summit of White Hall Knott

Kirkby Moor over the Duddon Estuary from the ascent of White Hall Knott. The water in the foreground is Baystone Bank Reservoir.

Bowfell, The Crinkle Crags and the Coniston Fells from the summit of White Hall Knott.

Black Combe from the summit of White Combe. From White Combe, it was an easy, pathless ascent over lush grassy moor to the summit of Stoupdale Head marked by a small pile of white quartz. The views to the Scafell range from here were stunning.

Zooming in on the Scafells. The Buttermere fells and Great Gable are to the left. From Stoupdale Head, it was back along the path following the rim of firstly Whitecombe and then Blackcombe Screes, up into the cloud at 550 metres and onto the summit of Black Combe.

and the summit tarn. From the summit, it was across the dip which holds the summit tarn and onto the South Top which has a large, round cairn which can be seen from the valley below.

and a view through the mist to the Irish Sea and West Cumbrian coastline. Then it was along the shoulder and head for the Whitecombe Beck valley below. Once below the cloud, the views to the south were fantastic.

Barrow-in-Furness and Walney Island across the Duddon Estuary from the descent of Black Combe. From the steep descent to Whitecombe Beck, it was past Whicham Mill and through Rallis Farm and back to the start point of the walk at Beckside.

Black Combe across the Duddon Estuary.