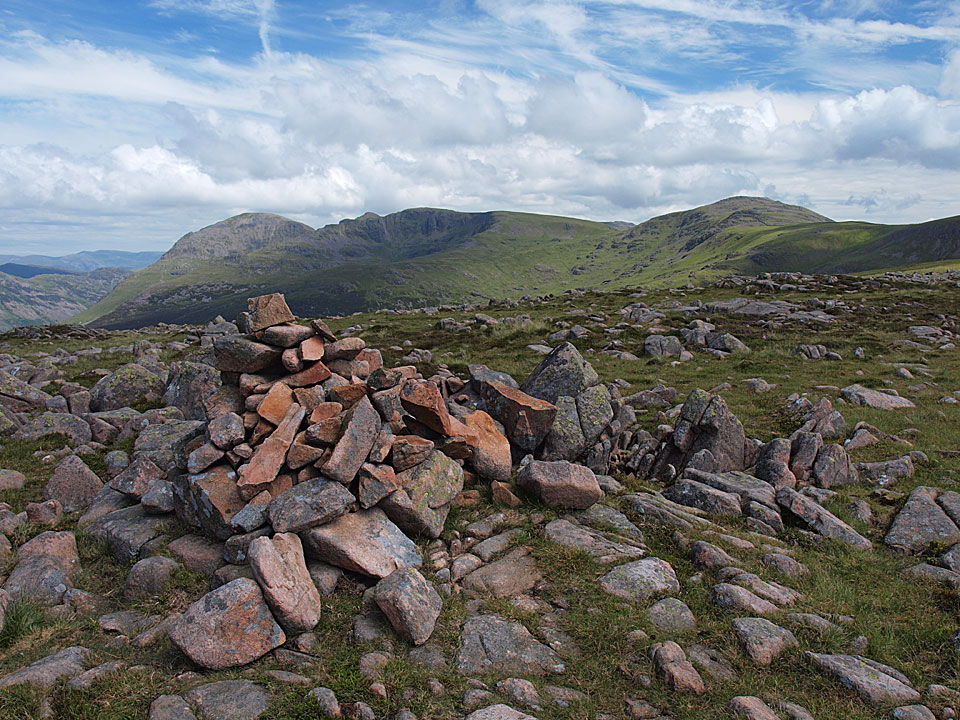 The summit of Ennerdale Fell

It’s a good while since I have done a full day walk and today seemed like a good opportunity to do a circuit of lovely Ennerdale. The weather was superb, a bit fresher than of late and the air was clearer for it. It was a great day out amongst my favourite fells and it was relatively quiet up there too, although it was good to chat to StridingEdge fans on Scoat Fell and then on Steeple.

Pillar silhouetted at the head of the Water.

Looking out from the shadows on the steep climb to Great Borne.

Suddenly, out of the shadows and into the sunlight and heading for the summit of Great Borne.

Ennerdale. The outward leg of today's walk is to the left, the return is to the right.

Starling Dodd and Great Borne from the climb to Red Pike.

The summit of Red Pike.

A panoramic view from Red Pike, Loweswater and Crummock Water in view.

Bleaberry Tarn and beyond on the way to High Stile.

A great panoramic view from High Stile - Red Pike and Dodd to the left, Crummock Water and Grasmoor to the right.

A clear view across to the Scafells, Great Gable and Kirk Fell...and of course the mighty Pillar.

A panoramic across Ennerdale.

Pillar looks so tempting from here.

Grasmoor and the Coledale fells across Buttermere.

High Stile from the summit of High Crag.

A view through to Skiddaw and Blencathra from High Crag.

Instead of descending Gamlin End, I decided to go for a route 1 steeper than steep descent to Ennerdale direct (for masochists only this one, a real leg trembler!). I can see the Memorial Bridge from here (to the left of the tree line) where I want to cross and then the route of ascent is up and above the rocky knoll then to the right following the line of the beck before cutting diagonally left beneath Pillar Rock.

Dougal tries to stop himself sliding all the way down into Ennerdale.

You see yon precipice--it almost looks Like some vast building made of many crags, And in the midst is one particular rock That rises like a column from the vale, Whence by our Shepherds it is call'd, the Pillar. Extract from 'The Brothers', William Wordsworth 1800

Down at the Memorial Bridge.

Crossing the River Liza - Casper is easy to spot but can you see Dougal?

Time for lunch (even though it is only 10.30!) and a seat with a fantastic view of Pillar Rock towering above. Now all I have to do is climb up there. To be continued...after my lunch...

Looking back across to High Crag from the climb to Pillar. The route I used in descent is the diagonal scree run to the right.

Ennerdale and the fells just walked.

Into the lost valley. Pillar Rock naturally dominates the scene on this section of the walk.

Rounding the base of it to join the High Level Traverse.

Phew, made it! Dougal gets an eye opener when he spots the Shamrock Traverse.

Pisgah and the east face of High Man. No Slab and Notch route for me today!

It all looks so reachable from the Shamrock Traverse but there is a climb needed from any angle.

Climbing higher with a view over Pillar Rock to High Stile and High Crag and the fells beyond.

The summit of Pillar.

Time for a second lunch stop on Pillar with a view to Great Gable, the Scafells and Wasdale Head.

Looking back to Pillar from Black Crag.

The east face of Steeple from Black Crag.

Red Pike - the Wasdale one.

Scoat Fell summit and a couple of StridingEdge fans ahead.

The route to airy Steeple and Dougal and Casper have spotted yet another StridingEdge fan to greet us.

Pillar and Great Gable from Steeple.

Looking back on the descent of Scoat Fell - it looks like there is a party on Steeple to the left now.

Steeple and Scoat Fell from the summit of Haycock.

Dougal checks out the route over Little Gowder Crag to Caw Fell.

Haycock from Caw Fell where we met some Beardie fans!

The descent of Caw Fell following the wall to Iron Crag on Ennerdale Fell.

The summit of Ennerdale Fell - Pillar, Steeple, Scoat Fell and Haycock in view.

The long walk in following the Ennerdale Fence.

An Ennerdale panoramic from Crag Fell.

The field back to the car park was full of cows so I didn't fancy crossing that with the two cow magnets in tow, so was forced to take a detour back down to the lake and passed this summer meadow on the way.

Weather: Mainly sunny with lots of snow (!) showers. 7-11°C, valley level – much colder on the tops.

Today’s walk is a long, high level circuit of the beautiful Ennerdale Valley with virtually the whole route being completed at an elevation in excess of 500m. I have had this one on my list of ‘to do’ walks for a while so it was satisfying to complete the walk on a mainly clear day. The photo’s here actually belie the conditions somewhat as the clouds came in when I was crossing from Haystacks to Pillar and there was an icy blizzard. The snow showers continued to come and go throughout the rest of the walk and conditions remained very cold.

An early morning silhouette of Ennerdale.

The sunlight on Crag Fell.

A good view from Red Pike of the round completed last Thursday.

High Snockrigg and Robinson over Buttermere with Bleaberry Tarn in the foreground.

Looking from High Stile across Bleaberry Tarn and Red Pike to Mellbreak and Crummock Water. Loweswater is visible in the distance.

The sun lights up Pillar Rock across Ennerdale on the north face of Pillar - from High Crag.

High Crag from Haystacks with Ennerdale to the left and the Buttermere Valley to the right.

Green Gable, Great Gable and Kirk Fell at the head of Ennerdale from Haystacks. The clouds were ominously creeping up behind me now and minutes later this view was obliterated by a blizzard.

Thankfully it had cleared up again by the time I reached the High Level Traverse of Pillar. This is a view of Pillar Rock from Pillar.

The east face of Steeple from Black Crag.

Pillar from Steeple. Steeple is a lofty, airy pinnacle and it's shape makes it feel as though you are in mid-air - one of my favourites.

Today’s walk is a circuit Ennerdale with the high point being Haycock. I could see the clouds were at a low level when I set off and was in the clag most of the day (again!), although there was a surprise clearing of the mist on Caw Fell.

Lingmell from Char Dub. The path used in ascent can be seen diagonally right to left on the right of the fell.

The steep ascent to Lingmell.

Into the mist on Lingmell..

and (an omitted Birkett?) Tewit How

The Ennerdale Fence runs right over the summit of Little Gowder Crag.

The west coast of Cumbria appears through the mist on Caw Fell.

To the left - clear, to the right - mist! Ennerdale Fell is at the top of the wall in the distance with Whoap to the left.

omeone doesn't want anyone to get to the summit cairn of Ennerdale Fell with a high wall and barbed wire everywhere.

An Autumnal Great Borne and Starling Dodd from the descent of Ennerdale Fell.