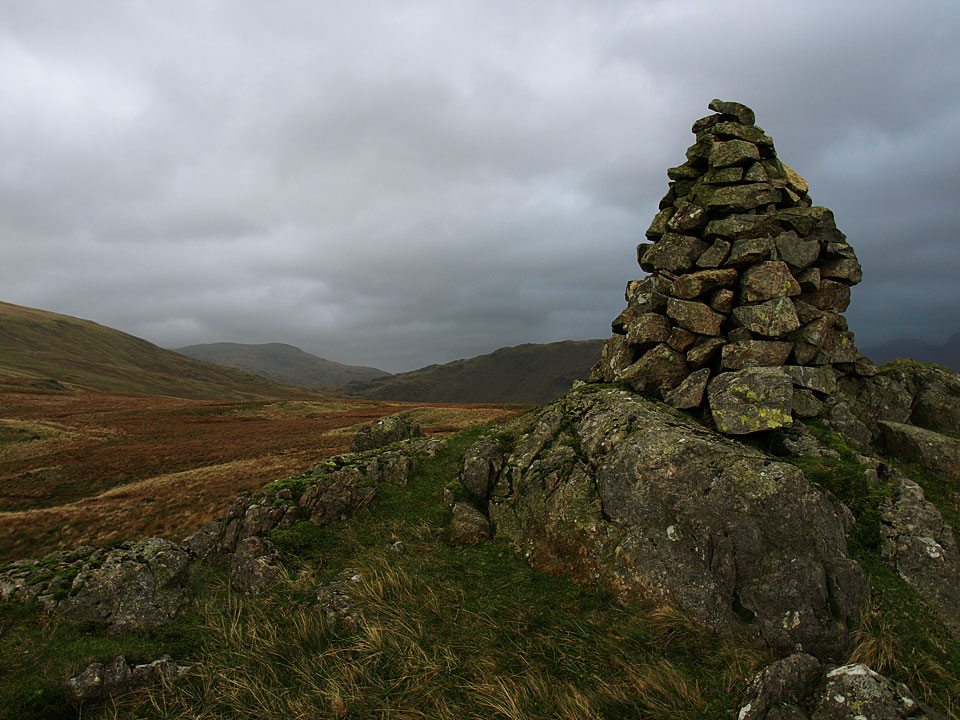 Red Pike from the summit of Glade How

I knew this would be a long one today so hopefully I would time it right to use the daylight to best advantage. The going over Stockdale Moor is a bit of a trudge to say the least and it seems to go on forever – the highlight was coming over Seatallan to the sunset, it was just fantastic. This route will feature in a future edition of Trail magazine. 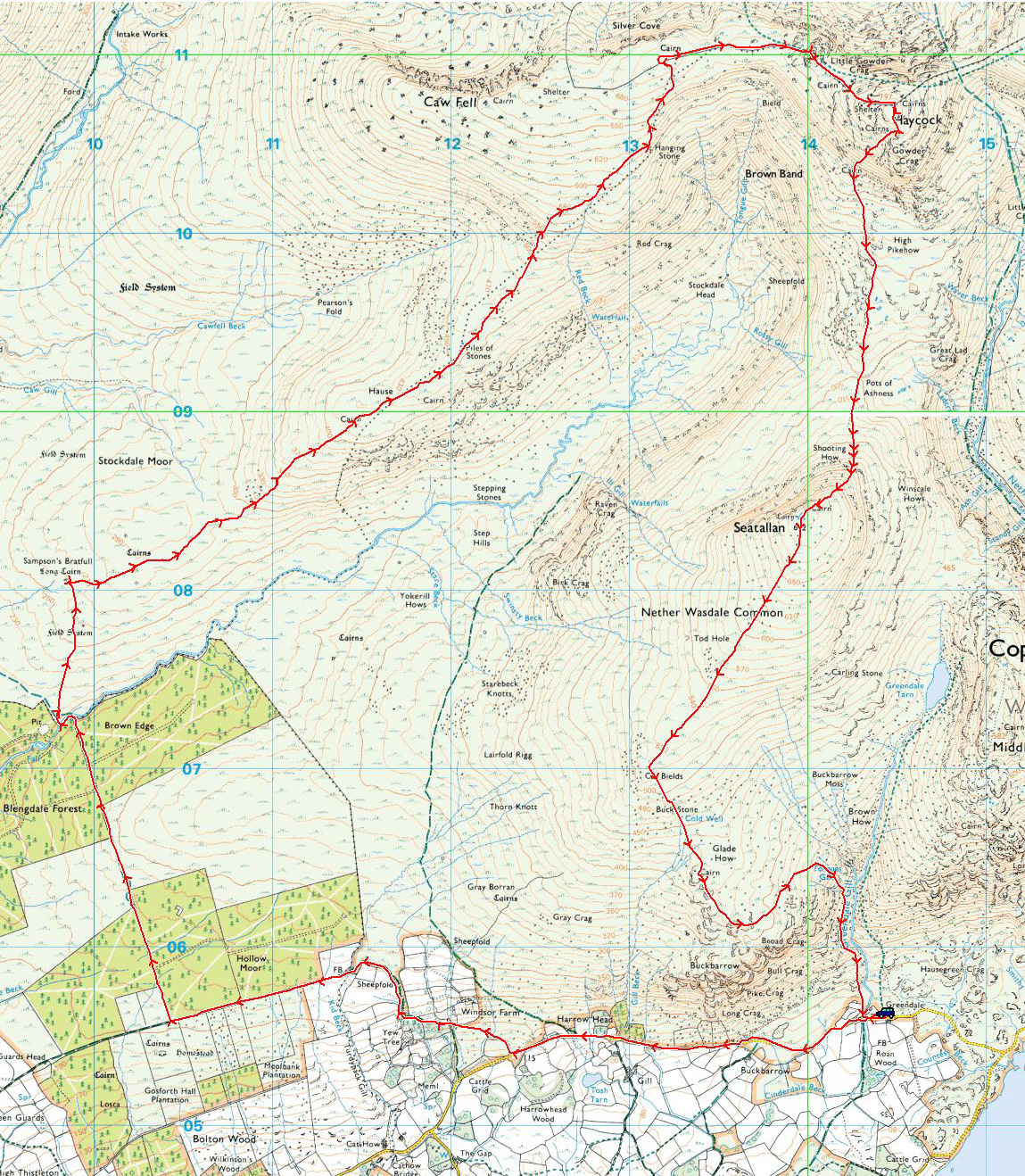 A bit overcast but still gorgeous in Wasdale

There was an interesting crossing of the River Bleng as the stepping stones at Sergeant Ford are long gone and it appears there is no way across without getting your feet wet. I used the downstream side of the water gate downstream of this crossing, it worked a treat.

Blengdale with Haycock's top in cloud and Seatallan to the right

Sampson's Bratfull gains an addition. Stones dropped from the apron of a giant as he strode across the moor so legend has it - I bet he got his feet wet!

There are lots of antiquities and old cairns on Stockdale Moor. It is tough going along here with the tussocky and boggy grass, it gave the curse-o-meter an airing anyway - did you hear me?

The Scafells finally out of the cloud

Caw Fell. It certainly looks a lot brighter to the north, looking across to the High Stile ridge.

Hair raising for the boy

My best pal waiting patiently, taking it all in

Caw Fell and Little Gowder Crag from the climb to Haycock

Steeple and Scoat Fell from Haycock

Haycock from Pots of Ashness

...and from the climb to Seatallan

Yewbarrow lit up by the sunshine. Such are the short days at this time of year I could feel the sun setting as I climbed Seatallan as the skies were reddening, the shadows growing longer and the temperature noticeably dropping.

Great Gable and the Scafells lit by the setting sun

Close up on the Scafells

What a handsome chappie

You may well gaze in wonderment Dougal my lad!

Cat Bields - as the sun went behind the cloud it was like the lights had been dimmed considerably, so it was a case of getting down before darkness finally fell

It was a fantastic return to summer weather today with sunshine, blue skies and with the added bonus of being unexpectedly warm. Today I joined up with Skip, Smoky and fell running legend Joss Naylor for a memorable walk around Greendale.

Today was the day of the StridingEdge.net summer 2010 walk around Greendale. I chose a date earlier than usual to try and capture some ‘guaranteed’ decent weather for it, however that didn’t quite materialise! That aside, it was an enjoyable walk with great company and it was good to be able to chat to followers of the site. Up on Buckbarrow, the icing on the cake was bumping into the legendary Joss Naylor who was taking his dogs for a stroll!

Buckbarrow from the start of the climb to Middle Fell.

Onward and upward for the group.

The summit of Middle Fell.

The massed ranks of the StridingEdge walking party on Middle Fell. There are at least one and a half dogs missing in this photo!

The weather rapidly closed in whilst we were on Middle Fell with Seatallan up to the left now covered by cloud. Here, Casper leads the way.

...a suitable place for a lunch stop.

After lunch, it was onwards once more to Seatallan.

Yewbarrow and The Scafells from the climb.

No, it's definitely not that way.

The only glimpse of Great Gable and Kirk Fell today.

It is a steep climb to Seatallan.

Haycock and Scoat Fell from the northern end of Seatallan.

Casper and Dougal have a rest. Who are all those people? wonders Dougal.

The Scafells were in and out of the clouds.

Heading to the cairn on Cat Bields from Seatallan.

Cat Bields. It was around this time we had a shower and heard the thunder rumbling. Later it was reported that four walkers had been struck by lightning further north in Buttermere and in Borrowdale.

Sunshine on Glade How looking back to Cat Bields.

On the summit of Buckbarrow we bumped into the legendary fell runner Joss Naylor who stopped for a chat. I asked him about the nearby cairn that has become known as the 'Joss Naylor Cairn' and he told me that it was on the site of an ancient cairn and there was reputedly a body beneath!

Portrait of a legend.

Looking the other way to Wast Water.

Heading back to Greendale.

Wast Water and The Screes.

A panoramic view of Wast Water and the Screes.

Greendale Gill. The path used to climb Middle Fell earlier is clear to see from here.

Greendale Gill from further down.

Today I had a short walk up to Buckbarrow from Greendale. It was quite warm and there was the occasional but brief sunny spell. The wind was really strong on the top and I could hardly hold the camera steady at times. Before the walk I got talking to Jos Naylor, the fell running legend (the ‘King of the Fells’) who lives in these parts. He has a working dog that is part Beardie, showing the widespread use of the breed in the Lake District as sheepdogs. It was fantastic to meet the great man so it was only fitting that I should visit his cairn today too. I think old Jos had his eye on Casper to use as a working dog on the fells…

The great view from the road into Wasdale. Buckbarrow, today's walk, is on the left.

Sunburst over The screes from Greendale.

Casper fancies a walk with Jos Naylor and his dogs!

Yes, up there Casper!

Looking back from the climb alongside Greendale Gill.

Plenty of water in Greendale Gill after the rain of the weekend.

Casper with blurry tongue, he can't keep that still.

Seatallan beyond the Jos Naylor cairn.

The view to Middle Fell from above the cairn.

A bad hair day for Casper as the wind really gets up. It was wild on the top today.

Red Pike from the cairn on Glade How.

Casper faces the wind as we head to the summit of Buckbarrow.

Just as I wash sheltering beneath the cairn on Buckbarrow, I looked up and there was blue sky and the moon directly above the cairn.

It is looking autumnal to the west from the steep descent from Buckbarrow.

The road back to Greendale.

Today’s walk is to some of the unfashionable fells overlooking Wast Water; Buckbarrow, Seatallan and Middle Fell. When I completed this round last year, it was teeming with rain and I really wanted to do theses fells in nice, clear weather. However….

I parked at Greendale by the side of the road and followed the tarmac west to Harrow Head. The path to Buckbarrow isn’t obvious from the road; it is a grassy track between the wall and Gill Beck immediately before the road triangle at Harrow Head. If you walk slightly past Harrow Head and look over the wall, you will see the hidden Tosh Tarn.

Gill Beck waterfall on the ascent to Buckbarrow.

Tosh Tarn from further up the path. At the top of the path, the crags to the right of the summit are worth climbing for the view of Wast Water - if it is clear! From this point, the summit is across the dip on a rocky knoll.

Wast Water through the mist from Buckbarrow. From Buckbarrow, head north for Glade How where there is a prominent cairn. From Glade How, the next target is Cat Bields which lies to the north west and here lies another cairn which marks the ascent of Seatallan.

Cairn on Glade How..

Seatallan summit - no views today then! The large pile of stones is an ancient burial mound, reputed to be 1000 years old. From Seatallan, I headed east to the hause marked on the map at 465 metres. From here I made a slight detour south to Greendale Tarn, back to the hause for the easy ascent to the summit of Middle Fell.

Greendale Tarn. Beware of the bogs on Middle Fell - I fell in up to my waist on here!

and Wast Water appears through the mist on the descent, right. A long descent from Middle Fell, the path meets up with the one from Greendale Tarn and from here it's a direct descent southwards to Greendale.

Buckbarrow from the descent of Middle Fell.

Cascades, Tongues Gills from the descent of Middle Fell.