Wow, how long has it been since I was up some of these fells? Well the last time I was on Gray Crags was in 2009, I can hardly believe it!. When I set off, the eastern fells were overcast with cloud and looking to the west I could see those fells were bathed in sunshine. Not to worry, it soon cleared out to make it a fantastic day, the longest I have done for ages and probably the longest ever for Fletcher, taking in 7 new Wainwright summits for him. I won’t leave it so long next time.

The Helvellyn ridge catches the first light. Taken from the steep, steep climb to Gray Crag we are still in the shade.

Looking down on Hayeswater - since I was last here (admittedly it is quite a while!) it has lost the dam on its western edge.

Gray Crag summit - the Wainwright one. According to the map the second cairn along to the south-east is the highest point.

Looking back along the Gray Crag ridge on the traverse to Thornthwaite Crag. At least there is the odd glimmer of sunshine but out to the west definitely seemed to be the place to be early on.

A closer view of Windermere.

Looking across Threshthwaite Mouth from the Beacon.

The Beacon is an unsafe structure.

The way ahead, to High Street.

Looking back to Thornthwaite Crag.

On High Street summit, the weather really did change now with a cold, cold northerly wind blowing. Time to stop and layer up and try to keep warm - come on Fletcher let's keep moving!

A fabulous view to the east looking along Rough Crag with a view of Haweswater.

...and looking down on Blea Water.

Fletcher looks like he is wondering which way to go.

Heading for Kidsty Pike. On Kidsty Pike we bumped into the first person seen today, good to have a chat with Stuart up there as it had looked like we wouldn't see anyone all day.

High Street from the lofty perch on Kidsty Pike - a great place to shelter from the wind for a while and have a coffee break.

The eastern fells on the way to High Raise.

A beautiful panorama from Rampsgill Head.

It looks as though you can just step across to The Knott in this photo; in reality there is a descent then short climb to get there. Looking at the Knott took me back years to when Angus (my old Beardie companion, the King of the Fells) disappeared in mist up there. Oh what fun I had walking up and down shouting him.

The Knott. Another interesting one - when I got there I found a phone case complete with phone and credit cards lying on the floor. What to do - leave it or take it with me? The phone was fully charged so I knew it couldn't have been there too long. I had seen a lady walking towards High Street as I was descending from Rampsgill Head so I thought it must be hers. As luck would have it, a fell runner joined me on the top and we discussed that she would tell the lady if she caught her. The runner left and on the way to High Street I saw someone coming back and it was the owner so I reunited her with her possessions, good deed for the day complete!

On the descent to Hayeswater.

As usual it didn't take long for the temperature to climb during descent which required much layer shedding. Predictably Fletcher was straight in for a drink at Hayeswater.

The Knott and Gray Crag. 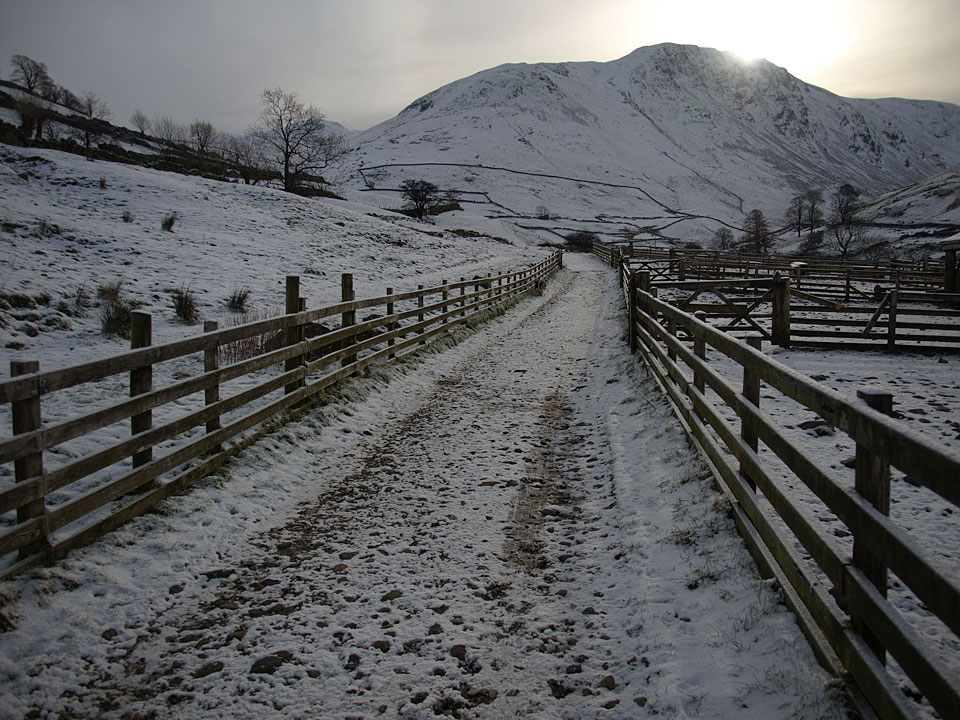 Sun rising over Gray Crag from the corrals at Hartsop 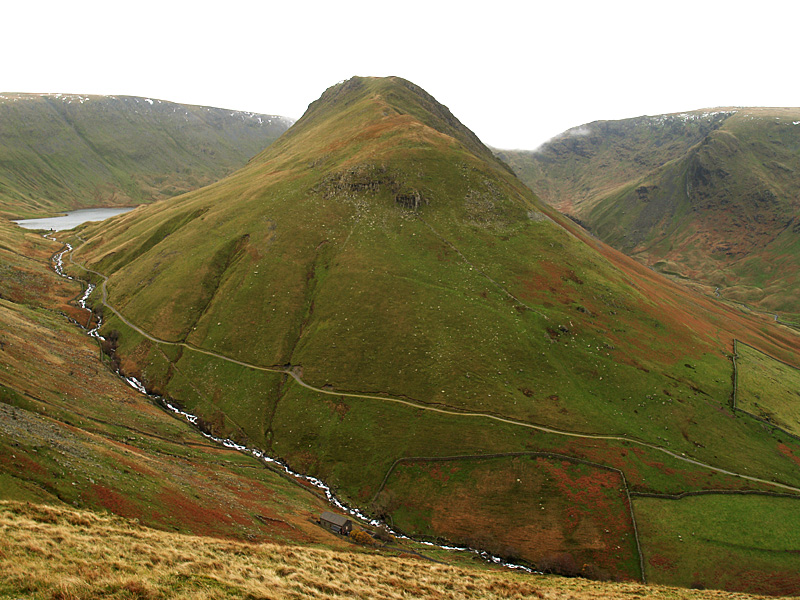 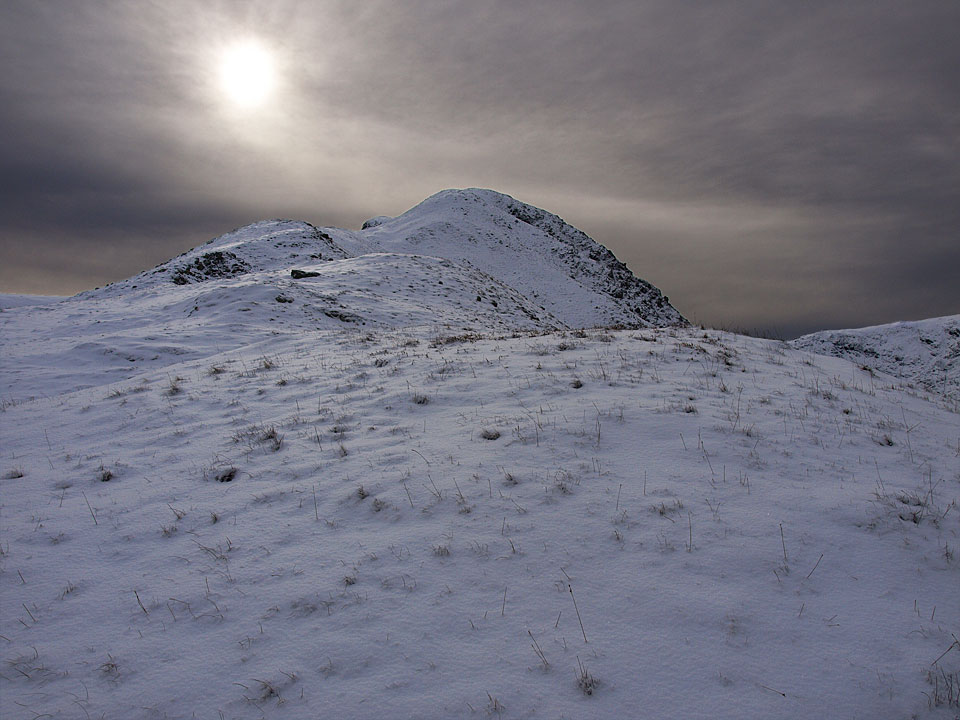 Strange light over Gray Crag from the start of the plateau

I managed to get over Kirkstone Pass this morning even though it was pretty icy again. This is the fourth walk in a row in the same area, I guess I am just drawn over that way at the moment for some reason. The weather prediction was for great clarity today and it was indeed clear all morning, but the sun did not quite manage to get through the cloud although there were some quite amazing skies over the snowy fells.

Sun rising over Gray Crag from the corrals at Hartsop.

Looking back to Hartsop from the path to Hayeswater, St Sunday Crag beyond the Hartsop above How ridge.

Hayeswater Gill and the climb up to Gray Crag in view.

Hartsop from the first wall on the steep climb to Gray Crag.

Despite not being sunny there was great clarity today, looking across to Helvellyn with a corner of Brothers Water visible below. Blencathra is visible on the far right.

Strange light over Gray Crag from the start of the plateau as the sun was trying to break through the great sheet of cloud that hung over the fells.

Heading for the summit ridge.

The Knott above Hayeswater, the route of return.

Casper was not keen on the soft new snow today as it kept balling up on his fur, as he demonstrates here with his snowball beard!

Heading for Thornthwaite Crag from Gray Crag. The sky was amazing as the sun continue to try and burn through the cloud. It looked like sunrise even though it was 10.15 when this photo was taken.

The view through Threshthwaite Mouth into Troutbeck.

What a slog it was to get this far in the deep, virgin snow (apart from the fox tracks in this photo that is. These tracks went all the way round to High Street so perhaps Fantastic Mr Fox was doing the same round as me!) but well worth it. It was a great day to be up here.

The Knott and High Street.

The view back along mine and Casper's tracks to Gray Crag.

The sun was starting to shine through now, here looking to the north-west where it is still lovely and clear.

Harter Fell and Kentmere Pike from the wall heading out to High Street.

Ill Bell and Froswick from further along the wall.

The route of return along the High Street ridge.

The Ill Bell ridge and Windermere from High Street Roman Road (well, I think I was on it - I couldn't make out any paths!).

Looking over the eastern side of High Street to Rough Crag and Haweswater.

Heading for the Straits of Riggindale, the weather took a decided turn for the worse with an arctic blast blowing in from the west. Time to put another layer on here for me.

Not as bright now across Hayeswater to the eastern fells.

Looking back to High Street from the Straits of Riggindale.

Viewing the circuit just walked from The Knott.

Casper, weighed down with about 3 tons of snow now.

Rest Dodd and The Nab from The Knott.

A last gasp of sunshine on the descent towards Hayeswater.

Heading back to Hartsop and the snow is blowing in from over St Sunday Crag and was heavy by the time I reached Hartsop.

I didn’t know what to expect today, I certainly didn’t expect any clear photos as it was raining so much! As I went over Kirkstone Pass, there was a certain amount of clarity around Hartsop, so that’s what I settled on. The clouds were hanging around in thick layers in the valleys but eventually it lifted to cover the tops and the highest part of the walk was completed in the mist.

Clouds hanging on the side of Angletarn Pikes.

At the bottom of Hartsop Dodd, the steep ascent is straight up alongside the wall.

Looking over to Saint Sunday Crag across the low lying clouds.

Looking over Brothers Water to Dovedale.

A glimpse of Ullswater through the clouds in Patterdale.

Looks like it is clearing out a bit over Patterdale now.

Brothers Water and Hartsop above How with Saint Sunday Crag beyond.

Angus and Casper on Hartsop Dodd.

Looking back to Hartsop Dodd summit from the ridge walk to Caudale Moor....and that was it! It was up into the clouds onto Caudale Moor, remaining in them descending to Threshthwaite Mouth, up to Gray Crag and along the ridge.

Out of the clouds at last and over the steep descent of Gray Crag.

The top of Hartsop Dodd in cloud now beyond this old barn.

Another walk chosen by my 13 year old son today, principally to take in some wildlife; the promise of wild ponies on Thornthwaite Crag, a Golden Eagle over Riggindale and deer in the Martindale Deer Forest spurring him into action. Of course, there was also the lure of walking in the footsteps of Roman soldiers across High Street.

From the car park through the hamlet of Hartsop, we followed the old mine road along Hayeswater Gill and over Wath Bridge.

Threshwaite Mouth from the Hayeswater Gill path. We decided to ascend Gray Crag by the direct route - straight up the sickeningly steep nose leading directly to the summit.

The Eastern Fells from the summit of Gray Crag, Catstycam is the conical peak on the right. From the summit, it is a simple stroll along the grassy undulations to Thornthwaite Crag, sometimes referred to as Thornthwaite Beacon due to the distinctive 14 feet high column on its summit.

Thornthwaite Beacon. From the beacon the path U-turns on to the Roman road and follows the gentle rise to the summit of High Street.

Yoke, Ill Bell, Froswick and Windermere from the Roman road on High Street. We then left the Roman road to cross the wall which traverses the summit plateau and headed for the trig. column that marks the highest point.

The summit of High Street looking to Fairfield and Dollywagon Pike. From the summit, we headed over to the Eastern side of the fell to look over Haweswater and along Riggindale with binoculars out trying to spot the Golden Eagle. Oh dear, no wild ponies and no eagle!

and looking along the Roman road to The Knott and Rest Dodd.

A view along Riggindale to Haweswater. After returning to the Roman road, it was a simple climb to the summit of The Knott.

The Knott summit with Rest Dodd near left and The Nab to the right. From The Knott, a steep descent/ascent following the wall took us to the summit of Rest Dodd.

Rampsgill Head from the summit of Rest Dodd. Again from Rest Dodd, it was straight over the nose and onward over the difficult peat hag terrain of the Deer Forest to The Nab.

The peat hags of the Martindale Deer Forest and The Nab.

Rest Dodd from the summit of The Nab. Then it was back along the same peaty path to the wall - at last we were rewarded with the sight of a deer herd. We then followed the wall over to Satura Crag and then skirted Angle Tarn to ascend the northern top of Angletarn Pikes quickly followed by the southern top as the rain set in.

and Place Fell from the northern top of Angletarn Pikes.

Angle Tarn from the southern summit of Angletarn Pikes. Skirting around the other side of Angle Tarn, we ascended directly to the summit Brock Crags with views over Hartsop and Brothers Water.

Brothers Water from the summit of Brock Crags. From Brock Crags, we followed the old wall straight down to Hayeswater Gill and picked up the grassy path between two walls which led us back to Hartsop.

Did we really climb straight up the face of that! - Gray Crag from the descent of Brock Crags.

The Eskdale valley from Border End.