There was an arctic blast again today with snow and hail falling on the higher ground and the wind was biting to say the least. It was very quiet on the fells, I didn’t see a soul anywhere but I guess a lot of Cumbrians have fair bit of clearing up to do after the floods unfortunately. 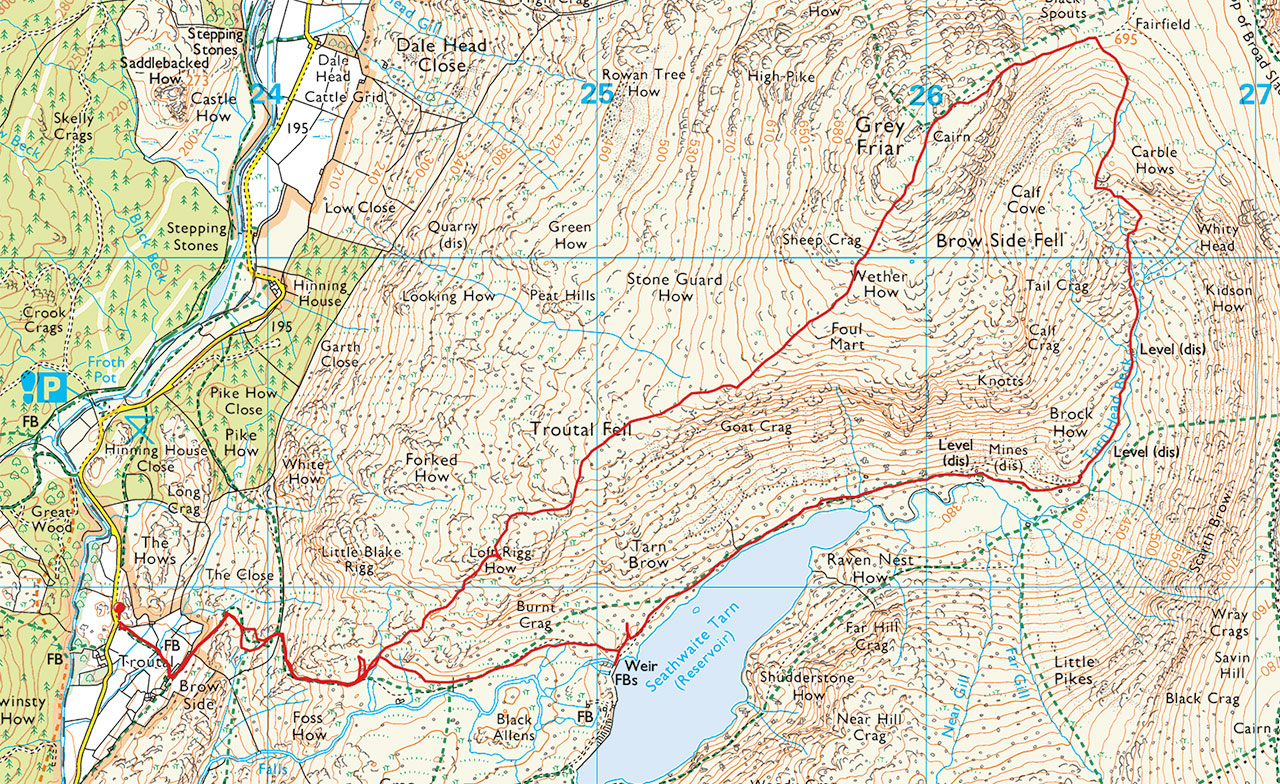 The start of the walk heading for Browside.

The grass gully that climbs to the south-west ridge.

Steeper than it looks.

Looking back down from the top.

There was the odd fleeting bright spell but the wind was a bit raw up here.

Harter Fell across the Duddon Valley.

Brim Fell and The Old Man.

On the summit plateau.

Swirl How to The Old Man.

Looking back towards the way just walked from the summit.

The view from the north-west cairn.

Looking towards The Langdales from Matterhorn Rock.

Which way Fletcher? Looking across the Fairfield col to Great Carrs and Swirl How.

Looking up Tarn Head Beck from the old mine workings.

Down at Seathwaite Tarn.

There wasn't a soul around today. 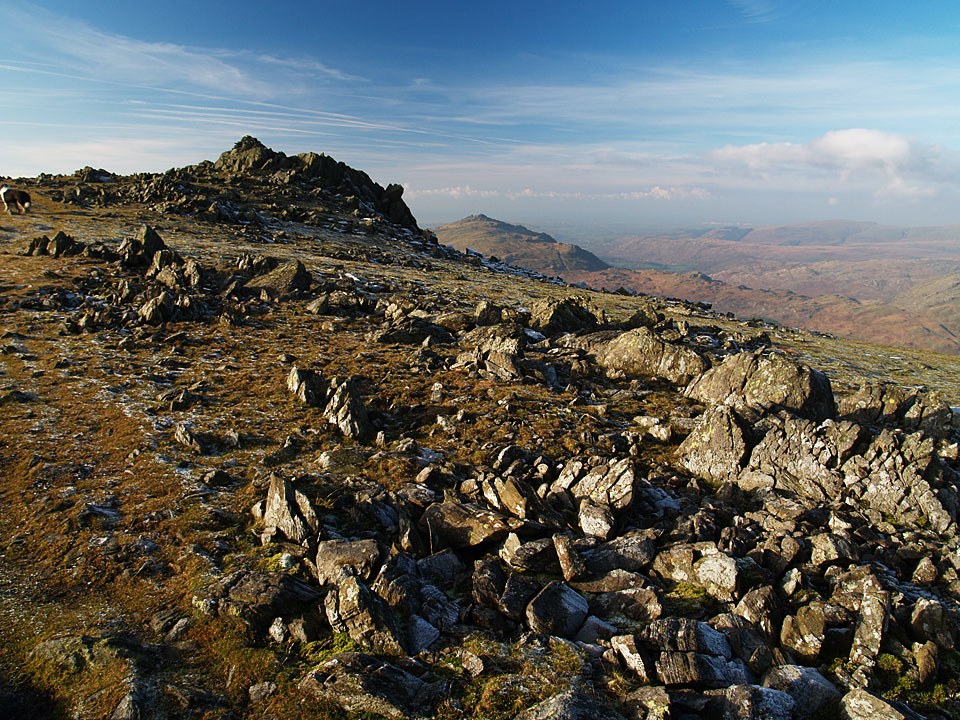 The summit of Grey Friar, Harter Fell beyond 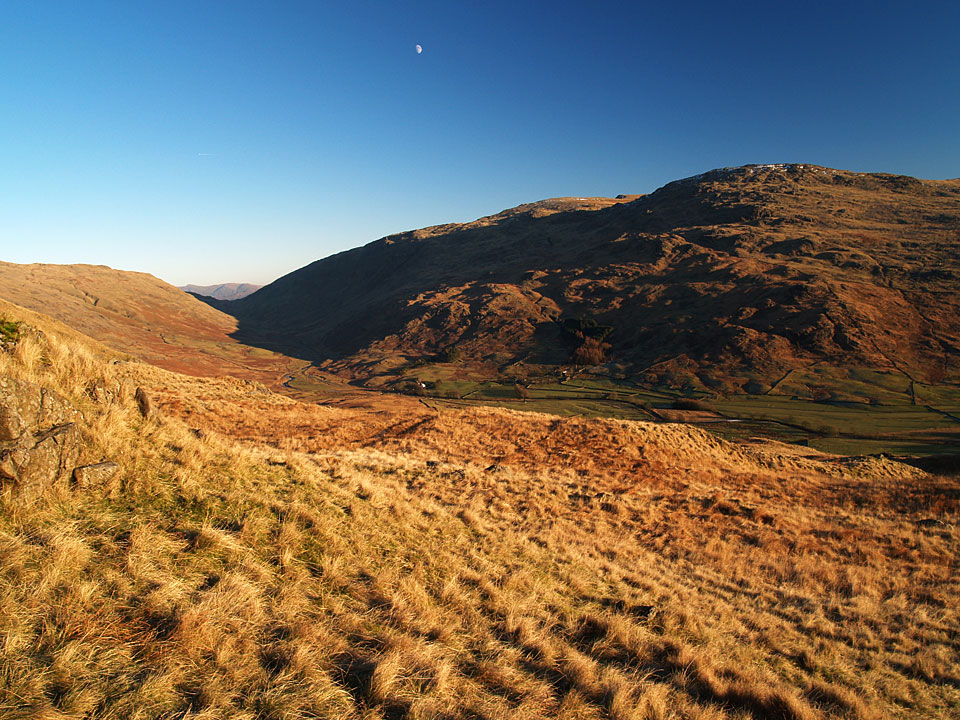 Grey Friar across Wrynose Bottom from the climb to Hard Knott

The Scafells from Grey Friar.

Today’s walk involved an early start to take in a round of the Coniston fells. It was a solitary walk today and there was no-one around and that wind was oh-so cold, I think I have forgotten what it can be like given all the recent warm weather we have had – brrr! This walk will feature in an issue of Trail Magazine soon. 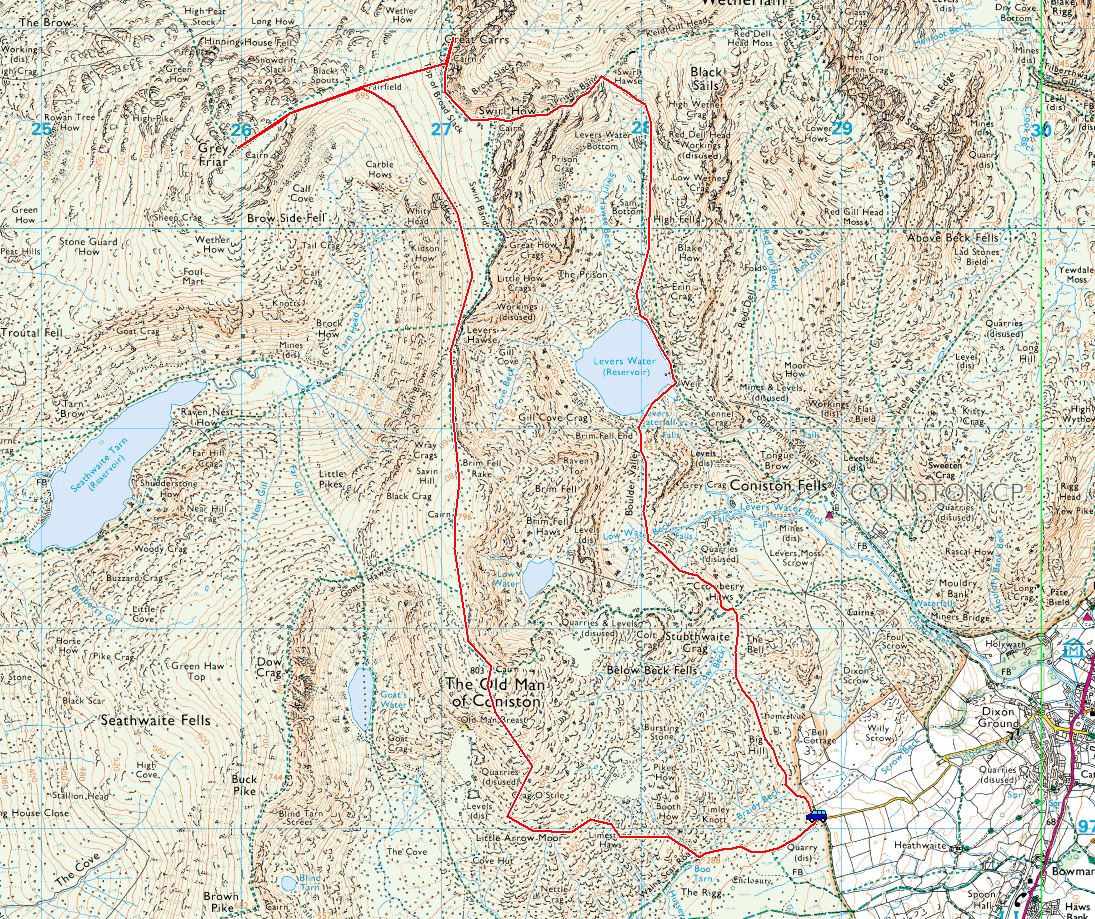 A beautiful evening. On with the walk...

Looking across Low Water to Wetherlam from The Old Man

Sky above the summit cairn

There was lots of cloud flitting across the tops today, here it can be seen blowing across Swirl How to the right

Looking back to The Old Man

Looking back from Brim Fell

Brim Fell and Dow Crag from the traverse

Swirl How, The Old Man, Brim Fell and Dow Crag all in a row

Atmospheric happenings over the Scafells and Bowfell

The descent of Prison Band, Wetherlam ahead

It was completely miserable this morning when I set off in full waterproofs and the rain was like stair rods. Still, how could I disappoint Dougal and Casper who were raring to go for this one? Once up at Seathwaite Tarn I could see it was clearing from the west, the rain clouds were blown away by the strong wind…as was I by the fact the day turned out so well after a wet start! The downside of the day was the Salomon ‘wonder boots’ let in after a prolonged walk through very boggy sections, especially on the return section. It’s back to the drawing board in search of the ultimate pair of boots I’m afraid!

Long House Gill and the rain was heavy at the start of the walk.

Harter fell across the Duddon Valley.

Approaching Seathwaite Tarn dam, Troutal Fell to the left and Swirl How ahead.

Would you 'Adam and Eve' it? Blue skies coming from the south, the clouds have been blown away by the strong wind.

All clear over Harter Fell across the Duddon Valley.

Close up on Harter Fell.

Doing the Dougal dance - the wind was very strong on the top.

Looking to the west Cumbrian coast and Sellafield across Harter Fell.

Looking towards the Langdale Pikes from the south easterly and main summit of Grey Friar.

Casper does the honourable thing and hides behind Dougal for shelter on the windswept summit of Grey Friar.

The Scafell range, from the north west cairn.

Looking across to Harter Fell and what a different day it is now to when I set off...apart from the wind of course, I could hardly stand up on here.

Casper watches the world go by.

Sunshine once more back at Brock How amongst the ruined Copper Mines.

Windy across the tarn.

The view from the dam wall to Harter Fell across the pump house.

It looks cold in there today.

A last look back before heading to the Duddon Valley.

I didn’t know what the weather would do today; it looked clear enough but the forecasts predicted otherwise so I opted for a circuit of the Coniston fells which seemed to be enjoying a decent amount of sunshine. Coniston Water was covered with a blanket of cloud as happens on this type of freezing morning but higher up it was a mix of wispy clouds and clear blue skies. The highlight was the fabulous stillness and reflections on Levers Water.

The Old Man of Coniston from the Walna Scar Road bathed in early morning sunlight. The high fells had a cap of cloud on them today.

Coniston Water was covered in a thick carpet of cloud...

...with the higher ground either side looking like islands in the sea. Beacon Fell is prominent on the right.

Climbing to The Old Man and into the mist.

An eerie light on the summit of a deserted Old Man.

Back out of the mist briefly in the dip between the Old Man and Brim Fell.

Descending to Levers Hawse. The north facing slopes haven't caught any sun yet so remain frosted.

Seathwaite Tarn and Harter Fell - yesterday I got a view looking the other way.

Great How Crags. We didn't climb here but took the faint path to the left, contouring the lower slopes heading for Grey Friar.

Looking back to The Old Man and Brim Fell, it looks like there has been an explosion up there!

It looks decidedly dull on the top of Grey Friar.

The summit of Grey Friar, Harter Fell beyond.

Looking back to Grey Friar, which is now clear, from Fairfield - the col between Grey Friar and Great Carrs.

The Scafells, Crinkle Crag and Bowfell are covered by a thick blanket of cloud looking from Great Carrs.

Casper on Swirl How.

Levers Water and Great How Crags.

The Coniston fells and Coppermines Valley.

That wasn’t supposed to happen! The weather was predicted to be the same as yesterday, blue skies and general loveliness above the clouds – however, rule #1 is there is no accounting for the weather. There was a strong wind and grey skies above the low lying fog with the upper clouds only clearing at the very end of the walk. This was a good long walk on the shortest day of the year and the fells were surprisingly busy today.

Walking along the Walna Scar road, we were quickly above the low lying cloud, here looking to Torver High Common.

At Cove Bridge, it was fairly obvious that this wasn't going to be a still blue sky temperature inversion day. Brown Pike is in the cloud beyond the bridge.

Coniston Old Man, the cloud sticking to the summit.

Once onto the Brown Pike - Buck Pike ridge the icy wind was really blowing up a gale. A fleeting gap in the clouds reveals Harter Fell.

Casper sticking his tongue out to the wind.

Looking back from Dow Crag to Buck Pike.

Descending from Dow Crag, the cloud clinging to Brim Fell.

Clear on The Old Man - for now, anyway!

The mist still hanging in the valleys to the south.

Grey Friar, Great Carrs, Swirl How and Brim Fell - all to be visited today.

Looking south over Goats Water in the lee of Dow Crag.

Approaching the summit of The Old Man.

The Old Man of Coniston.

The easterly view to the Furness Fells over Low Water shortly before being engulfed in cloud again. It was a cold, strong wind that blew walking along to Brim Fell and beyond.

Levers Water from Little How Crags after walking through the worst of the storm - but it was back into the mist for the climb to Grey Friar then Great Carrs and Swirl How.

Descending Prison Band to Black Sails and Wetherlam from Swirl How.

On the way to Wetherlam, the clouds parted and blue sky and sunshine appeared to the east. Behind, Coniston remained under brooding skies.

The Langdales under a thick blanket of cloud, Blea Tarn centre.

The mist still clinging to the valleys.

The sky is ever clearing.

Looking back along the furrowed path to Wetherlam.

The southern end of Windermere still under a blanket of cloud.

The sun continued to shine for this morning’s ascent to the north-west cornerstone of the Coniston fells, Grey Friar. There was a strong, icy breeze blasting down from the fells across Seathwaite Tarn and it felt a lot colder than yesterday.

Grey Friar, standing apart from the main Coniston fells, gives magnificent, uninterrupted views of the Sca Fells and  a great view of Harter Fell and westwards out to the coast and the Irish Sea.

Looking along Seathwaite Tarn to Great How Crags.

Looking back along Seathwaite Tarn, Whitfell in the distance.

Dow Crag and Brim Fell from Fairfield, the col between Grey Friar and Great Carrs.

The Langdale Pikes from the pointed boulder on Grey Friar.

The Sca Fells from Grey Friar.

Angus on a cold and windswept Grey Friar summit, Harter Fell and the west Cumbrian coast with Sellafield in view are behind.

Caw and Stickle Pike along the Duddon Valley.

It was amazing how many tarns and stretches of water could be seen on this Coniston Round; they are shown on this page.

Boo Tarn, just off the Walna Scar road. This was nothing more than reeds and marsh.

Blind Tarn seen from Buck Pike. It is named blind because there is no outlet.

Low Water from The Old Man of Coniston with a glimpse of Levers Water to the north east.

Levers Water and Coniston Water from Great How Crags.

Seathwaite Tarn from below Swirl Band.