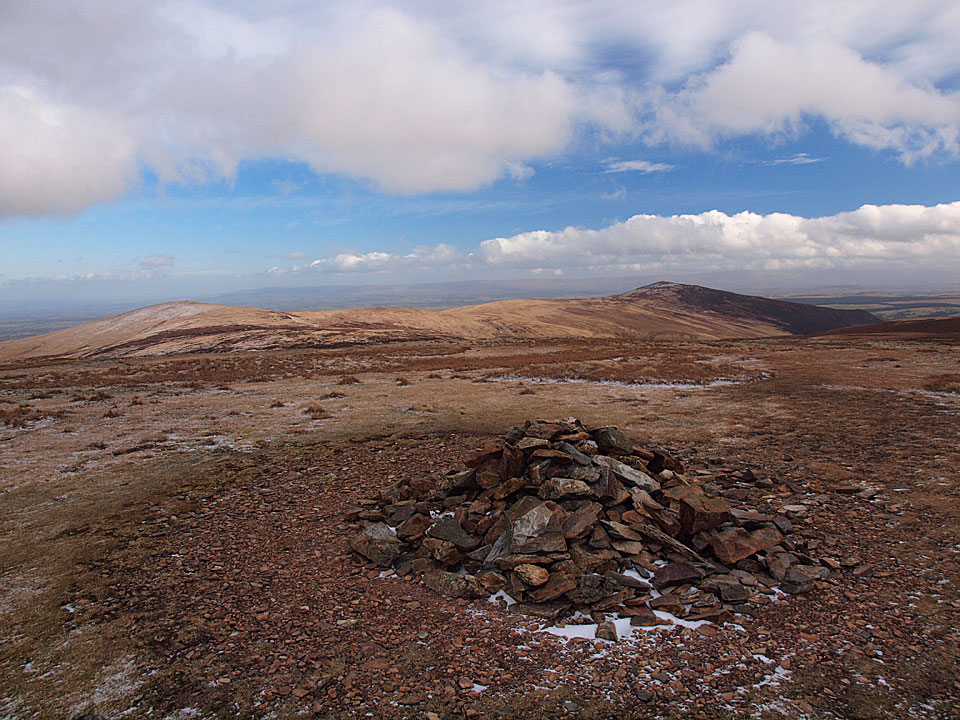 The summit of Knott, looking to High Pike and Carrock Fell

The prediction was for rain and strong winds today but it looked clear further north so I headed to Longlands to walk some of the Uldale Fells. The high fells have a fresh dusting of snow and even these ‘Back o’ Skiddaw’ fells had some lying on the tops. The wind was biting though and the skies to the west looked threatening throughout the walk.

It was beautiful and sunny at the start of the walk following the track from Longlands but the sunshine belies the temperature as there was an icy wind.

Behind there was lots of cloud building up to the west and the prediction was for strong winds and rain.

Heading for Charlton Wath, Brae Fell on the horizon.

Sunshine on the climb to Brae Fell.

Longlands Fell and Binsey from the climb.

Sunshine and wind for Casper and Dougal.

It's a very similar view from the summit of Knott, looking to High Pike and Carrock Fell.

Great Calva and the Back o' Skiddaw.

Moody and broody through the Glenderaterra Valley.

A glimpse of Bassenthwaite Lake.

Meal Fell and Great Cockup from Great Sca Fell - not today though Dougal, the wind has a real bite to it now and is becoming stronger.

The route to Little Sca Fell.

Skiddaw from Little Sca Fell with its sunken wind shelter.

Skiddaw, Bakestall and Dead Crags looking through the gap on the descent to Lowthwaite Fell.

Binsey and Over Water from Longlands Fell.

What a day! I passed through major rainstorms throughout the central Lake District to find it fairly clear behind Skiddaw. The tail end of Hurricane Gordon hit while we were up there today though, with very high winds and showers. Although it is usually relatively easy going, the fells being grassy and most unlike other fells in Lakeland, today the wind made the going much tougher.

The Uldale fells are known as ‘The Back o’ Skiddaw’ and are on the northernmost boundary of the Lake District. They certainly are off the beaten track and we completed this circuit without even catching sight of a single soul.

Longlands Fell from the bridleway. This was the last fell of the round later on.

The wind started to pick up during the ascent of Brae Fell and the sun was fleeting in and out. Casper has a look north over to Aughertree Fell with a ghostly figure behind...

It was soooo windy on the summit of Brae Fell. Casper and Angus are lying low - looks like Angus is in the right place, sheltering behind Casper.

The weather was not really conducive to taking photos - here is a quick shot of the way ahead to Little Sca Fell up to the right - taken full on into the wind. I could hardly stand up!

Looking back to a sunlit Brae Fell from Little Sca Fell.

Lowthwaite Fell and Longlands Fell from Little Sca Fell. In the distant left are Over Water and Binsey.

Heading to a mist covered Knott from Great Sca Fell.

Still windy and no view on the summit of Knott.

Angus fancies a walk over to Great Calva I think, but it's not on our route today.

The Uldale Fells from Burn Tod.

The sun fleeting in and out again on the steep descent of Burn Tod, here looking to the gap of Trusmadoor. Looking at this photo, it appears to be a nice day; I can assure you it was anything but! The strong wind made every step difficult.

Great Cockup, our next target.

Looking into Frozenfell Gill with Great Sca Fell at its head.

A broody looking Skiddaw from Great Cockup. Skiddaw never came from beneath this cloud blanket all day and it seemed to shelter these northern fells from the worst of the weather.

Meal Fell from the descent of Great Cockup with Little Sca Fell and Great Sca Fell beyond.

Having a rest in the wind shelter on Meal Fell.

Looking into a sunlit Frozenfell Gill.

Rainbow over Brae Fell from Little Sca Fell. The rain was in now, blowing fiercely from behind.

Charlton Gill and Brae Fell during a brief intermission from the rain - it is coming back in from the top right again, though.

Looking over Longlands from the descent of Longlands Fell, Aughertree Fell behind.

Weather: Sunny and warm with a slight breeze. 25°C.

Today’s walk was a long circuit of the quiet fells known as ‘The Back o’ Skiddaw’. The weather was very pleasant, not as hot and muggy as it has been recently with a slight, welcome, cooling breeze. The views were absolutely superb at times and I was glad I chose today to do this long walk. The only problem was I forgot my food and 26 miles is a long way without any fuel…

Early morning light on Carrock Fell. This was to be the last fell of the walk, some 11 long hours later.

Looking along the Mosedale valley.

Bowscale Tarn, keeper of two immortal fish so legend has it and mentioned by Wordsworth in his poem 'Song at the Feast of Brougham Castle', 1807. '...And both the undying fish that swim, Through Bowscale Tarn did wait on him, The pair were servants of his eye, In their immortality, They moved about in open sight, To and fro, for his delight...'

Strange light and a band of thick low lying cloud to the south from Bowscale Fell's subsidiary east top.

The north western fells seen between Blencathra and Skiddaw.

Skiddaw across the summit tarn on Blencathra.

The summit of Blencathra.

Skiddaw from that most derided of Wainwright fells (for not being a true summit), Mungrisdale Common.

Great Calva from the climb to Lonscale Fell.

The view from Lonscale Pike, the east peak of Lonscale Fell. In the centre is High Rigg with Tewet Tarn visible and Thirlmere behind.

There were superb, breath taking views from the climb up to Skiddaw.

The north-western fells from Skiddaw.

Bassenthwaite Lake and Sale Fell from Skiddaw. Not as cold as the last time we were here.

The view reached as far as Scotland over the Solway Firth to Criffel.

Binsey along the Dash Valley. To reach this point was another steep drop off from Bakestall down Birkett Edge and then a hard climb following the fence up to Little Lingy Fell.

The path to Knott.

A quick rest on Coomb Height, Carrock Fell in the background.

High Pike had a welcoming seat...

Evening light and the cloud begins to form on Skiddaw, seen from Round Knott.

A walk around The Uldale Fells today at the ‘Back O’ Skiddaw’. This area is a real wilderness and in the main the fells are grassy hummocks. A place of solitude, I didn’t see another soul today.

Binsey from the summit of Orthwaite Bank.

The Dash Valley from the ascent of Little Cockup.

Looking across to Longlands Fell and Lowthwaite Fell from Little Cockup.

Skiddaw Little Man, Skiddaw and Bakestall in the foreground from the summit of Great Cockup.

Skiddaw and Bakestall through Trusmadoor from the ascent of Meal Fell. My descent from Great Cockup was the path coming down diagonally from the right while later, on the return, I descended Burn Tod from the left of the photo, crossed Burntod Gill, and followed the path towards Skiddaw.

Little Sca Fell and Great Sca Fell across Trusmadoor from the summit of Meal Fell.

Brae Fell, Little Sca Fell and Great Sca Fell from the grassy hump that is the summit of Frozen Fell.

Another contender for the smallest summit cairn in the Lake District, the solitary piece of quartz that marks the summit of Burn Tod. Sale Fell is in the distance on the far side of Bassenthwaite Lake.

Skiddaw and Bakestall from the bridleway that runs to Orthwaite.

'The Boulder' mentioned by Wainwright in The Northern Fells - Great Cockup 2, with Burn Tod behind.