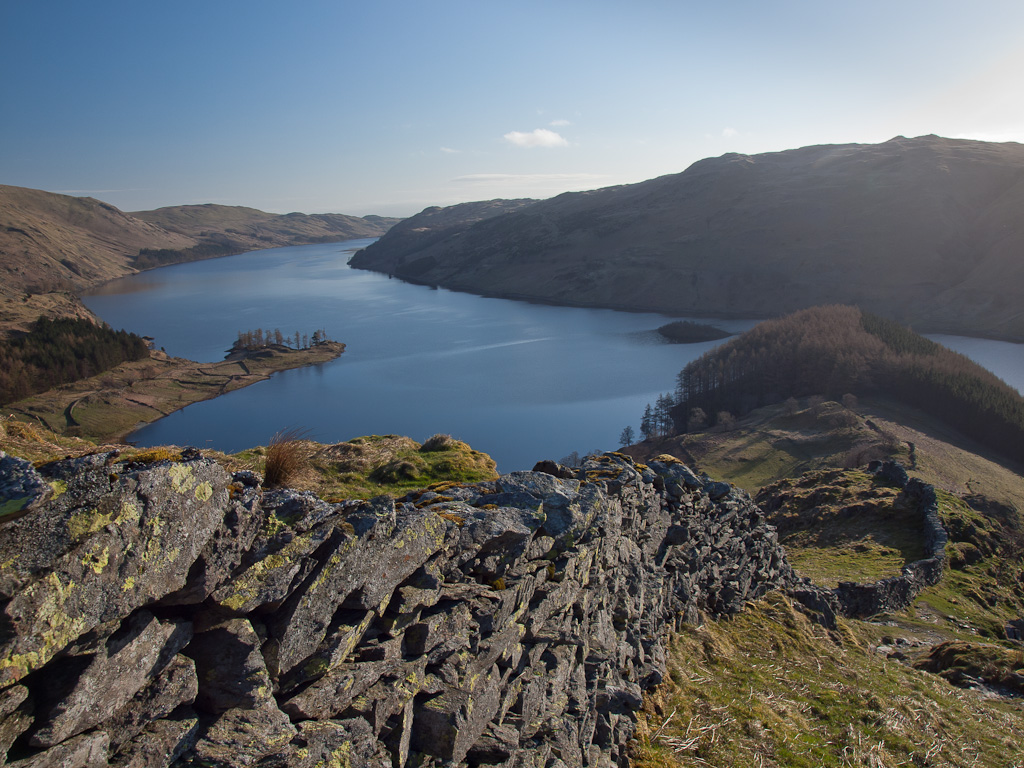 Haweswater from the Rough Crag ridge 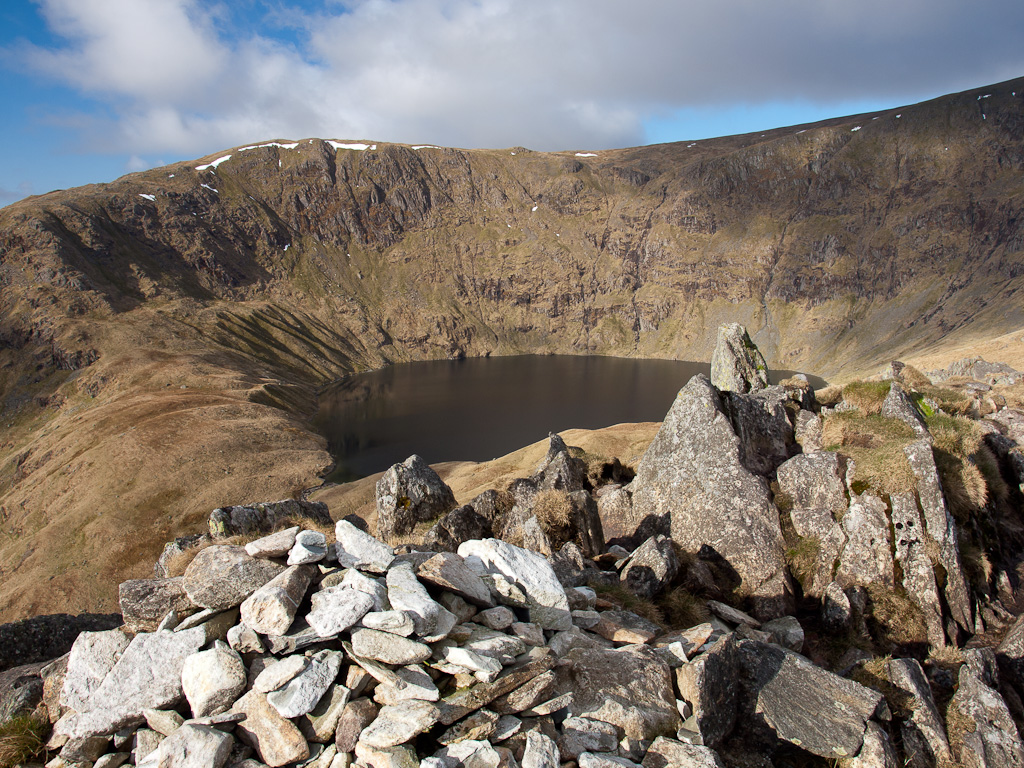 It was beautiful this morning, very still and sunny and it was pleasantly warm climbing Rough Crag but as soon as I got to the High Street plateau it was covered with cloud which made it feel a lot cooler. It was a great day for it though and we were in total solitude throughout with just deer and sheep for company.

Haweswater from the Rough Crag ridge.

Harter Fell from higher up.

Small Water is nestling somewhere in the combe to the left and Mardale Ill Bell.

A glimpse of Small Water.

There were some lovely sunny spells and it was quite warm when the sun was out.

On High Street though it was suddenly cloud covered and felt a lot cooler.

Looking back to High Street.

Rest Dodd and The Nab with Ullswater catching the sun in the distance.

Low Raise...back in the sunshine!

Haweswater from the south-east ridge.

Descending the south-east ridge. If you find a lens cap along here it could well be mine!

The British Fort on the south-east ridge with Haweswater beyond.

The view from The British Fort.

On the way home, the head of Haweswater. Select on the image to see a larger version. This photo will be available as a premium canvas print, e-mail me if you are interested for sizes etc.

It was sunny and bright first thing this morning with hardly a cloud in the sky – fantastic conditions for a walk around Mardale Head. Once up to High Street, the clouds came in and made it all a bit flat and I felt in hindsight it might have been better walking anti-clockwise…but then again, who knows? You never can tell what the weather will do.

It's a lovely morning with sun shining at the head of Mardale.

The route from the road up to the north ridge of Branstree is certainly initially steep and direct. There is a great view over Haweswater into Riggindale, the rock in the foreground being the Hollow Stone.

High Street with a touch of snow on top from the old sheepfold.

Selside Pike from the north ridge.

The view to the west from the same place.

The summit of Branstree with a hot air balloon over Harter Fell.

Harter Fell from the descent of Branstree. The path used in ascent across Gatescarth Pass can be seen starting from the mid-left.

The path to Harter Fell.

Casper Wainwright (see Harter Fell 10, The Far Eastern Fells below). The benchmark in the Wainwright self-portrait can be seen on the rock in the photo. All you need now is a pipe Casper!

The summit of Harter Fell.

Looking back to Harter fell from the climb to Mardale Ill Bell.

Once on High Street, it started to cloud over. This view is to the western fells with the Scafells and Great Gable in the distance and Helvellyn mid distance on the right. That's an icy looking puddle!

The wall on High Street.

The flat top of Harter Fell from High Street.

Long Stile and Rough Crag, the route of descent.

Blea Water from the snowy eastern edge of High Street.

It has completely clouded over now looking back to High Street and Long Stile over Caspel Gate Tarn from Caspel Gate.

Colourful trees on The Rigg looking along Haweswater.

Autumn on The Rigg.

I nearly never bothered today, it was wet and miserable first thing this morning but a chance hearing of the weather report on the radio made me get out as it was supposedly brightening during the day. I could hardly believe my luck as I reached Mardale, for the sun was shining and the skies were blue. This was a really enjoyable round (helped by the weather of course!) taking the direct route to High Street via Rough Crag, walking along the Roman Road, trying and failing to spot the Riggindale Golden Eagles and finishing off on the ancient British Fort on Castle Crag above Haweswater.

The ridge route for today's walk over Rough Crag and up to High Street, here seen over Haweswater.

Harter Fell at the head of Mardale.

Mardale Beck in spate, as were all the watercourses in the area due to recent heavy rain.

Harter Fell from The Rigg.

Looking across Haweswater to Lady's Seat and Castle Crag, the route used in descent from Low Raise later.

Riggindale and the Mardale skyline.

Haweswater from the steep climb to Rough Crag.

Mardale Waters from the Rough Crag ridge - Small Water is in the cirque to the left, Blea Water in the one to the right.

Some warm Autumn sunshine on Rough Crag for Casper and Angus.

Haweswater Reservoir and Mardale from Rough Crag - Golden Eagles nest on the crags here, the only pair in England. The valley was flooded in the 1930's to create a reservoir for Manchester and the village of Mardale was lost under the water forever.

Looking back to Rough Crag, Branstree in view over the tarn.

Looking along Riggindale to Mardale.

Looking south-west to the Coniston fells in the distance, Red Screes and the Fairfield group in the middle distance.

A closer shot of Fairfield. Great Gable and the Scafell range are in the left distance.

The shadows of the three amigos looking to Hayeswater.

...and the uncluttered version.

Walking along the Roman Road to the Straits of Riggindale.

Ramps Gill from Rampsgill Head, The Nab to the left.

The eastern fells from Rampsgill Head.

We could hear the bellowing of the stags in Martindale Deer Forest below - they certainly caught the attention of Angus.

Looking across to the Helvellyn massif from the path to High Raise.

Fairfield from High Raise, Great Gable on the distant right.

Helvellyn from High Raise. Striding Edge is the ridge in the centre with Swirral Edge and Catstycam to the right.

The tumulus and cairn on Low Raise.

Haweswater from Lady's Seat and the magnificently situated ancient British fort atop Castle Crag in the foreground.

Haweswater from the ruins of the fort.

Still lots of sunshine for the boys to soak up.

This is the start of my quest to climb the 541 Birkett Fells!

The Boundary Stone at the summit of Adam Seat, 'L' on one side

'H' on the other (Longsleddale and Haweswater).

A rainbow over Small Water ('the finest of Lakeland's tarns), from the descent to Nan Bield Pass.

Mardale Ill Bell summit with Yoke, Froswick and Ill bell in the background.

Rough Crag and Haweswater from High Street. The area around the small tarn is called Caspel Gate.

Hayeswater and the distant Patterdale Fells from the Roman Road.

The mist swirls across High Street on the walk to Rampsgill Head.

Looking North from Rampsgill Head's summit. The Nab is to the left with Hallin Fell in the centre adjoining Steel Knotts. Ullswater is just visible right of centre.

The sun shines on Riggindale and Rough Crag.

A long meander of Riggindale Beck...

and the ruins of Riggindale Farm.