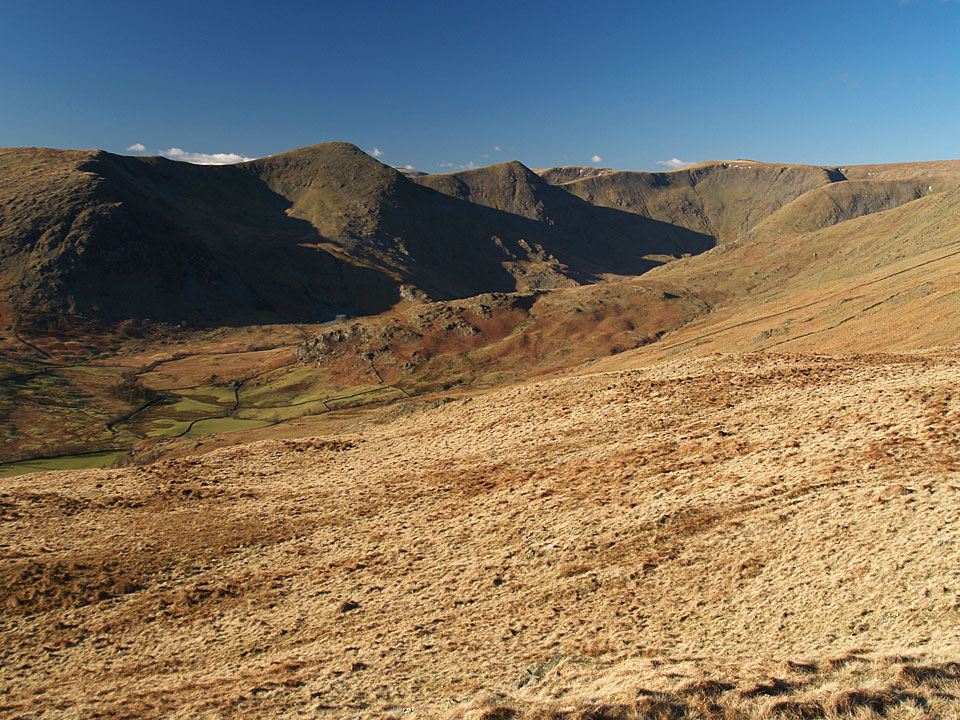 The good weather certainly deserted me this morning and the walk from Kentmere to the top of the Garburn Pass was completed in pouring rain. The weather improved by drying up but the tops were shrouded in mist throughout the walk, although the sun did have a good attempt at trying to burn through but never quite made it. There were no views and no other people around today.

Badger Rock in the rain.

Looking back to Kentmere.

Heading for Yoke - what's that over there boys?

A glimpse of Windermere from the 'motorway'.

Ill Bell - there are only two cairns standing now...

...although there are three 'monuments' in this photo. Cheer up Dougal, it might never happen.

Casper checks out Kentmere Reservoir below.

The summit of High Street.

Looks a bit clearer over on The Knott and Rest Dodd from the Roman Road.

In the absence of any views whatsoever, here is another dog/summit photo of Dougal on Mardale Ill Bell!

This is how to grade a path so that packhorses can get up them - the ancient track across Nan Bield Pass from Kentmere.

Shipman Knotts across the stile.

It looks a bit brighter now looking towards the Ill Bell ridge from Stile End.

Another fine and sunny day! It was even colder than ever in the valley this morning as temperatures struggled to get above zero – once up onto the fells however, it was really quite warm again in the sun. Only Casper for company today; Angus had a day off for a good sleep after the previous few days excursions!

Heading across to Yoke.

Looking back to Windermere, the early morning mist still hanging on the lake.

The Coniston fells from the southern end of Yoke.

Looking west to the Scafells.

The route ahead is Yoke, Ill Bell, Froswick and Thornthwaite Crag.

A lovely panorama from Yoke with Black Combe on the distant left, the Coniston fells over to Crinkle Crags and the Scafells with Great Gable and Pillar distant right.

Harter Fell from the frozen summit tarn on Yoke.

The route of the return leg - Mardale Ill Bell, the Nan Bield Pass and Harter Fell over Kentmere Reservoir.

The view from Ill Bell.

Climbing to Froswick, Thornthwaite Crag beyond.

Bow Fell with the Langdale Pikes in front and the Scafells.

Rest Dodd and The Knott across Hayeswater.

Casper on the summit of Mardale Ill Bell, Haweswater and The Pennines beyond.

Haweswater and the easterly view from Mardale Ill Bell.

Looking back to Thornthwaite Crag.

The flat top of Harter Fell ahead.

The climb to Harter Fell across Nan Bield Pass.

Looking back to Mardale Ill Bell and High Street.

High Street and Rough Crag with a glimpse of Blea Water from Harter Fell, Rampsgill Head and Kidsty Pike to the right.

The westerly view from the summit of Harter Fell.

Longsleddale from the descent of Shipman Knotts.

The day started off brightly for today’s long Kentmere Horseshoe walk with the grey clouds gathering by lunchtime and taking the edge off the fine views. There is still plenty of snow on the tops although it was warmer than of late. This is a fine round with great views in all directions.

Elevation profile of the route.

Yoke ahead, with Ill Bell and Froswick appearing to the left.

The Coniston Fells from Yoke.

The view along Windermere from the summit of Yoke.

Panorama of the way ahead from Yoke.

The sun shines on Yoke from Ill Bell.

One man and his dog on Ill Bell.

Ill Bell from the approach to Froswick.

The head of Kentmere from Froswick.

The view north on the way to Mardale Ill Bell.

A glittering Kentmere Reservoir with Yoke - Ill Bell - Froswick to the right.

Small Water and Haweswater from the descent to the Nan Bield Pass.

No need to use the stile with all the snow drifting against the wall on Kentmere Pike.

The wild ponies have come down to the valley for winter.

The Kentmere Horseshoe. Select on the image for a full size version.