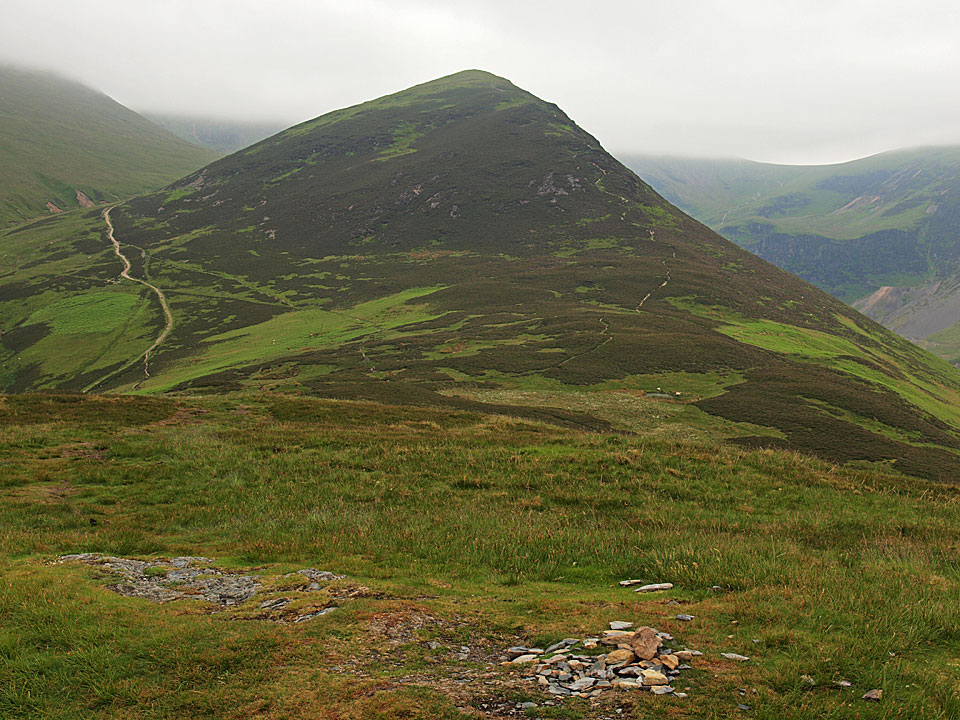 A heat wave was predicted for today and continuing over the weekend – well, it was indeed pretty warm but there was plenty of cloud cover around all morning with it only clearing (predictably) when I reached the end of the walk. It was a pleasant round though, not too warm and I was out early enough to miss most of the crowds that were sure to be out later.

Dullsville at the start of the walk, Skiddaw is under there somewhere.

A touch of brightness beginning to show on the climb to Grisedale Pike.

The mist was swirling and rising from the valleys now, looking across to Outerside and Causey Pike.

Sunburst through the mist.

Looking back at the path just climbed.

Dougal and Casper on the rivet that marks the summit of Grisedale Pike.

Looking back to Grisedale Pike.

Sunshine at Coledale Hause looking to Eel Crag on Crag Hill. That way straight up looks interesting and I have never been that way so I think a bit of a scramble is called for.

Yes Dougal, up that-a way! I enjoyed the scramble up here, it was a good way up.

Casper on the edge of Coledale.

The summit of Crag Hill.

Wandope and Sail Beck from The Scar.

The summit of Sail.

The descent towards Scar Crags and Causey Pike.

Looking across Coledale to Hopegill Head and Grisedale Pike.

A panoramic view from Causey Pike.

Sail and Crag Hill from Outerside.

Suddenly it is starting to clear up on the summit of Barrow.

A panoramic view from the descent.

Clearing skies now on the descent from Barrow.

Cooling off in Coledale Beck. Later, at Low Wood it is a beautiful day and 22C...

Today I had a shorter walk in the north, further afield than my usual shorter walks but as I was in the area on business, it seemed a shame not to combine the two. The weather was poor compared to the preceding two days, but needs must! This one is for Fred, he loved it up here and we talked about the area often.

Skiddaw under cloud and over the rooftops of Braithwaite.

The track to High Coledale, Barrow to the left, Causey Pike ahead and Stile End behind the tree.

Running for Stile End, Outerside on the right.

Time for a rest.

Dodd and the cloud on Skiddaw.

Close up on Dodd.

Casper and Dougal on Stile End.

Outerside and Stile End from the climb to Barrow.

The summit of Barrow.

The southern end of Bassenthwaite Lake and a distant Binsey.

Looking back from the descent to Barrow, Causey Pike and Stile End.

It was certainly a day of two halves today – the ascent to Grisedale Pike was done under dull skies with an increasingly cold wind that lasted until the descent of Sail when the skies ahead suddenly started clearing to reveal blue skies and sunshine. It wasn’t quite what we had last week, but I wasn’t complaining – it could have been much worse.

Skiddaw from the climb up to Kinn.

Looking across Coledale to Barrow and Causey Pike.

The steep ascent to Grisedale Pike.

Sail and Crag Hill at the head of Coledale, Force Crag mine workings below.

Looking back along the eastern ridge used to climb Grisedale Pike.

Looking back to Grisedale Pike from Hobcarton Head.

Whiteside from Hopegill Head, Crummock Water and Mellbreak in view to the left.

Looking across Coledale Hause to Crag Hill, the path used in ascent leads off to the right.

'She'll carry on through it all, she's a waterfall...'

The sun lights up Outerside from a misty Crag Hill summit.

Angus shows how windy it was on Crag Hill. It was a cold blast too.

As if by magic...blue sky and sun appear descending from Sail towards Scar Crags. Outerside, Stile End and Barrow are the three peaks in the centre with the bulk of Skiddaw and Blencathra beyond.

Causey Pike from Scar Crags. Blencathra is to the left then Great Mell Fell, Clough Head and Great Dodd.

Looking back along the ridge just descended to Crag Hill, the summit still in cloud.

Clough Head and Great Dodd across Derwent Water from the summit of Outerside.

Angus and Casper have a drink in the tarn on the way to Stile End.

Looking across Derwent Water to Bleaberry Fell with The Dodds and the Helvellyn ridge beyond, the skies still improving.

Bassenthwaite Lake and Braithwaite from the descent of Barrow.

A final view of Skiddaw.

Weather: Snow from the ascent of Grisedale Pike.

Today’s walk takes in a circuit of the Coledale Fells. The weather conditions didn’t look too promising from the valley, but it wasn’t so bad considering. The snowy, wintery conditions made a pleasant change from the recent downpours.

Looking towards Keswick and Derwent Water from the top of Kinn. Latrigg and Great Mell Fell are visible in the centre

Causey Pike and Scar Crags behind Outerside from the ascent of Grisedale Pike.

Snow clouds forming on the steep path to Grisedale Pike.

the summit cairn of Hobcarton End.

The clouds clear momentarily on Sand Hill to allow a glimpse of Crummock Water and Mellbreak, Grasmoor is to the left.

The Coledale valley from Coledale Hause.

A snowy Scar Crags on the descent from Sail.

Looking back along the Causey Pike - Scar Crags ridge from the summit of Causey Pike.

Barrow and Derwent Water from a blizzardy Outerside summit.