Weather: Bright, sunny and windy above the clouds. 7C

The same fells on a different day – the prediction was for a further temperature inversion to the south and west today, so where better than Coniston? I particularly wanted to see the sunrise across the inversion, always a special sight so I was glad I made the effort to get up early and witness this magical spectacle. 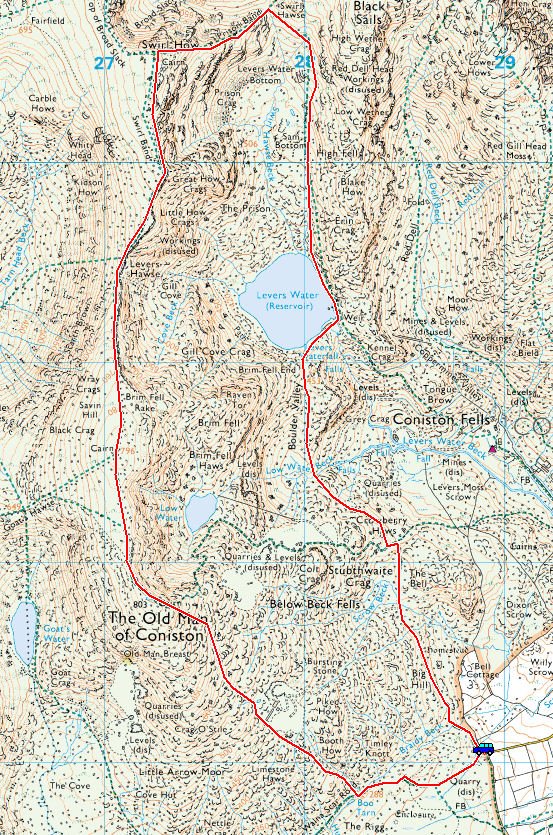 This was the sunrise, it was a little disappointing at first as there were clouds below and above. I was surprised at how low the cloud was as I climbed above it just out of Coniston village.

That's better, as the sun shone through things certainly changed with this beautiful warm glow. The inversion clouds started to lift as it warmed, almost following me on the climb to The OId Man.

This was just fabulous to watch and it was an ever changing scene with the movement of the clouds and fog.

I only took about 100 photos of the sunrise (!) so it has been hard to whittle them down to a handful.

The sun climbs higher and you can see the lifting cloud looking like crashing waves on the sea.

It is turning into a beautiful day now but conditions were different to yesterday. As it was earlier in the day it was a lot cooler but it was also surprisingly windy at the top...so it was jacket and gloves back on.

The view to the south west.

The Scafells from The Old Man.

Looking down on Low Water and Levers Water.

Looking across Brown Pike and Blind Tarn to Black Combe.

Dougal keeps an eye on proceedings.

I told you it was windy!

Heading for Great How Crags and Swirl How across Levers Hawse

Lingmoor Fell standing proud from Swirl How, Silver How and the vale of Grasmere beyond.

Taking a dip in Levers Water.

The Old Man and Raven Tor from the dam wall.

Brim Fell End marked the end of the clear air before the descent into the clouds.

On the edge of the lifting clouds.

The cloud was beginning to lift further with the heat of the day and was pouring across Levers Water.

Time Lapse video of the inversion