The wind did howl and the rain did pour this morning for our walk to Caudale Moor. I had intended to go further on this walk but it was so wet and cold I’d had enough after I reached Hartsop Dodd. I think Fletcher came of age today with his first taste of some proper fell weather! 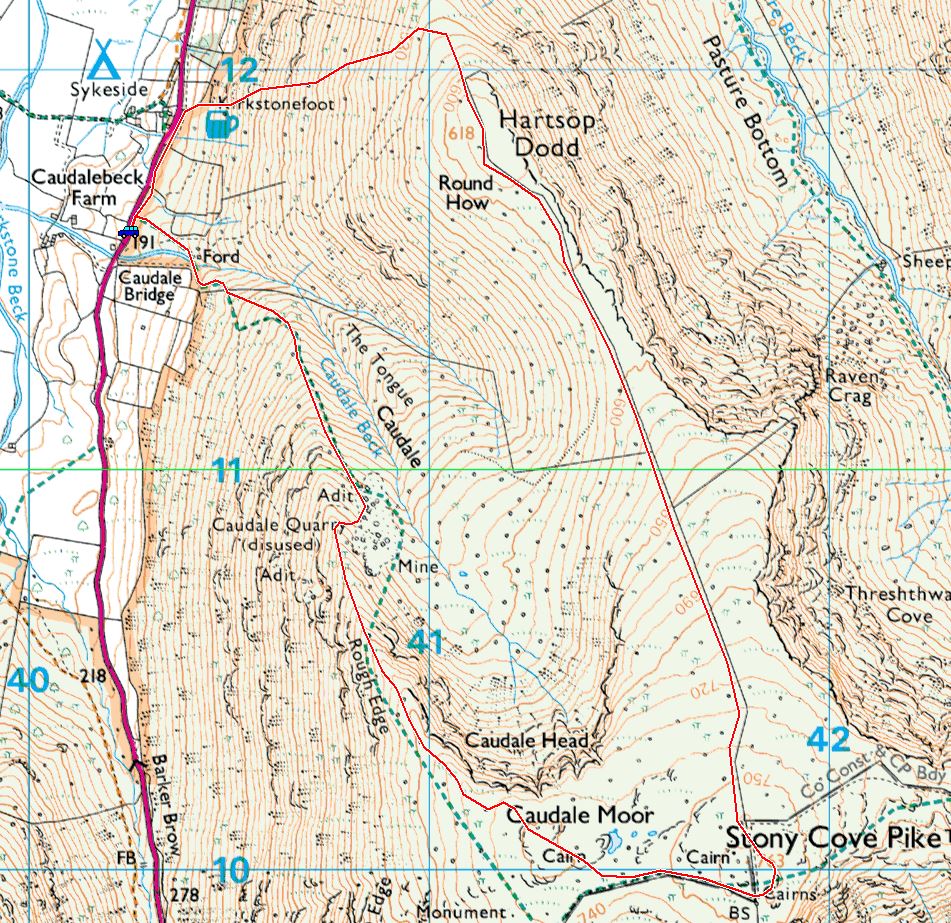 Looking to Middle Dodd - up until this point it had been absolutely chucking it down but the sky here shows the promise of a decent morning...perhaps.

Today's route up to Caudale Moor.

Looking down the strange deep groove that is a feature of this climb.

Kirkstone Pass and Red Screes, walking in a blizzard now.

Looking to Hartsop Dodd with a glimpse of Brothers Water and Ullswater into Patterdale.

The view from Caudale Head.

Damp dogs on Stony Cove Pike, the summit of Caudale Moor. I think Fletcher has found a good hiding place from the wind and rain behind Dougal.

Twa dogs at the summit of Hartsop Dodd (full of cheery smiles too!), the old post marking the summit.

A view into Dovedale.

Brothers Water from the steeper than steep way down from Hartsop Dodd and the only bit of sunshine to be seen all day.

Watching me watching you. 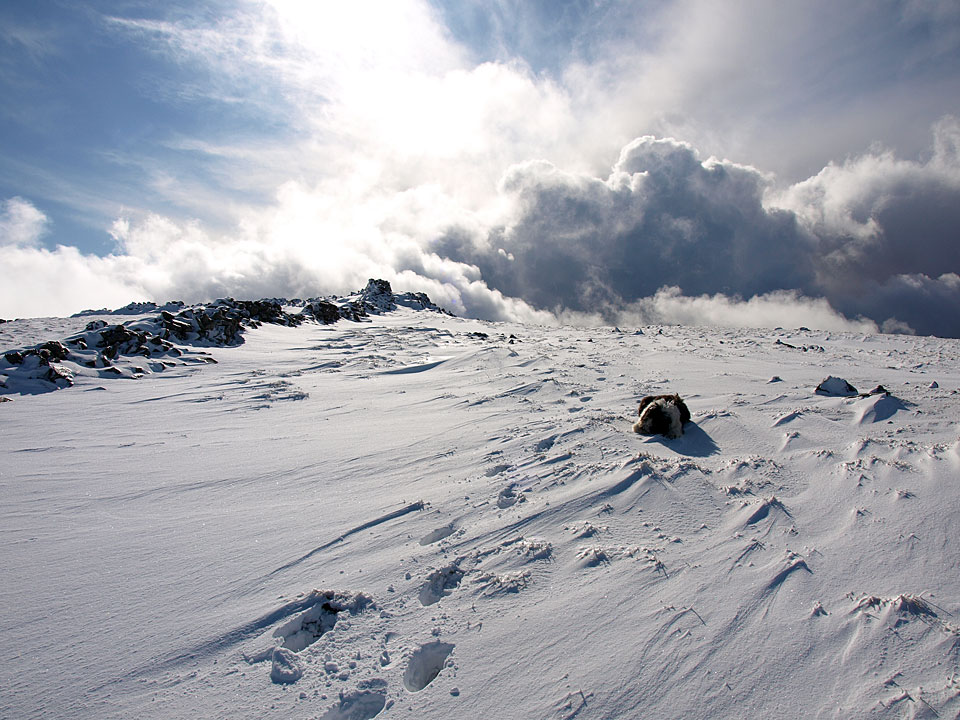 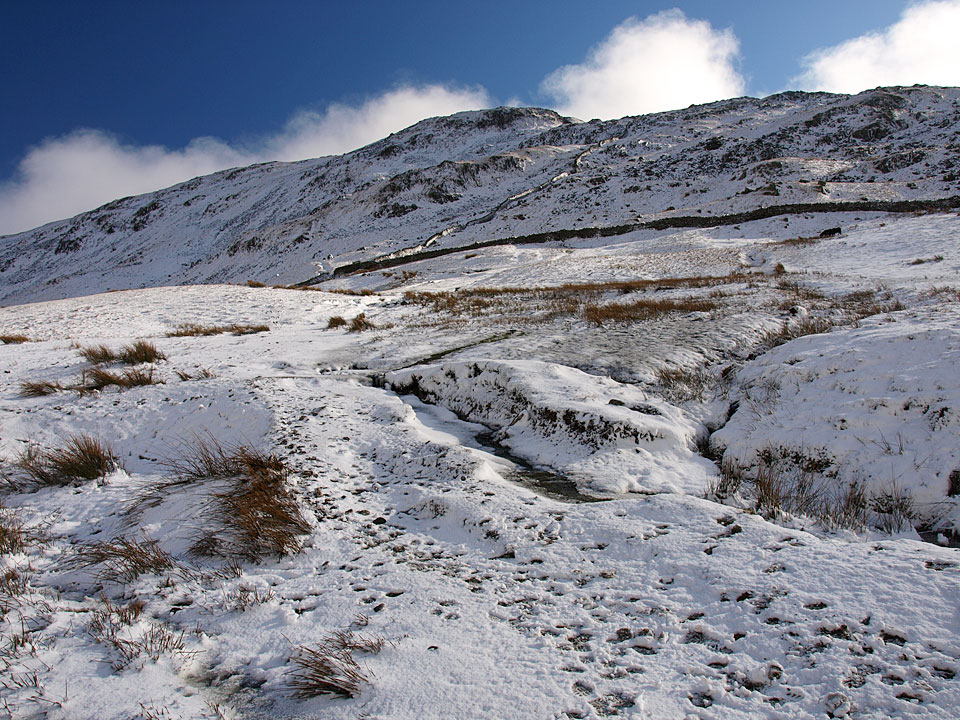 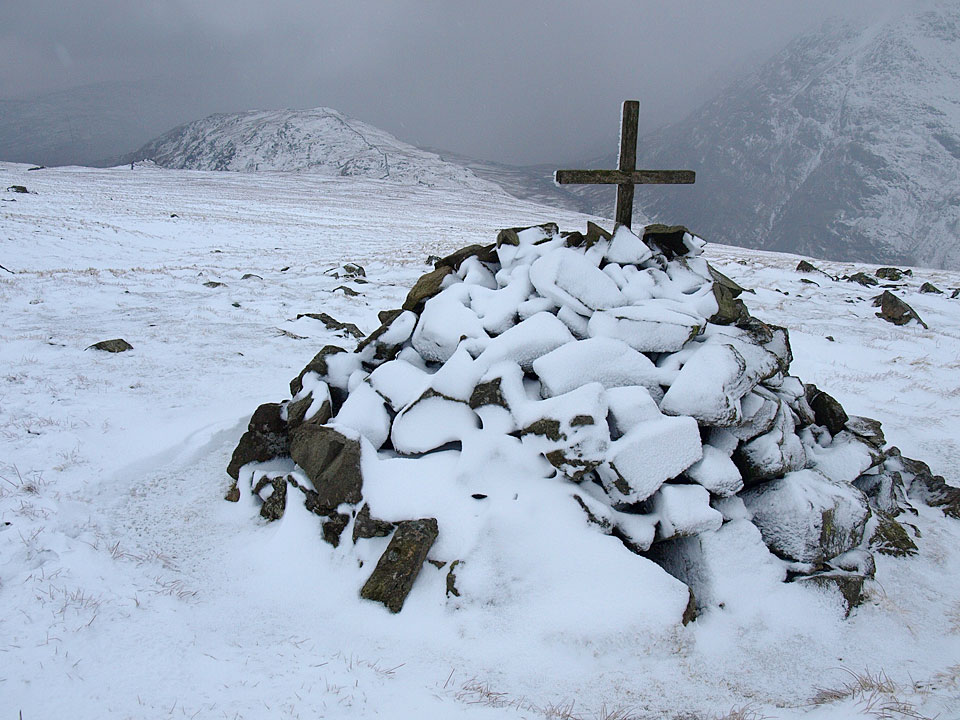 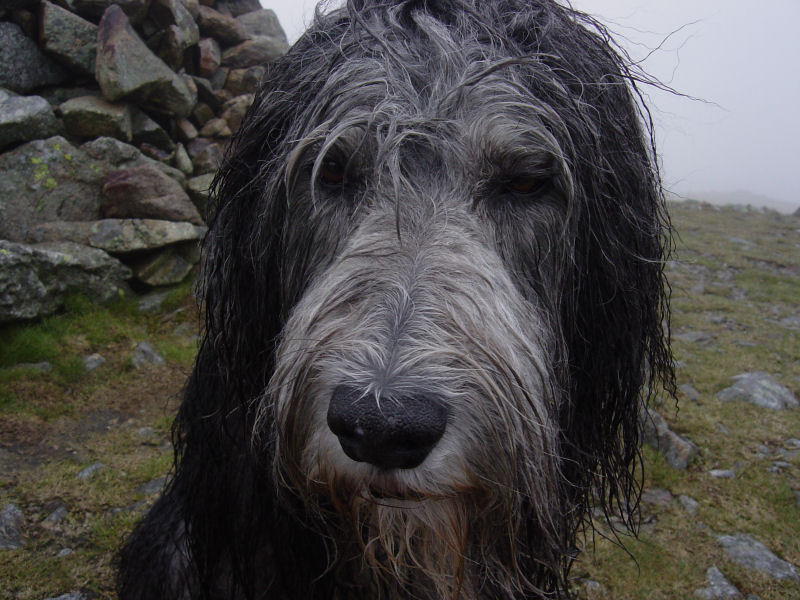 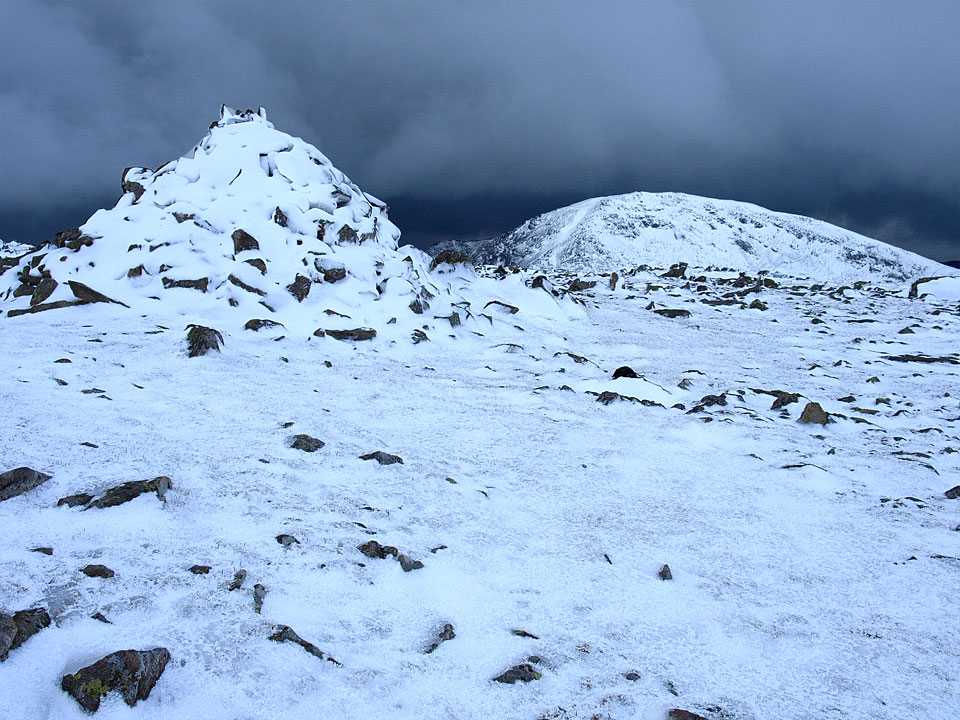 It is all looking very dark to the south looking to Red Screes from the cairn that marks John Bell’s Banner.

This certainly wasn’t a route I had in mind today but when I got over Kirkstone Pass this morning, the descent was littered with stuck cars on the icy road. I certainly had a hairy moment or two going down there but managed to avoid a collision and hastily turned round and went back the way I came. The fells to the east of Kirkstone Pass looked quite clear so I thought I would walk over Caudale Moor but I guess the walk was always going to be a strange route, there being no other obvious route of return. Those who know the Lake District know how changeable the weather can be and today was no exception with it changing seemingly by the minute.

Beautiful blue sky to the north with a distant Place Fell ahead, Caudale Moor to the right.

The climb to St Raven's Edge.

Once up there, the cloud rolled in from the south making it distinctly cold up here. The way to Caudale Moor is along the line of the wall.

"Punctured (b)icicle on a hillside desolate" (song anyone?)

Climbing to Pike How.

A break in the clouds over Park Fell.

Casper gets snowed in.

An eerie light with the sun shining through the clouds on Stony Cove Pike, the summit of Caudale Moor.

It's brought a smile to Casper's face anyway!

Suddenly - into the clear sky after a walk of no more than 10 metres north from the cairn. It was crossing a weather line, so marked was the difference.

You can see the line of cloud ahead in this photo.

Plenty of snow in them still, I reckon.

It is a lot clearer to the north.

The Helvellyn fells are getting a bit of sunshine as well.

Looking across to John Bell's Banner from the descent towards Hartsop Dodd.

The descent to Hartsop Dodd, following the wall once more with Ullswater directly ahead.. There is less snow over on Place Fell to the right.

That's quite a big descent to get to Hartsop Dodd, once more continuing along the line of the wall.

The clouds are brooding over Caudale Moor and Rough Edge with Red Screes now in view.

Casper finds the post that marks the Wainwright summit of Hartsop Dodd.

Catstycam across the summit cairn.

If you look closely you can see the snow coming in now on the return leg to Caudale Moor, looking into Dovedale.

Now that I've left the summit, the sun is shining on Hartsop Dodd once more. The two sets of footsteps are both mine - inward and outward.

It is all looking very dark to the south looking to Red Screes from the cairn that marks John Bell's Banner.

St Raven's Edge from Mark Atkinson's Memorial. The rest of the return leg was walked in a very heavy snow shower.

I didn’t know what to expect today, I certainly didn’t expect any clear photos as it was raining so much! As I went over Kirkstone Pass, there was a certain amount of clarity around Hartsop, so that’s what I settled on. The clouds were hanging around in thick layers in the valleys but eventually it lifted to cover the tops and the highest part of the walk was completed in the mist.

Clouds hanging on the side of Angletarn Pikes.

At the bottom of Hartsop Dodd, the steep ascent is straight up alongside the wall.

Looking over to Saint Sunday Crag across the low lying clouds.

Looking over Brothers Water to Dovedale.

A glimpse of Ullswater through the clouds in Patterdale.

Looks like it is clearing out a bit over Patterdale now.

Brothers Water and Hartsop above How with Saint Sunday Crag beyond.

Angus and Casper on Hartsop Dodd.

Looking back to Hartsop Dodd summit from the ridge walk to Caudale Moor....and that was it! It was up into the clouds onto Caudale Moor, remaining in them descending to Threshthwaite Mouth, up to Gray Crag and along the ridge.

Out of the clouds at last and over the steep descent of Gray Crag.

The top of Hartsop Dodd in cloud now beyond this old barn.

From the Western fells yesterday to the Far Eastern fells today and a shorter walk. The climb from Hartsop to Hartsop Dodd is severe, but at least you gain height quickly! The clouds came down along with the rain to obliterate the view for most of the walk. Still, it was nice to be out with a small landmark for Angus in his Wainwright fell-bagging quest.

Shapely Hartsop Dodd - the way up was following the wall from the left to its highest point and then straight up the ridge to the summit.

The approach to Hartsop Dodd.

Patterdale from the ascent. Ullswater is in the distance, the village below is Hartsop.

Rest Dodd, The Knott and Gray Crag with Hayeswater Gill running between them.

Brothers Water with the Hartsop above How ridge behind.

Dovedale with a low cloud ceiling.

Looking across to Brock Crags with the knobbles of Angletarn Pikes behind.

The wind drops - I can hear the water in the beck below and the distant sound of a dog barking.

Into the mist, wind and rain - so bad it stings your eyes and hurts your face. The wooden post marks the summit of Hartsop Dodd and this is Wainwright number 200 for Angus.

It was icy cold on Caudale Moor - the wind still howling.

The blown drizzle immediately turned to ice on the grass.

Crossing a beck at Pasture Bottom.

Evidence of glaciers - the rock debris left behind and drumlins in the distance.

Remains of old mine workings.

The heavens had opened when I set off this morning for the climb up to Caudale Moor on the eastern side of Kirkstone Pass. There were no views and it was quite miserable until I descended to Troutbeck where the sun came out – and of course shone on the places I had just been! This was a boggy affair due to the amount of rain and coupled with one or two tricky river crossings, it made for a very damp day.

This view of Woundale just about sums up the first half of the walk!

Waterfall on Woundale Beck. After this it got very confusing in the mist and I ended up getting slightly off course....

...when I realised I was descending to the Kirkstone Pass Inn, seen here from St. Raven's Edge.

Pasture Bottom from Threshwaite Mouth, Ullswater in the distance.

Angus gets picked on by a lamb. The lamb thought he'd found a new 'mum' when he spotted Angus and proceeded to follow us.

Windermere and the Troutbeck Valley from Troutbeck Tongue.

Woundale at the end of the walk. Compare the conditions with the first photo above.

Brothers Water from the ascent of Hartsop Dodd.

Ullswater from Hartsop Dodd, Arnison Crag on the left and Place Fell to the right.

Looking along the wall to Caudale Moor from Hartsop Dodd. Red Screes is to the right.

Caudale Quarry on the side of Caudale Moor, Red Screes behind.