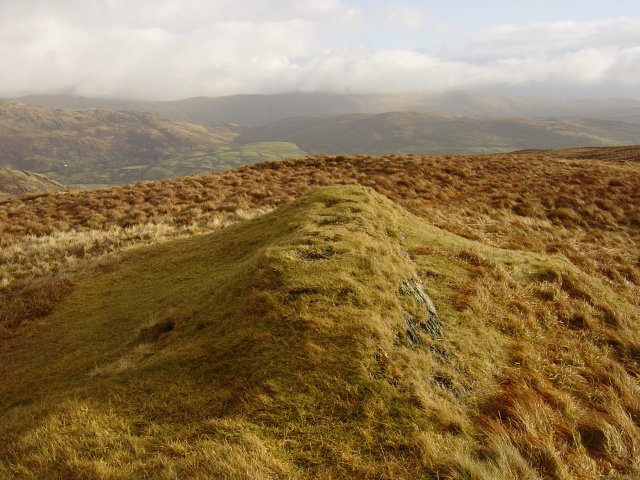 The Kentmere Horseshoe fells from Sallows

Heading for Sallows from Sour Howes.

Hopefully, everything is returning to normal for most in the Lake District whilst further north at Cockermouth and Workington, things will take a little longer to straighten out. We walked a couple of the smaller Far Eastern fells today, Sour Howes and Sallows. We started the walk in the rain but surprisingly it brightened up towards the end of it and there was even a sprinkling of snow visible across on the western fells.

First we had to scale this new Lake District summit at the foot of the Garburn Road! This pile of shale was washed down from the track across the road last week. The Garburn Road was deeply rutted making going (especially in descent) a bit tricky at times.

Troutbeck Park from the Garburn Road.

Looking across Troutbeck to a misty Wansfell.

The head of Troutbeck Park from the climb to Sour Howes.

It is all a bit drizzly at the moment.

I think that shower is heading straight for me.

A panoramic view of Windermere.

Miraculously, Troutbeck is bathed in sunshine below while beyond the ominous clouds are hanging over the western fells.

Following the wall to Sallows and it is raining heavily now.

Over to the west though, there is sunshine with a fresh sprinkling of snow on Bowfell with the Langdale Pikes to the right.

The cloud drifting across Yoke. Perhaps that sunshine will come this way.

Dougal and Casper on Sallows.

Looking towards Coniston from the summit mound of Sallows.

Red Screes and the ribbon of the Kirkstone Pass road below it.

The skies are clearing over Sour Howes to the south now.

Sunshine and a clear view.

Casper takes in the view from the descent back to the Garburn Road.

Water spout on the way down.

Sunshine through the trees in the old quarry.

Troutbeck Park, a clearer view than at the start of the walk.

After a dull start it eventually turned sunny and bright but it was so cold this morning. A step change I thought and Autumn is most definitely upon us now. This is quite a gentle walk and I managed to pick up a Birkett straggler – one that I had somehow managed to miss previously. I don’t know what has happened to the cairn on Sour Howes, somehow it has completely disappeared without trace.

Troutbeck Park from the Garburn Road, The Tongue centre.

Getting higher up the Garburn Road.

Looking across to Scafell, through the Three Tarns gap, and Bowfell.

The Coniston fells from the climb to Applethwaite Common.

Windermere from the ridge.

The sky is clearing now as the sun gets higher giving clear views.

A close-up of Bowness and Windermere.

Crinkle Crags, Scafell and Bowfell. Pike o' Blisco can just be seen to the left of the first Crinkle.

Casper on the summit of Sour Howes. The cairn that used to be here has disappeared so Casper will have to do instead!

The view to the north from Sour Howes.

Sallows from the top of Capple Howe. I managed to miss this new (for me) Birkett last time round.

The western fells over Wansfell Pike.

Red Screes with the Kirkstone Pass road below.

The Kentmere Horseshoe fells from Sallows.

Yoke over the Garburn Pass.

Casper on the summit mound of Sallows, Kentmere Pike beyond.

Scafell Pike now visible in the distant centre, Great End over the Langdale Pikes to the right.

Descending to the Garburn Road.

Black Combe and the Coniston fells from the Garburn Road.

Weather: Clearing throughout the walk, ending with sunshine and blue skies!

Today’s walk is a short round from Troutbeck to two tops on Applethwaite Common, namely Sour Howes and Sallows. The weather started clearing almost as soon as I set off after initially being rather overcast…hooray! There are superb views along almost the whole length of Windermere and along Troutbeck Park throughout the walk.

Elevation profile of the route.

The Garburn Road at the start of the walk.

The clouds start to lift from Coniston Old Man and Wetherlam.

The ascent to Sour Howes.

Windermere from the summit of Sour Howes.

Caudale Moor and the Kentmere Pikes from Sour Howes. The wall running from the centre up to the right leads to Sallows.

Soaking up the sunshine on Sallows summit mound, Kentmere Pike behind.

Wansfell Pike and Wansfell from Sallows.

Looking along Troutbeck Park from the Garburn Road. See below for an annotated version of this photo.

A fine day with some low lying cloud.

Troutbeck Tongue in the sunshine, Yoke in the clouds.

Windermere from Sallows with Sour Howes in the foreground.

The summit mound of Sallows looking East to Longsleddale.

Mines a.. - set in stone off the Garburn Road

Waterfall on the descent of Sallows.

Looking up Hagg Gill and the High Street Roman Road, Caudale Moor on the left, Thornthwaite on the right.

Looking over to Heron Pike and High Pike from Troutbeck Tongue.

Caudale Moor behind Troutbeck Tongue and on the right, Thornthwaite, Froswick, Ill Bell and Yoke from Ing Lane.

Sallows on the left and Sour Howes on the right from the ascent of Wansfell.

Windermere from Wansfell, as Wainwright's drawing.