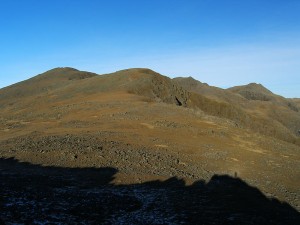 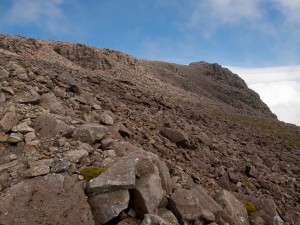 I had a full day available today so I wanted to do a good long walk – I did think the weather would turn out better than it did but it was still good to be out and walking in mist has its own merits of complete solitude, even on the popular fells such as this.

I fancied a bit of a scramble today so I headed for the Scafells from Eskdale in beautiful weather to do just that. The Little Narrowcove route is a steep one but straightforward and Lord’s Rake and Deep Gill were as good as ever. I was out early today so there were not so many people around; Casper did manage to get spotted on the descent from Slight Side though, and it is always a pleasure to bump into StridingEdge followers up on the fells. 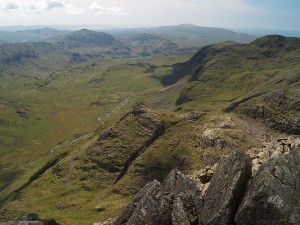 The sun finally shone today for this personal favourite walk to the Scafells from Brotherilkeld via Upper Eskdale and Great Moss. Conditions were almost perfect with the warm temperature and a light breeze and hardly a soul about apart from the usual congestion on Scafell Pike summit. I didn’t take Angus today as this sort of walk is too tough for him now, but Casper came and managed to take it all in his stride. I hope you enjoy today’s photographic journey as much as I enjoyed being there – what better place to be on a Monday morning? 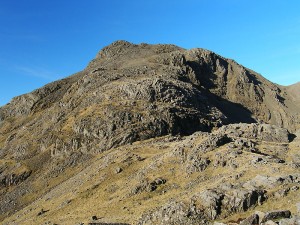 The weather turned out even better than I was expecting today – I thought it would be clear, but it was unbelievably so and very warm with a temperature inversion to boot! I have been ‘saving’ this walk for a while which includes a steep scramble up to Pen, a subsidiary summit of Scafell Pike, and the scrambles of Lord’s Rake and the West Wall Traverse. It is for this reason that the walk had to be Angus-less; he would never have managed it today. As it turned out, it was one of the most memorable days I have ever had in the fells – one to remember. I make no apologies for the number of photos included in today’s walk – there could have been lots more, it was so hard to weed them out. I hope you enjoy it as much as I did. 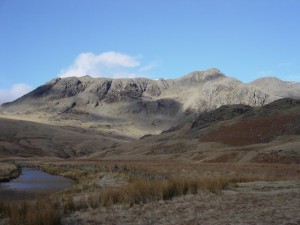 A clear start with mist coming in as the day progressed. The highest tops were enveloped in cloud with intermittent snow.